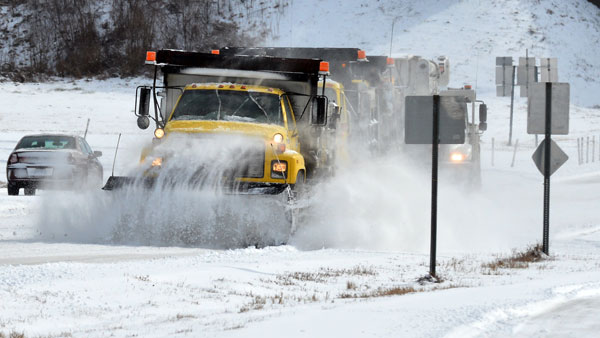 Multiple plows work on Highway 70 in Goldsboro, North Carolina, after a January snowstorm. North Carolina is one of a growing number of states using apps to help protect citizens’ health and safety during snowstorms and other emergencies.

Beth Stevenson was worried about the snowstorm approaching North Carolina this past January. She needed to travel from her home in Raleigh to the coast for business and feared that some of the roads would be impassable.

So she pulled up ReadyNC, an app she recently downloaded on her smartphone that showed her exactly which roads were open and what the weather conditions were like.

“Being from North Carolina, we don’t handle snow very well and it was a pretty bad storm,” said Stevenson, 31, a communications consultant for an energy company. “It was really good to know which roads were the safest to travel and which were closed.”

The ReadyNC app, launched by the North Carolina Department of Public Safety shortly before last January’s storm, is one of a growing number of state apps designed to protect citizens’ public health or safety, instead of just targeting tourism, recreation or licensing requirements.

During disasters such as snowstorms, hurricanes or floods, the ReadyNC app provides users with real-time data about road conditions, flood levels, power outages and evacuation areas. It also identifies the closest shelters, indicates which ones are full and lists those that accept pets.

The costs to states are minimal: North Carolina paid a contractor $53,000 to develop ReadyNC, but there are no operational costs because the information is pulled from data that government agencies compile already, and from other public sources. Minnesota paid a company $6,000 to design its new air pollution app, and it spent $10,000 this year to maintain it.

“Three or four years ago, the conversation among state agencies was that apps were add-ons: nice to have, but not critical to the mission,” said Doug Robinson, executive director of the National Association of State Chief Information Officers (NASCIO). “Now we’re definitely seeing that mobile solutions are becoming more critical to the delivery of services.”

When it comes to offering the coolest app technology, cities have been in the lead for years. In Boston, residents can use apps to photograph and report potholes, graffiti and broken streetlights. The reports are immediately routed to city agencies, and residents can track their status. In New York, app users can find out exactly what time the next subway train will be arriving. In Chicago, they can get real-time locations of city plows during a snowstorm.

While states have lagged behind cities in developing sophisticated apps, they have been making steady progress.

“States are catching up a little bit. They traditionally have been more focused on policy and less on direct service delivery than local government, particularly in a one-to-one relationship with citizens, but that’s changing, “ said Todd Sander, executive director of the Center for Digital Government, a research and advisory organization that works with state and local governments on information technology issues.

Sander said that in the past, many state apps were merely extended versions of static pages from websites because they were easy to create and popular among users.

“Now the technology is better and states are making more time-critical, time-sensitive information available because they’re better at creating and deploying the apps,” Sander said. “And people are expecting it.”

Among the state apps focused exclusively on health or public safety:

More state agencies that oversee health or emergency management have recognized that they need to embrace mobile technology to stay connected with citizens.

“It’s a natural progression,” said Theresa Pardo, director of the Center for Technology in Government at the University at Albany, a research center that focuses on innovation in government technology. “I think these new apps are really powerful. What underlies them is a massive effort to identify and integrate in sophisticated ways data that is relevant to an individual, particularly in the event of a crisis.”

Communicating critical, life-saving information during emergencies and directing the public to services after disasters is an enormous challenge for states, said Karen Cobuluis, spokeswoman for the National Emergency Management Association, the professional association for state emergency management directors.

“Apps and social media have become useful tools to help get real-time and reliable information into the hands of those who need it,” Cobuluis said.

Julia Jarema, spokeswoman for the North Carolina public safety department, said that was what her state had in mind when it released its ReadyNC app, which currently has 26,000 users.

“The more prepared we can get everybody, the better off we’re all going to be during a disaster,” Jarema said. “We want people to get that information in real time, so if there are pop-up floods in the area and we are opening shelters or they are doing evacuations or there are roads that are blocked, they can get information easily and right away. This gives them the information at their fingertips.”

In Minnesota, the state’s Pollution Control Agency released its real-time air quality app last summer, promoting it in news releases and featuring it in an exhibit at the Minnesota State Fair. The app gives users real-time information about ozone and fine particles levels.

Project manager Rebecca Place said that the app is especially significant for groups such as children and people with asthma and other respiratory problems, who are particularly sensitive to air pollution. They can check the app before they head out and avoid outdoor activities when ozone levels are high, she added.

“It’s a really good idea,” added Bob Moffitt, communications director for the American Lung Association in Minnesota. “It’s very important for people who are especially vulnerable to air pollution to be aware of the events day to day, whether it’s ozone or particulate pollution.  I think every way we can get the word out is a good step.”

A Long Way to Go

While states are moving rapidly to make advances in digital technology, they still have a long way to go when it comes to overseeing their apps and mobile device projects.

The association’s Robinson said that most states today don’t have an “enterprise-wide, well-coordinated roadmap” for investing in and deploying mobile technology. “It’s serious for the states because of the implications. There’s no shared strategic direction,” he said. “We need to address how we’re managing mobile devices.”

Robinson of NASCIO said that in many states, apps are being launched agency by agency, which creates more complexity. Plus, states often lack the in-house technical expertise to develop their own apps, so they’re forced to use outside contractors.

“Mobile management is a point of pain because it’s very difficult to get your arms around all the things that are going on in the various agencies within the state,” Robinson said. “The challenge is that if it’s not being done in a well-orchestrated manner, you may have wasted opportunities. You need broad guidelines that define the rules of the road.”