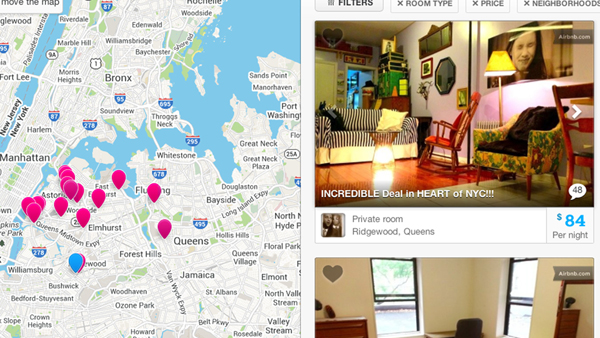 A screen shot from Airbnb’s website shows a typical listing of rooms to rent, in this case in the Queens borough of New York. States are looking to tax new entities like Airbnb and Uber that slip through old laws.

Ronald Reagan once famously derided the outlook of Big Government as: “If it moves, tax it.”  As America’s economy turns from goods to services, state and local governments are taking the former president’s bromide to heart in their hunt for new revenue.

From short-term room rental services like Airbnb and FlipKey and rides in private cars like those coordinated by Uber and Lyft, governments are trying to bring new services into the taxable fold. While the so-called “Amazon tax” on Internet purchases led the way, state and local governments are now moving into taxing room rentals, bowling, yoga classes, barbershops and gym memberships.

In New York, California, Oregon, the District of Columbia and some other jurisdictions, these new taxes are being sold as a fairness issue. Why, the argument goes, should a hotel room at the Marriott be subject to a “room tax,” and not a room in someone’s home rented through Airbnb or FlipKey?

There is a lot of money at stake. According to the U.S. Travel Association, business and leisure travelers spent a total of $887.9 billion in 2013, supporting 7.9 million jobs and generating $134 billion in taxes. More than half of the spending was on lodging and transportation.

Perhaps the most controversial move to tax services is in cities, in particular San Francisco and New York, to tax the room rentals organized by Airbnb and other agencies that coordinate short-term rentals of rooms – or even a whole dwelling – of private homeowners. These services range from a small bedroom in a house in the city to an entire beach house. The key is that these are private residences, not hotels or commercial bed and breakfasts, and that difference has allowed them to escape regulation as well as sales or hospitality taxes in the past. But no longer.

In New York, state regulators went after Airbnb on two fronts – taxes and safety. State Attorney General Eric Schneiderman ordered Airbnb to turn over records so prosecutors could figure out whether the owners of rental properties had been collecting hospitality taxes and paying state income taxes on their earnings.

After an intense legal fight, Airbnb eventually reached an agreement with the state to turn over the records, but not to reveal the names of the renters so they wouldn’t be taxed retroactively. The attorney general has a year to look at the records.

In a move mirroring Amazon, Airbnb decided to drop its fight over the sales tax issue. In a blog post titled: “$21 million more for New York,” Airbnb’s David Hantman, head of global public policy, wrote: “Our community wants to pay its fair share, and we want to help. If leaders in Albany change the laws to make short-term room rentals specifically legal the Airbnb community could contribute more than $21 million in taxes (annually) to the city and the state – money that could be used to support programs for education, health, housing and public safety. That money could make a real difference for New Yorkers.”

The amount of occupancy tax on a hotel room is calculated by combining the state and local tax rate, along with any specific local taxes. The hotel occupancy tax in New York City is 5.875 percent.

Other states and cities, notably Portland, Oregon, and San Francisco, have reached deals with Airbnb to collect the occupancy taxes, though most other jurisdictions around the country have not yet done so. A move in Chattanooga, Tennessee to rezone a neighborhood to allow short-term room rentals was approved, partially because the city council noted tax revenue was being lost to “underground” rentals and now it could tax these legal rentals.

An Airbnb spokesman would not elaborate beyond the blog post, but the company is valued at $10 billion and might decide to make a public stock offering in the future. It would not want to be on the bad side of regulators, should that happen.

“The reason they are not fighting on taxes anymore is because they don’t want two fights,” said David Brunori, a public policy professor at George Washington University who analyzes tax policy. “They don’t want to fight the regulatory fight and the tax fight. The tax fight is a loser in the long run,” he said, predicting that legislatures or courts would eventually rule that the taxes are legitimate and must be collected.

When Amazon decided to stop fighting the collection of state sales taxes on Internet sales, it was partially because the company is so well established and has distribution and other facilities in so many states that it’s almost easier to collect sales taxes for the 45 states that levy them. Current law requires a business to collect sales tax for any state in which it has a “nexus,” or a business location. Federal legislation on Capitol Hill has gathered steam in recent years that would require the collection of all sales taxes, but it has not yet passed.

Airbnb also has decided to start collecting San Francisco’s 14 percent hotel tax (as posted on their blog), as well as to work with the city of Portland, Oregon, to pay transient lodging taxes.

In the District of Columbia, the city’s 5.75 percent sales tax will apply to gyms, tanning salons, yoga studios and bowling alleys starting in January— despite an outcry from local health clubs that it is “taxing people who want to be healthy.”  To soften the blow, D.C. officials are combining their new taxes on services with an income tax cut for all but the very wealthy. The city council is set to vote on the new taxes as part of its budget this month.

Lee Schalk, state affairs manager at the National Taxpayers Union, a nonprofit group that works to keep taxes and government spending lower, isn’t opposed to expansion of the sales tax. “Some would say it’s a fair way to do it; to expand the sales tax base as opposed to increasing income taxes. Some folks would say everyone should be paying the same sales tax rate,” Schalk said.

Norton Francis, a senior research associate at the progressive Tax Policy Center, said states and cities are “losing tax revenue because of these new forms” of services like in-home room rentals or privately arranged rides. “The product isn’t any different, it’s the delivery,” he said. “States are one step behind commerce in an effort to try to maintain their tax bases.” He said states and cities also don’t want to stifle development of these new services, which provide jobs.

This type of business is more similar to an annual yard sale rather than a regular commercial enterprise, Francis said. “Garage sales are not generally taxed,” he said. “But once it becomes a commercial enterprise, once it’s not me putting a sign on a telephone pole, but me joining a group to rent out rooms in my house, it’s a business, not … something you do once a year.”

In North Carolina, for example, a tax overhaul took effect at the start of this year, which lowered the personal income tax to a flat rate of 5.8 percent, scrapping the three-tiered system of 6 percent, 7 percent and 7.8 percent. At the same time, the state decided to tax services like automobile and appliance service and repairs, as well as movie, concert and live events tickets. The state also eliminated some business tax deductions as well as the Earned Income Tax Credit for low-earners.

When it comes to ride services like Uber or Lyft that compete with taxis and limousine services, the question has mostly been about overall regulation, though loss of tax revenue is also worrying state and local jurisdictions. The CEO of Sidecar, another ride-sharing service, predicted in June that car ownership will be cut in half in a decade. While that prediction may be self-serving, any loss of new car sales would reduce tax collections.

A recent study by the Center for Automotive Research showed the automobile industry raised $91.5 billion in state and local taxes in 2010. Sales of new vehicles meant $15.8 billion in state sales taxes in 2010, according to Debbie Menk, assistant director of sustainability and economic development strategies at the center.

She said that any prediction of loss of new or used car sales and tax revenue due to ride-sharing is premature. “This could be somewhat akin to predicting the impact of the Internet or smartphones before either existed,” she said, “Or it could be a flop.”

Democratic Colorado Gov. John Hickenlooper earlier this month signed a law that will bring the ride services under the same regulations as other vehicle transportation. The law subjects car-share companies to regulations under the state Public Utilities Commission. Hickenlooper said his state is trying to balance the value of new commerce with the safety of riders.