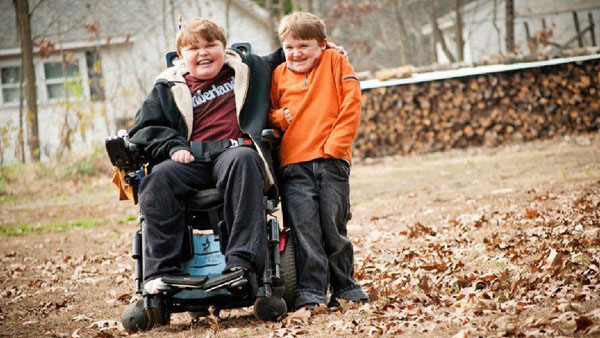 Austin Leclaire, 15, and his brother Max, 12, of Pembroke, Massachusetts both have Duchenne muscular dystrophy, but only Max is in a clinical trial and receiving developmental drugs for the disease. (Justin Ferland Photography)

Fifteen-year old Austin Leclaire and his brother Max, 12, of Pembroke, Massachusetts, share the deadly degenerative disease Duchenne muscular dystrophy. But over the course of the past 144 weeks, the boys’ physical conditions have progressed in opposite directions.

Max has regained functions – he has abandoned his wheelchair and can now run, tote his own backpack to school and even ride a bike. Austin’s capabilities are diminishing. He cannot walk at all, and he’s lost the ability to brush his teeth or hold a water bottle. He expects that soon he won’t be able to play drums anymore, one of his few remaining physical pleasures.

The difference in their  trajectories is that Max has been in a clinical trial for nearly three years, during which he has been given weekly infusions of the experimental drug eteplirsen, manufactured by Sarepta Therapeutics Inc. Austin was deemed unqualified to get the drug because of his more advanced condition.

Withholding experimental drugs from the most gravely ill has fueled several states to pass so-called “right-to-try” legislation that would make these drugs available without Food and Drug Administration approval to terminally ill patients with no other options.

Some critics of the years-long FDA drug approval process, with its requirement for multiple clinical trials, contend that it is much longer than it should be, thereby keeping some promising drugs from those who might benefit, particularly those, like Austin, with time running out. The Tufts Center for the Study of Drug Development says it normally takes 5½ to 10½ years for a drug to receive FDA approval.

Because of that, Colorado, Missouri and Louisiana all passed right-to-try legislation this year that would enable those with terminal illnesses and no other treatment options to secure investigational drugs before final FDA approval if the drug manufacturer is willing to provide them. Arizona voters will decide a similar measure in a referendum in November.

The legislation passed overwhelmingly and with bipartisan support, often after lawmakers heard anguished testimony from terminally ill patients or their families.

The laws would cut the FDA out of the process, at least in terms of a single, terminally ill patient. The decision would be left entirely in the hands of the patient, the doctor and the drug company.

Whether these laws would withstand a court challenge is an open question. Typically, state laws cannot supersede federal statutes. Even if the laws don’t withstand a challenge, advocates say, they may serve a valuable service in spotlighting the issue.

“(A lawsuit) wouldn’t be all bad news because it would further elevate this issue in the public arena and put pressure on Congress and the FDA to make this change and literally save thousands of lives every year,” said Frank Burroughs, head of the Abigail Alliance for Better Access to Developmental Drugs, which he founded 13 years ago after his 21-year-old daughter died of cancer.

So far, only Colorado’s law has taken effect, a little over a month ago. The Goldwater Institute, a conservative nonprofit that defends states’ rights,  created the model legislation for the new laws.  While it has received word of interest, no patients have yet formally tried to receive an experimental drug under the new law, the institute said.

Under FDA rules for drug testing, Phase One, the first studies to use human subjects, is quite limited in the number of patient participants (typically 20 to 80, according to the FDA website on the drug approval process). This first step is intended to determine the drug’s most frequent side effects and how the drug is metabolized and excreted.

If Phase One doesn’t reveal unacceptable toxicity, the drug can be approved for Phase Two trials, where the emphasis is on testing the effectiveness of the drug. This stage can involve a few dozen to 300 patients. If the drug passes muster, it goes onto Phase Three, which gathers additional evidence on safety and effectiveness and involves from several hundred to 3,000 subjects.

In the Leclaire brothers’ case, those selected for the trial had to still be ambulatory most of the time, but with the expectation that their walking days would end within a year, said Jenn McNary, the boys’ mother. Max fell down occasionally, but he still didn’t need the wheelchair most of the time. Austin no longer qualified.

So even as Austin has watched Max get stronger from the drug treatments, he wonders what motor skill he will lose next. And while he hopes s one day to earn degrees in mechanical engineering and zoology, he is aware that those with his condition rarely survive their twenties.

“I’m glad that Max has (the treatments), and he’s proving that it does work, and I should have it, too,” Austin said by phone from home. “But it’s also unfair…. I’m just really upset that the FDA won’t approve the drug, and it’s their fault that someone might die.”

The FDA has taken no official position on the new laws. “While the agency is supportive of patients’ access to experimental new treatments, the FDA believes that the drug approval process represents the best way to assure the development of safe and effective new medicines for patients,” an FDA statement said.

Although there are already provisions in place that allow for expedited approval of drugs and to make certain experimental drugs available to individuals prior to final approval, the Goldwater Institute insists that even those procedures take too long for a person whose time is running out. “A lot of patients don’t have five or six months” that those procedures take, said Victor Riches, a Goldwater spokesman.

The FDA  said it receives about 550 applications a year from drug companies to supply drugs to individuals before final approval and agrees to nearly all of them.

But that doesn’t account for patients who have been turned down by manufacturers, such as Holly Singh, a Texas second grade teacher whose 14-month-old daughter Harper has spinal muscular dystrophy, which leaves her incapable of picking her head up, crawling or rolling over. Without help, her life expectancy is quite limited.

Singh applied to Isis Pharmaceuticals, developer of the promising drug, ISIS-SMN-rx, which is soon to enter Phase Three clinical testing, for early access to the drug. In turning down her request, Isis chairman Stan Crooke raised the possibility that granting it could have prolonged the overall testing program and delayed the drug’s approval for other patients. He also said that all the safety concerns had not been fully addressed.

Singh’s correspondence with Crooke demonstrates her desperation.  She wrote, “What kind of mother would I be if I just told my child, ‘I'm sorry that there's a drug, but unfortunately you can't have it.  You just need to suffer a little while longer.’"

While sympathetic to the situation of individual patients, the pharmaceutical industry has been far from enthusiastic about the right-to-try laws.

"We have serious concerns with any approach to make investigational medicines available that seeks to bypass the oversight of the Food and Drug Administration and clinical trial process, which is not in the best interest of patients and public health,” said Sascha Haverfield, vice president of scientific and regulatory affairs for the Pharmaceutical Research and Manufacturers of America. He suggested that medical providers, the pharmaceutical industry and FDA should seek ways to improve access to clinical trials.

Critics of the new laws contend that Phase One trials are too limited to assure that a drug can be safely used. “Safety (in Phase One) is tested in only the crudest way you can imagine, making sure it doesn’t kill people,” said David Gorski, an associate professor of surgery at Wayne State University and the editor of the Science-Based Medicine blog, which has been critical of right-to-try laws. Even for terminally ill patients, Gorski argues, the risks are too great based solely on Phase One trials.

“They say it couldn’t get any worse.” Gorski said. “Well, yes, it can get worse. If there’s anything worse than dying of a terminal disease, it’s added suffering and potentially cutting the time you have left.”

According to a January article in the journal Nature Biotechnology, only 16 percent of investigational drugs that complete Phase One clinical trials ultimately gain FDA approval.

Still, patients and families say they feel that they should be free to take the chance given that the alternative is death. “I should be able to take the risk of whether or not it would help,” said Austin Leclaire. “It’s my life.”