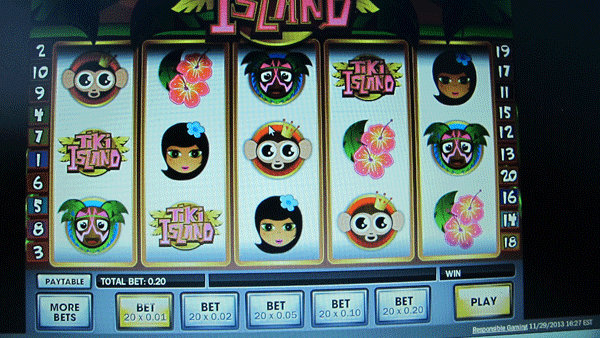 A computer screen in Atlantic City, New Jersey, shows a losing game of slots on the website of the Tropicana Casino and Resort. New Jersey started offering Internet gambling last November and has been disappointed in revenues to date.

State lawmakers who dream of dollar signs from legalized online gambling might want to pause for a moment to consider Delaware, Nevada and New Jersey.

Last year, the three states became the first in the country to legalize Internet gaming. But as New Jersey Treasurer Andrew Sidamon-Eristoff told state lawmakers earlier this year: “Clearly, the results so far have not met our expectations.”

By the end of May, one month shy of the fiscal year’s end, the state had taken in just $9.3 million in revenue from online gambling, according to the nonpartisan Office of Legislative Services. And with collections in April and May falling below those in March, online gambling isn’t even trending upward.  State officials have blamed the slow start on technology glitches and payment processing issues.

We just didn’t feel that it would be wise to put out a number. It was just too much unknown.Michael Lawton, a senior research analyst with the Nevada State Gaming Control Board

Nevada and Delaware, which have much smaller populations than New Jersey, also have collected only modest revenue from online gambling.

In Nevada, officials opted not to make revenue projections for the nascent industry – or to count on the money in its budget. The state, which legalized only interactive poker, generated about $700,000 in tax revenue from about $10.2 million in gaming wins from May 2013 through April of this year, according to Michael Lawton, a senior research analyst with the Nevada State Gaming Control Board.

“We just didn’t feel that it would be wise to put out a number,” Lawton said. “It was just too much unknown.”

In March, Morgan Stanley chopped its market projection for the U.S. online gaming industry by 30 percent, from $5 billion to $3.5 billion by 2017, “to better reflect the insights we have gained following the first few months of operations” in Delaware, Nevada and New Jersey.

From Illegal to Legal

Experts said it’s natural that legal Internet gaming would take some time to develop. “This is an industry that requires consumer education,” said Chris Grove, editor of the Online Poker Report. “It exists in a weird gray area because it was perceived to be illegal for so long.” In Nevada, where only casinos are permitted to operate online gambling web sites, the casinos take a cut from the winnings and then pay the state a percentage of their take.

New Jersey’s revenue estimates were unrealistic from the start, Grove said, because they relied on the most optimistic projections and counted on 12 months’ worth of revenue even though online gambling did not go live until late November, nearly halfway into the fiscal year. Grove said the state’s initial revenue estimates for online gambling were “driven far more by political need and budgetary magic math than by sober, rational analysis of the market.”

Still, Sidamon-Eristoff told lawmakers he remains “bullish over the medium and long term.” Despite lingering challenges in online gaming, he said, “We have seen enormous and growing interest in this form of gaming.”

The U.S. Justice Department opened the door for states to legalize online gambling when it ruled in 2011 that the federal Interstate Wire Act of 1961 applied only to sports betting, reversing course on its previous interpretation banning all internet gambling.

In February, Democratic Gov. Jack Markell of Delaware and Republican Gov. Brian Sandoval of Nevada signed an agreement that will allow people in each state to play online poker with one another, the first agreement of its kind in the country.

Also this year, Colorado enacted a law prohibiting the sale of lottery tickets online; in Florida, a bill to allow online lottery sales died in committee; Minnesota lawmakers introduced competing legislation to permit and prohibit lottery games on the Internet—all of which failed. Washington reintroduced a bill to reduce the penalties for online gambling.

We have seen enormous and growing interest in this form of gaming.New Jersey Treasurer Andrew Sidamon-Eristoff

But the future of legalized online gaming is far from certain. In March, U.S. Sen. Lindsey Graham, R-S.C., and Rep. Jason Chaffetz, R-Utah, introduced a bill that would ban most online gambling, which has gained bipartisan support. Supporters include Texas Gov. Rick Perry and South Carolina Gov. Nikki Haley, both Republicans, along with 15 state attorneys general.

Pushing the bill is Sheldon Adelson, the chief executive officer of Las Vegas Sands Corp. and a major Republican donor, who has launched a campaign to stop the legalization of online gambling, arguing that it “takes gambling too far.”

Sandoval has spoken critically of the bill, saying it would infringe upon states’ rights and undermine existing state law.

“Gaming regulation is the responsibility of state government,” Sandoval said in a statement. “Nevada has performed this function for decades and maintains an experienced, sophisticated and respected regulatory structure.”

Markell also opposes the bill, saying that Internet gaming has traditionally been regulated by the states and that there is no reason for the federal government to interfere with the state lotteries and other gaming that states now authorize and regulate.

Some advocates warn that gambling of any kind comes with costs as well as revenues.

“Internet gambling is not a panacea,” said Keith Whyte, executive director of the National Council on Problem Gambling. “Like all legalized gambling, it has both benefits and costs. Those social costs are real and they directly impact the state’s bottom line,” in areas such as criminal justice and health care, he said.

Whyte’s organization calls for states that decide to legalize gambling to take steps to protect consumers, such as requiring gamblers to set loss limits in advance and require better information for consumers about how the games work.

A number of issues have stymied the legal online gambling market.

New Jersey officials have cited problems with geolocation technology, which determines whether a prospective online gambler is indeed within state borders, in accordance with state laws. Payment processing has been another common issue.  Some potential gamblers have run into roadblocks when banks that issue credit cards have blocked attempts to gamble online, in some cases because they did not yet know that gambling was legal. Some credit card companies have declined to participate altogether.

A research report released by Morgan Stanley in March estimated that about 60 percent of online gaming transactions in New Jersey were rejected and that about half of those users did not make other attempts to fund their accounts.

Israel Posner, executive director of the Levenson Institute of Gaming, Hospitality and Tourism at Stockton College of New Jersey, said there has been a learning curve for all involved. Gaming providers, for example, are still learning how to provide games that will be interesting to customers using mobile devices, which may be different from those that work well in live casinos. And online poker requires “a critical mass of people who are interested in playing the game you want to play at the stakes that you want to lay at the time that you want to play,” Posner said.