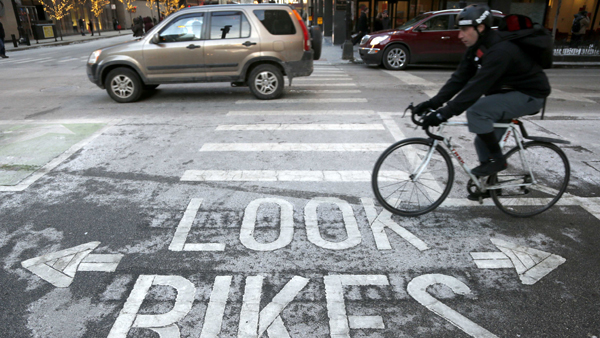 A lone cyclist navigates between street traffic and pedestrians in a special bike lane in Chicago's famed Loop. Chicago Mayor Rahm Emanuel and other city and state leaders have made bike lanes and bike programs a signature issue, believing it will help them attract bright young people and innovative companies.

If a 90-minute commute from Brooklyn to New Jersey sounds grueling in a car, just imagine it on a bicycle.

Until a recent job change, 40-year-old Peter Schneider made that daily trip, biking 22 miles from his home in Brooklyn to his marketing job in Englewood Cliffs, New Jersey—and he loved it. “Commuting and exercising at the same time kills two birds with one stone,” he said.

Cycling to work wouldn’t have been possible, Schneider said, without the protected bike lanes of the Manhattan Waterfront Greenway, a 32-mile route that circumnavigates the island of Manhattan.

Communities across the country are weighing similar routes, believing that a cycling-friendly reputation will help them attract millennials and the creative and economic energy that comes with them.

“States and cities are competing for the most mobile generation ever and so the job creators and the innovators are really pushing for these amenities,” said Bill Nesper, who heads the “Bicycle Friendly America” program at the League of American Bicyclists. “Baby boomers want to live near millennial children and their grandchildren, so we’re really seeing Washington and most major cities seeing this as a way to attract and keep talented people.”

In contrast, Alabama, Arkansas, Mississippi, Tennessee and West Virginia all have bike commuting rates of less than 0.2 percent.

Nationwide, less than 1 percent of workers commute by bike. Bike commuters are mostly 16-44 years old, and male cyclists outnumber women by almost 3-1, according to the Stateline analysis.

But the rates are significantly higher in cities such as Washington, D.C (4.1 percent of all commutes) and Brooklyn (1.5 percent), where residential areas are close to workplaces.  People between the ages of 16 and 34, a significant portion of the population in those cities, have shown the greatest interest in alternatives to cars, driving 23 percent less on average than they did at the turn of the century, according to a study published last year.

Though its bike commuter percentage is lower than that of some other states, Washington State has topped the list of bike-friendly states compiled by The League of American Bicyclists for seven years in a row. It gets especially high marks for educating and encouraging cyclists. Much of the credit for that ranking goes to Seattle, which has a bike commuting rate of 4.1 percent. The city is known for its innovative pavement markings and plans to put protected lanes near every home.

Davis, California, is another standout. The self-proclaimed “Bicycle Capital of America,” which is home to the U.S. Cycling Hall of Fame, has a bike commuting rate of nearly 20 percent, including 14 percent of female commuters.

Among large cities, Portland, Oregon, has spurred tremendous growth in bike commuting with its aggressive program of protected lanes and other bike-friendly programs, like bicycle –sensitive traffic signals. Lately the city has embarked on a system of “greenway” streets where stop signs are minimized and there are speed bumps to calm traffic.

Between 1990 and 2009, the percentage of Portland commuters traveling by bike increased from 1 percent to 5.8 percent, more than any other large city, according a 2011 study of U.S. and Canadian cities by John Pucher at Rutgers University.The popularity of biking in Portland has even spawned a colorful cyclist character named Spyke on the television comedy “Portlandia.” Spyke pedals the streets proclaiming, “Bicycle rights!”

“Portland’s comprehensive package of cycling policies has succeeded in raising cycling levels six-fold and provides an example that other North American cities can follow,”  according to Pucher.

The biggest single reason for a low ranking, Nesper said, is a lack of bike “infrastructure,” including dedicated bike lanes, signs and protective barriers.

“In order to be a really great, high-performing bike-friendly community like Portland, Seattle or Minneapolis, you have to make bicycle trips easier but you also need to give bicyclists a place to ride that is their own. That’s what’s going to attract those people who are still on the sidelines,” he said.

The Bicycle Friendly America program rewards states and cities with higher rankings for  innovations such as bike repair kiosks, greenways like the ones in New York and Portland, public bike sharing programs, (which now exist in17 cities), and Open Streets events that shut down traffic temporarily for cyclists and pedestrians.

Nesper also cited the need for “vulnerable users” protection laws, like one in Delaware, that stiffen penalties for careless driving that injures cyclists or pedestrians. States with large cities can consult the Urban Street Design Guide, already endorsed by six states, for guidance on incorporating bike lanes and other bike-friendly features.

There is inherent danger in riding a bicycle, especially near cars. But nationwide, there has been a 31 percent decline in serious injuries over the last 20 years, even as the number of trips has soared. Fatalities for bike commuters fell from 21 per 10,000 trips in 1980 to nine in 2008.

Advocates and experts say that increasing safety with protected lanes is the key to getting people to accept bicycle commuting as safe and feasible.

“It’s definitely a determining factor in deciding whether to ride,” said Diego Bernardini, a physician who uses lanes protected by posts when he commutes from his home in Washington. He notes that his native Buenos Aires, Argentina has bicycle lanes physically separated from traffic with curbs, for even greater safety.

Women Riders as a Bellwether

In the recent book City Cycling, transportation experts Jan Garrard of Deakin University, Susan Handy of the University of California at Davis, and Jennifer Dill of Portland State University assert that women are “a bellwether of biking safety.”

Stephanie Weir, an organizer at St. Paul Women on Bikes in Minnesota, isn’t sure why more women haven’t joined her in commuting to work, but she’s familiar with two popular theories: that women are more risk-averse, and that they tend to be saddled with chores like child pick-up and grocery shopping, that require a car.

“I’m not really risk-averse so I can’t speak to that,” Weir said. “But I did only ride off-street for a long time and then I started easing into riding in traffic. I saw I had a bike lane to take to work, that it was all connected, and that made it easier.”

Women do tend to start riding when they see that it’s safe and feasible, according to Handy of the University of California, Davis. But they tend to be less enthusiastic than men for deep-seated cultural reasons.

“By investing in bicycle infrastructure and adopting policies and programs to promote bicycling, communities can ensure that women with the will to bicycle have a way to do it,” Handy wrote in her own study presented this year in Paris. “But our Davis research also points to the importance of increasing the will of women to bicycle by addressing the comfort, convenience, and liking of bicycling, and doing so from an early age.”

But the push to claim scarce street space for cycling lanes has been met with resentment in some areas. Frank Buckley, a law professor, saw parking spaces on his street in Alexandria, Virginia, turned into bicycle lanes over his neighbors’ objections.

Parking issues often put a damper on cycling improvements, especially when there are minimum parking space laws that stand in the way of conversion to bike lanes. To counter concerns about traffic and parking, some areas have experimented with “floating” lanes that could be used for parking, bike lanes or cars depending on the time of day, as outlined in a San Francisco study.

Generally anti-bike lane sentiment has been localized and informal, but some plans have been postponed or dropped because of opposition. Last year, plans for a study of bike lanes on Westwood Boulevard in Los Angeles were dropped after opposition by local homeowners.

New York City has removed some bike lanes in Brooklyn and Staten Island after protests, and the city still faces a lawsuit by two groups of Brooklyn residents over lanes at Prospect Park West.

“What should be a balancing of community interests has turned into something of an ideological battle,” said Buckley.