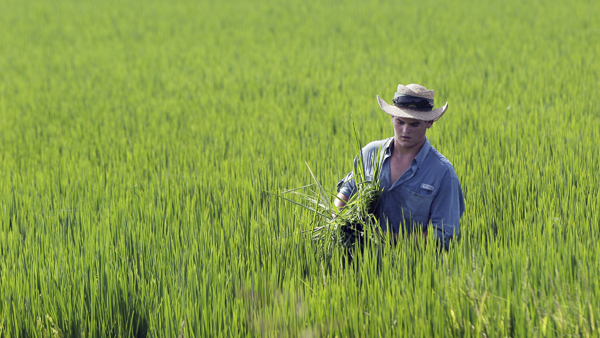 Farmer Ben Burgess carries rice in a field near Coy, Arkansas. Arkansas farmers and many others across the country will benefit from a slew of state tax cuts set to kick in July 1. (AP)

Indiana and Rhode Island businesses will see a drop in their corporate tax rates on July 1. In Idaho, people and businesses purchasing software through the “cloud” will be spared sales taxes. And starting tomorrow, Maryland is beefing up tax credits related to cybersecurity, biotechnology and research and development to encourage companies to relocate to the state.

July 1 is the start of most states’ fiscal years, and for the first time in years, governors and legislators are cutting some taxes, taking advantage of an improved revenue outlook and banking on the financial breaks to encourage business and job growth in their states. While a few fees and certain sales taxes will go up, the general trend has been to use corporate tax cuts to get the economy churning, said Brian Sigritz, director of state fiscal studies at the National Association of State Budget Officers.

The tax code is one of the few things businesses care about when they're looking for new places to invest.Scott Drenkard, an economist at the Tax Foundation

“In 2010, we really saw a lot of tax and fee increases to bring revenues into cash-strapped state coffers,” Sigritz said. “This year was the first year (since then) governors actually proposed tax and fee decreases. We’ve definitely seen a movement to try to reduce taxes and fees and encourage job growth.”

While budgets have been tight, the time is right to give businesses a break so they can hire people, said Raymond E. Gallison, Jr., chair of the Rhode Island House Committee on Finance. “The economy’s only going to get better if we have businesses creating jobs. One of the biggest problems they’ve had is access to capital,” Gallison said, and the tax relief will free up the cash.

Consumers are getting a bit of a break in some states as well.

In Connecticut, nonprescription drugs will be free from sales taxes, while in Florida, youth bicycle helmets, child restraint systems and booster seats will be tax exempt. California drivers get a 3.5-cent decrease in the gasoline tax. Rhode Islanders will be spared a controversial 10-cent toll on the Sakonett Rover Bridge (although a future, scheduled increase in the gas tax will be levied to pay for upkeep on the structure). And local farmers in Arkansas will see a drop in certain sales taxes associated with agriculture and energy used by farmers.

In other states, sales taxes and fees will go up: North Carolinians will pay a higher sales tax for electricity and a new tax on natural gas, while New Hampshire drivers will pay 4.2 cents more per gallon of gas to fund highway improvements.

“The tax code is one of the few things businesses care about when they’re looking for new places to invest,” said Scott Drenkard, an economist at the Tax Foundation, a Washington-based research group. “I do think people recognize you can be more competitive as a state (through) the tax code.”

Critics say business tax cuts do little to stimulate the state economies or lure companies from other states. “There’s always this cycle, when revenues start coming back a little bit, you start to see legislatures using some of the revenue to cut taxes. And it’s unfortunate, because revenues are just finally back to where they were, pre-recession, after adjusting for inflation,” said Michael Mazerov of the Center for Budget and Policy Priorities, a research group focused on low-income families.

Just two percent of the job losses during the recession occurred because businesses moved to another state or country, Mazerov said. “What accounts for how well states do … is stimulating the birth of new business,” he added.

Most states have no way of knowing if a tax break had a direct impact on business retention or hiring, said Joshua Smith, senior policy analyst at the Economic Policy Institute, a Washington think tank focused on low-paid workers.   But “it’s a zero-sum game, anyway,” since one state’s gain is another’s loss, he added. Smith said states would be better off using the revenues to fund infrastructure building and repair to create jobs.

The economy's only going to get better if we have businesses creating jobs.Raymond E. Gallison, Jr., chair of the Rhode Island House Committee on Finance

“It’s not surprising; states are doing a little bit better” and can afford to ease the tax burden, said Lucy Dadayan, senior policy analyst at the Nelson A. Rockefeller Institute of Government in Albany, New York. “It’s also an election year for a lot of states, so there might be gimmicks for cutting taxes and making it sound better than they actually are,” she noted.

Massachusetts Democratic Gov. Deval Patrick last week signed a bill raising the state’s minimum wage from $8 to $11 per hour by 2017, which would make it the highest of any state.

California’s minimum wage will increase by $1 to $9 an hour on July 1, while in the District of Columbia, the rate goes from $8.25 to $9.50 an hour, above the national minimum of $7.25 an hour. Rhode Island’s fiscal year 2015 budget bars localities from raising the minimum wage on their own (Providence hotel workers were pushing for a $15-an-hour standard), but the state is set to raise the minimum wage next year to $9 hourly.

Massachusetts also made a significant hike to its minimum wage, but it won’t take effect until January 2015. Democratic Gov. Deval Patrick last week signed a bill raising the wage from $8 to $11 per hour by 2017, which would make it the highest of any state.

Beginning July 1, the Mississippi Religious Freedom Restoration Act will allow individuals or organizations to sue the government over laws they feel interfere with their practice of religion. Gay and lesbian rights groups fear the law may permit discrimination against them.

In California, meanwhile, transgendered people will have an easier time changing their names, eliminating the requirement that people announce the name change in the newspaper before seeking a court order for it. And in Delaware, all civil unions that have not been dissolved or are in the process of being dissolved will automatically convert to marriages.

Illinois will allow residents to register to vote online. And starting July 1, Illinois kids who will turn six on or before Sept. 1 must be enrolled in school in the state.

In Mississippi, a new law will define “crimes of violence,” a designation that will affect eligibility for parole, and will require DNA testing in certain crimes. An overhaul of criminal law in Indiana includes a broader definition of burglary, applying to the act of breaking into a building with the intent to commit theft, as opposed to a felony.

A Georgia law taking effect July 1 takes aim at the Affordable Care Act by banning the state from using any of its funds to expand Medicaid or to set up a state insurance exchange. Georgians may use the federal health insurance exchange, however.

In Colorado, people will be free to apply for a license to open a retail marijuana operation. In Washington state – which, like Colorado, has legalized recreational marijuana use – the state’s inaugural retail marijuana shop is set to open in Spokane. In Iowa, it will be legal for people with intractable epilepsy and their caregivers to use and possess cannabidiol, a pill form of marijuana. The substance will not be available legally in-state and must be acquired elsewhere.

Both Georgia and Idaho will expand the legal use of guns on July 1, with Idaho barring colleges from preventing students from bringing guns and ammunition to campus. In Georgia, licensed gun owners will be able to bring firearms into bars, schools and churches. In Tennessee, there is no longer a ban on residents carrying switchblades and knives longer than four inches “with intent to go armed.”

Traveling by road or water? Georgia is now requiring boat operators born on or after Jan. 1, 1998 to complete a boater education course. In Nevada, moped owners must register their vehicles. And in Virginia, people will be allowed to put intellectual disabilities or autism disorders on their driver’s licenses.