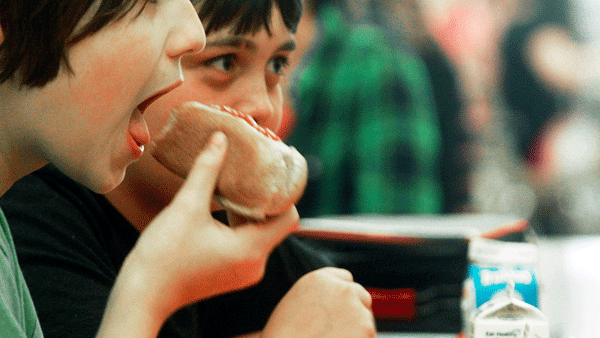 Students eat lunch at Barre Town Elementary School in Vermont.  Vermont schools expanded a program that ensures that students who had been eligible for reduced-priced meals will eat free.

Thousands more students could be eating school lunch completely free starting next fall, thanks to a four-year-old federal program that is finally expanding to all 50 states.

The expansion comes through the so-called Community Eligibility Provision, passed by Congress and signed into law by President Barack Obama in 2010 as part of a broader school nutrition measure. It opened the door for districts with free or reduced-price lunches to offer the meals to every student at the school, at no cost to them — no application necessary and regardless of household income.

The program has seen a slow state-by-state rollout since 2010. Certain schools in three states (Illinois, Kentucky and Michigan) were eligible first, based on need and their data-sharing capabilities. Last year, 4,000 more schools in 11 states participated. But all states will be covered starting this school year. Now the question facing district officials in newly eligible states is whether it makes financial — and political — sense to participate.

Originally, districts had until the end of June to decide, but the federal government extended the deadline into August to give districts more time, especially after some delays in publishing the list of schools or districts eligible.

There’s no real-time tracking of how many new districts will participate this year, but state and local education officials are weighing it. In most states, hundreds of schools are eligible, according to the U.S. Department of Agriculture and an analysis from the left-leaning Center on Budget and Policy Priorities.

In areas where the program has been implemented, it’s been lauded by state and district officials, teachers and child nutrition advocates as a boon for the low-income school lunch program, which provided 21.5 million free or reduced-price meals in schools last year. That’s more than 70 percent of all meals served through the National School Lunch Program.

“Everyone’s got a great meal that they can get at no charge. It just becomes the standard; it really unites the campus,” said Madeleine Levin of the Food Research and Action Center. “We’re wrapping our arms around these [schools] that need support just like we do in other educational programs.”

Under the community eligibility provision, the federal government pays for only a share of the expansion, leaving states to pay the balance. As a result, not all school districts are expected to participate.

Schools where 40 percent or more of the students automatically qualify for the school lunch program, because their families are already receiving food stamps, for example, are eligible to use community eligibility. There are more than 28,000 such schools nationwide.

In schools where nearly all students are already receiving free lunch, there will be little change in federal funding. That’s because the school is already being reimbursed for nearly all lunches served at the higher free-lunch federal rate – which can top $3 per meal – rather than the lower rate, which can be well below $1 per lunch.

But if eligibility is closer to the 40 percent threshold, the school will have to make up the difference for a portion of the meals.

In Fort Wayne, Indiana, for example, officials will offer the expanded lunch program at all elementary and middle schools starting this fall. But high schools there, where lunch program participation tends to be lower, will have to wait, since officials weren’t sure including them would make financial sense.

The district had some elementary and middle schools that already had 95 percent or more of their students covered by the free-lunch program, said Krista Stockman, a spokeswoman for the district. At that point, she said, “It really becomes easier to give everyone the free meals.”

“It starts to become more of a hassle to have to deal with some students who are paying,” she added. “Overall, it just makes a much smoother process for our schools, our students and for our families.”

High schools have always been more difficult when it comes to the free and reduced-price lunch program. There’s more of a stigma about participating, officials and experts say. In some cases, families’ financial situations might improve as children grow and parents are freer to work, without paying the high cost of child care. That can reduce the number of students eligible for the program.

Apart from the high school question, though, other districts have taken a timid approach. Indiana’s East Allen County Schools, which is near Fort Wayne, opted not to participate because officials wanted to wait and see the effects in neighboring districts, district spokesperson Tamyra Kelly said.

In Chicago, officials have moved slowly: They started with 215 schools, expanded to 465, and will cover all 658 schools starting next school year.

To make the broader expansion work, Leslie Fowler, executive director of nutrition support services for Chicago schools, said they had to make sure enough students would qualify under existing criteria. Reaching their set level of enrollment under previous free lunch criteria— 62.5 percent of all students district-wide — ensured the difference in reimbursement rates from Washington didn’t cost the district revenue.

“It doesn't make sense to do district-wide if you don't get to that threshold because at that point you’re probably losing revenue,” she said.

St. Paul, Minnesota is another district that is moving slowly. Jean Ronnei, the chief operations officer, said the district is doing a “test drive,” implementing the program at one high school, one middle school and a few elementary schools.

“Not going full swoop will give us a chance to see more about what the impact will be,” she said. She said some unrelated funds, like per-student aid from the state based on free-lunch enrollment levels, are tied to paperwork that could be more difficult to collect if no application is necessary for the free lunch program.

‘The Only Meal They Get’

There are areas where those questions have already been answered. “We love it,” said Keri Kennedy of the Office of Child Nutrition in West Virginia, which has been participating since 2012. “We are thrilled that it’s an option for our schools.”

West Virginia is held out as a success story for the Community Eligibility Provision. Over half of its schools are participating. More than 110,000 students are enrolled, about 40 percent of all students in the state.

West Virginia schools were determined to make the finances of the program work even in districts and schools that are closer to the threshold of eligibility — the same issue that stopped others from expanding at all.

By grouping schools together for budgeting purposes, Kennedy said, one with higher rates of participation in free or reduced lunches can make up for lower rates at another. In the end, she said, the finances balance out.

“Our county superintendents really made the decision to pull in as many schools as they possibly could,” she said. “We’re a really needy state, so it’s really hard to argue with the fact that for some of our kids, this might be the only meal they get.”

But the financial considerations of the program are just one part of the calculus. In some cases, the idea of expanding a safety-net program to all students — regardless of their financial situation — struck some as irresponsible. Even school officials who support the program admitted that it hit the wrong chord with some.

“There is a certain percent of people who feel this is an overreach and the federal government shouldn't be paying for all these kids to be eating and that parents need to be responsible,” said Fort Wayne’s Stockman.

Added Chicago’s Fowler: “I’m sure there’s a segment of the population that will say this is not a good way to spend taxpayer money.”

The ultimate cost to the federal government is a question mark hanging over the program. The Congressional Budget Office estimated in 2010 that more than 2,200 schools would participate by the end of the decade, at a cost of more than $100 million. CBO estimates the entire National School Lunch Program will cost $11.9 billion next fiscal year.

The actual enrollment of the new program has already nearly doubled the 2010 estimate. But the budget fallout is still unclear: In many cases, Washington might not end up paying for that many more free meals than it would otherwise, especially in districts that already had 80 percent or 90 percent of students receiving free or reduced-price lunches.

Still, the program stirred some political blowback locally and in Washington as well. There were scattered reports of school districts hearing testimony from taxpayers against the provision as school boards considered it. And in 2010, it got 153 Republican and four Democratic “no” votes in the U.S. House. It passed by unanimous consent in the Senate.

The potential for ballooning costs could bring more scrutiny to the program in the future, as spending in general — and on the safety net in particular — comes under more scrutiny. A program that’s not based on the need of those it benefits, said Rachel Sheffield of the conservative Heritage Foundation, could be tougher to defend.

“This would just be using money in a way that is not necessarily the most prudent,” she said. “It’s one thing to provide school meals to children who come from low-income homes. It’s another thing to just completely expand a program that’s intended for low-income homes.”