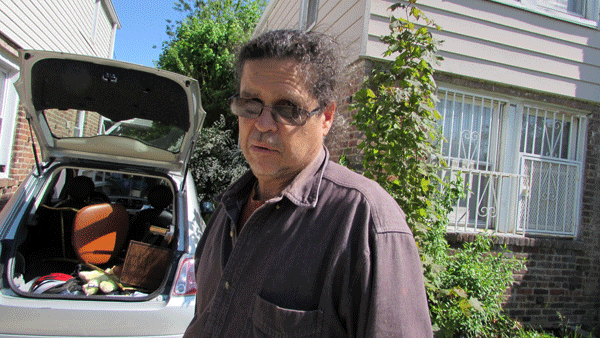 Retired letter carrier Steven Ramos packs up his modest house in Queens, New York, to move to central Florida where he estimates his living costs will drop by 80 percent. Florida, a perennial favorite for retirees, has seen retirement moves double since the recession ended.

Steven Ramos, a retired letter carrier, estimated his cost of living would drop 80 percent when he moved from New York to a rental community in central Florida.

“The increases are insane,” Ramos said. “In the wintertime, we’re pushing $400 to $500 a month to keep the house warm.” So off to Nalcrest, Florida.

Retirement moves, which dropped sharply during the worst of the recession, are making a comeback.

Florida, the top draw for movers 55 and older, is gaining about 55,000 older movers each year, more than twice the growth it saw after the housing bubble burst in the middle of the last decade, according to a Stateline analysis of Census Bureau numbers. Florida’s annual growth for this age group is 138 percent.

Arizona has seen an 18 percent increase in retiree moves and South Carolina 6 percent, as an average of annual moves in the post-recession years of 2009-2012 compared to 2006-2009.

The 55 and older category is often used by researchers because people tend to be thinking of retirement when they make long-distance moves at that age, though they could still be moving for job transfers or other reasons.

Low cost of living and warm weather are prime draws for retirees. They tend to move from colder or high cost states such as New York, Illinois, New Jersey, Michigan and California, in search of warmer and lower cost states including Florida, Arizona, North and South Carolina and Texas. Many of the destination states also have relatively low property taxes – for instance, South Carolina’s median annual property tax bill is just $769, compared to more than $7,000 in New Jersey.

Ramos and his wife, like many, put off a move because of the recession. “The bank gave us a hard time. We should have been out of here a long time ago,” Ramos said.

The top five most popular cities for seniors have all seen increases since the recession ended in 2009, according to a study by William Frey, a demographer at the Brookings Institution. They are the metropolitan areas around Phoenix; Riverside, California; Tampa-St. Petersburg, Florida; Atlanta; and Denver.

“An emerging senior boom is boosting not only traditional retirement destinations but also emerging ones in the Southeast, Mountain West and Texas,” Frey wrote. “Florida and Arizona are coming back even bigger in the post-recession period, with some falloff for Texas.”

Some of those booming markets require caution.

Because of speculative price increases, “the markets there have gotten more challenging for the people who really want to live there,” said Chris Porter, chief demographer at Burns.John Burns Real Estate Consulting, a prominent housing market analysis firm, notes a buying boom around the country by older Americans whose stock portfolios recovered from the 2008 crash. But the group is wary about “hockey-stick markets” like Phoenix , Las Vegas, Riverside and Tampa where prices fell drastically and “came back too far and too fast” when investors scooped up properties. (Picture the business end of a hockey stick.)

Recreation for today’s younger and healthier retirees is a big consideration – from the mountaineering and four-wheeling popular in the West to the bicycling, motorcycling and farming enjoyed by Kathy Merlino and her husband in South Carolina.

“We moved from Michigan—high taxes, hard winters and high unemployment,” said Merlino, who now blogs on retirement after a career in banking and real estate.

“I saw people moving here from Florida in droves. I called it ‘the Florida Trail’ as people had retired from the north to Florida, which was the tradition, only to find they disliked the extreme heat,” she said.

North Carolina has also become a destination for so-called “half-backers” who moved halfway back to their Northeast origins, said Rebecca Tippett, director of Carolina Demography at the University of North Carolina.

“We have mountains and we have coasts and we have seasons,” said Tippett. “The balance of amenities that the state offers with the cost of living is really nice.”

Florida, however, remains by far the destination of choice. A recent study by the University of Florida’s Bureau of Economic and Business Research found the state’s economy is becoming more dependent on tourism and retirees as agricultural lands are increasingly plowed under for housing. Service jobs for retirees have created a lower-skill job structure, the study suggests.

“It is difficult for retirees to move to Florida when they can’t sell their houses up north, and stricter mortgage lending rules must have played a role as well,” said Rayer. “Another factor behind the recent uptick in migration may have to do with the stock market recovery, which has improved the net worth of many individuals.”

Rodney Harrell, who studies so-called liveable communities for AARP, said many of the top destinations for older Americans, as noted by Frey of Brookings, are the same as those for younger people. Denver, Riverside, Austin,Portland, Oregon and others rank high with both age groups.

“They’re all seeking some of the same elements, like a walkable community and a booming economy, as well as being close to family members” said Harrell, who also pointed out that the vast majority of retirees do not move at all.

An important consideration, whether moving or not, is to have a home that will not become burdensome later in life when mobility is reduced, Harrell said, noting a push to implement policies like one in Pima County, Arizonathat requires new homes to have stair-free entrances and other amenities for the physically challenged.

“People in general are very poor at planning for yet-unknown circumstances,” said Harrell. “If I’m 75 and healthy I’m not necessarily going to plan a community where I can walk everywhere if I can still drive.”

With that in mind AARP has embarked on a project to gauge communities for long-term livability and plans to rate areas on attributes like walkability and disabled access, and to establish a standard for “age-friendly communities.”

New York state may have the largest loss of older movers, about 29,000 per year, but that’s a tiny fraction of the million senior citizens in New York City alone, a number projected to grow 30 percent by 2030, according to Joe Salvo, population director for the city’s planning department.

“This increase is attributable to a number of reasons: walkable neighborhoods with easy access to stores, parks, and entertainment as well as transit, existing social networks and nearby family, strong social and community services, and the list goes on,” said Salvo.

Frey’s study indicates that moves by older Americans have rebounded faster than those of younger millennials. The stock market recovery is uniformly cited as a factor.

A recent Associated Press poll found that half of older workers have delayed retirement plans because of the economy.

Merlino, the South Carolina retirement blogger, said there were worrisome times during the recession when the real estate market slowed and the value of stocks fell.

“Despite the recession, we had stayed in the stock market,” Merlino said.  “We recouped nicely and went on with our plans.”