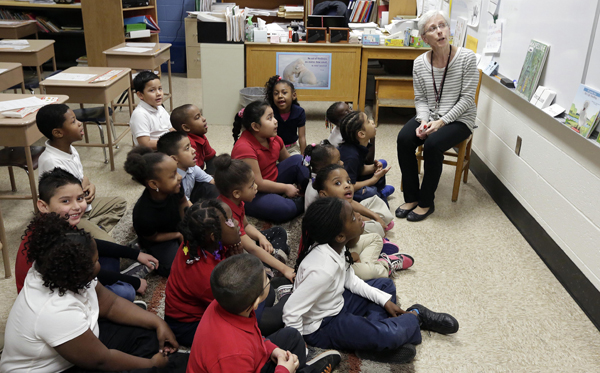 Mary Natali teaches her first grade class at George Buck Elementary School in Indianapolis. Indiana was the first state in the country to revoke the Common Core math and English standards, leaving teachers reeling from years of change.

Stephen Colbert mocked it. Comedian Louis C.K. called it a “massive stress ball that hangs over the whole school.” And lawmakers in state capitols spent countless hours over the past few months debating it.

Their target is the Common Core, a set of math and English language arts standards voluntarily adopted beginning four years ago by all but a handful of states. The standards define what students should know and be able to do by the end of each grade.

Forty-five states and the District of Columbia initially signed onto the standards in both math and language arts (Minnesota adopted only the language arts standards), hoping to better prepare students for college and careers by the time they graduate from high school. Supporters say the Common Core encourages critical thinking and analytical skills, rather than rote memorization.

But in the past year, criticism over the Common Core has ramped up in state legislatures, school board meetings and classrooms. Critics from both the right and the left, including a very vocal tea party contingent, want to throw out the standards.

As of May 15, lawmakers introduced over 340 bills in 46 states—every state that had had a regular legislative session this year— that addressed college- and career-readiness education standards, including the Common Core.

At the same time, implementation of the standards is well underway in most of the states that originally signed on.  Despite widespread debate, only a handful of states have officially backed away from the Common Core, with a few others on the fence.

Criticism has come from the left and right.  Opponents argue that the federal government is forcing Common Core on states. (Although the standards were a state-led effort, the Obama administration has given states incentives to adopt the Common Core through the competitive Race to the Top grant program and No Child Left Behind.) Some argue the standards aren’t academically demanding enough. Others say the implementation has been sloppy, with confusing or subpar curricular materials and inconsistent teacher training.

About a half dozen governors have weighed in since last year with executive orders on the issue, generally reasserting the rights of states to determine their own education standards. In March, Democratic Connecticut Gov. Dannell Malloy signed an executive order creating a task force to study and make recommendations on the implementation of the Common Core.

State lawmakers also spent a lot of time discussing related legislation sparked by the standards. Bills inspired by the Common Core touched on student data privacy, how to assess student learning, professional development for teachers, and how, in the future, states should decide on education standards.

The Common Core “really dominated the conversation, mood and the ability of the legislatures to discuss other issues,” said Michelle Exstrom, who focuses on education policy for the National Conference of State Legislatures.

Chris Minnich, executive director of the Council of Chief State School Officers, one of the groups that spearheaded the Common Core, noted that despite all the debate, the vast majority of states have decided to stick with the Common Core, which he sees as a reaffirmation of the standards.

“The debates have happened in a lot of these places and they have decided that Common Core standards are strong standards,” Minnich said. “I think this closes the door on some of that conversation.”

But Common Core critics like Emmett McGroarty, education director at American Principles Project, a conservative nonprofit that has helped to push grassroots efforts to end the Common Core in numerous states, say momentum is on their side.  These efforts are growing quickly in several states, including Alabama, Florida, Georgia, Idaho, Mississippi,  South Dakota and Utah.

“I think this movement is going to explode,” he said. “We’re entering a new era of the activist mom who’s really going to be directing government as the founders intended.”

Most of the states that signed on to Common Core joined one of two main consortia set up to design new student assessments. But these groups are also starting to splinter, with every week bringing news of yet another state venturing off to create its own assessments.

The assessment groups received $438 million in economic stimulus funding and were considered one of the key benefits of the common standards, allowing states to save money while creating better student assessments.

Same Standards by Any Other Name?

Indiana, one of the first states to adopt the Common Core, became the first to drop the standards when Republican Gov. Mike Pence signed legislation in March. The move followed a vote by the Republican-controlled state legislature in 2013 to pause implementation.

“I believe our students are best served when decisions about education are made at the state and local level,” Pence said. Some Common Core opponents, however, complain that Indiana’s new standards, adopted by the state in April, are essentially the same standards with a new name.

In South Carolina, Republican Gov. Nikki Haley signed a bill May 30 that will keep the Common Core in place for the 2014-15 school year, but require a review of the standards. Any new standards out of that review would be implemented by 2015-16. The law also requires that in the future, the General Assembly approve any education standards that are not developed by the state Department of Education.

Last Thursday, Republican Gov. Mary Fallin of Oklahoma signed legislation to repeal the Common Core and direct the state Board of Education to develop new standards by August 2016.

Fallin said the Common Core was created with good intentions in mind but became tainted by federal overreach. “We cannot ignore the widespread concern of citizens, parents, educators and legislators who have expressed fear that adopting Common Core gives up local control of Oklahoma’s public schools,” she said.

Oklahoma Rep. Mark McCullough, a co-sponsor of the bill to drop the Common Core, said lawmakers felt there was a lack of consensus on the standards. “Better to stop now and cause some disruption than to tie ourselves to something we’ll be sorry we tied ourselves to down the road,” McCullough, a Republican, said. “This was not a reactionary thing. This is something that took many many months of thoughtful consideration and examination before we decided to move in that direction.”

Last week, anti-Common Core legislation advanced in North Carolina’s General Assembly. Republican Gov. Pat McCrory has previously voiced support for the Common Core but has not said how he will respond to legislation to reverse course.

In Missouri, Democratic Gov. Jay Nixon has until July 14 to decide the fate of a bill from his Republican-controlled legislature that would create work groups to decide new education standards.

In March, the Wyoming state legislature, controlled by Republicans, adopted a similar provision in its state budget, in part over concerns about what the science standards say about global warming. And in Kentucky, Democratic Gov. Steve Beshear last fall ordered the state to adopt the science standards by executive order, after a legislative committee voted to reject the standards, which had previously been adopted by the state Board of Education.

The Common Core kicked off an unprecedented amount of controversy and legislation this year on student data privacy even though schools have been collecting and storing electronic “student data” such as attendance records and test scores for years. Some critics say the new standards would lead to the state or federal government improperly collecting, storing or selling student data.

The NCSL counted about 100 bills introduced in 33 states on student data privacy. More than a dozen were enacted. And in April, the nonprofit inBloom, which had planned to store and manage student data for schools across the country, announced it would close after parents and state lawmakers expressed concerns about student privacy.

In New Hampshire, legislation approved in May limits the kind of information that can be stored in the statewide student data system, prohibiting such information as student Social Security numbers, criminal records, records regarding sex behavior and attitudes.

And New York’s new budget provides for the creation of a Chief Privacy Officer position within the state education department to establish standards and privacy policies for education data to respond to concerns over implementation of the Common Core.