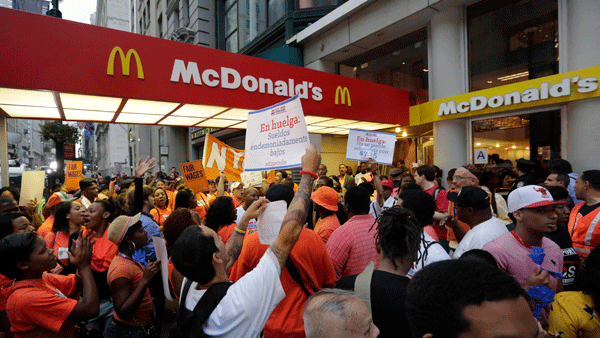 The two U.S. counties with the worst income inequality couldn’t be more different. No. 1 is Manhattan. The second is a rural Native American reservation in North Dakota.

The two illustrate how widely inequality is spread around the country, and how the issue presents itself in different ways. The far-reaching problem was a driving force behind a raft of proposals in the states this year, as lawmakers looked to address persistent wealth gaps exacerbated by the Great Recession and the subsequent years of halting economic growth.

Polls show inequality to be a growing public concern. A Pew Research Center survey this year found 65 percent of all Americans believed inequality was growing, and Gallup found similar results. Partisan differences abound: 90 percent of Democrats in the Pew poll thought there was “a lot” or “some” actions government could take about inequality. Half of Republicans said there was “not much” or “nothing” government could do.

Those differences carried over to the states, where responses in blue versus red states seemed at times as vast as research has shown the wealth gap itself to be. This year, lawmakers sought to do something about inequality, from giving tax breaks to individuals and businesses to bolstering safety net programs and clamping down on corporate pay.

“Our economic divide has become so stark, inequality is so off the historical wall, it’s almost forced itself on the country’s attention,” said Sam Pizzigati of the Institute for Policy Studies, a Washington-based progressive think tank. “It’s become so stark that it can’t be ignored anymore.”

Others worry the focus on inequality can lead to proposals – targeting executive pay, for example – that won’t directly help those who have less.

“Inequality has distracted attention from the bottom, where it needs to be,” said Alan Reynolds, a senior fellow at the libertarian Cato Institute who has questioned some of the research showing an increasing wealth gap. “Dealing with poverty is much harder.”

Inequality cuts across state lines and pervades every corner of the U.S. It also dovetails with a decline in economic mobility: A Pew Charitable Trusts report last year found 43 percent of Americans raised in the bottom of the income scale remain there as adults. Almost three in four never reach the middle. (Pew funds Stateline)

The areas with the worst inequality show how the problem presents different challenges in different places.

New York County, which comprises Manhattan, for example, had the worst income inequality of all U.S. counties, according to U.S. Census Bureau data showing the average inequality from 2008-2012. (see methodology below)

The second most unequal was Sioux County, North Dakota, within the Standing Rock Indian Reservation which straddles the Dakotas. President Barack Obama will visit the area on Friday.

Some patterns emerge from the inequality data:

Click here to see a Stateline data visualization of the Census data, which depicts income inequality by county.

This year Democrats in two coastal states floated a pair of novel proposals that sought to tie state power of the purse to inequality. Experts and the bill authors said it was the first time such measures had been introduced to address inequality.

In California, two Senate Democrats proposed tying the state’s corporate income tax to CEO-worker pay equity, setting up a sliding scale whereby a company’s tax bill would decrease if the gap between executive and worker pay was smaller.

The bill would have reduced the corporate tax rate for any company where the CEO makes less than 100 times the earnings of the median worker at the company (with bigger discounts for greater parity). Last year, a Bloomberg survey found the average CEO compensation to be more than 200 times that of rank-and-file workers, an increase of 20 percent since 2009.

The bill eventually failed its first floor vote, but its authors, Democratic Sens. Mark DeSaulnier and Loni Hancock, have moved it keep it alive.

“My belief is the public is behind it, and will become more behind it,” DeSaulnier said this week. He said he plans to lobby his colleagues to back the bill, but that “it can be intimidating taking on multi-billionaires. We’ve got a lot of plutocrats in this country now.”

Opposition has been fierce: a handful of Democrats joined Republicans in opposing the bill, and the business community has come out in force to label it a “job killer.” Opponents range from the Chamber of Commerce to the state’s retailers and restaurants associations. The Tax Foundation, which advocates for “fairer, flatter” taxes, has been skeptical as well.

A bill in Rhode Island was more successful. The bill would give companies a preference in state procurement if they don’t pay their executives 32 times or more than the lowest-paid worker in the company.

Democratic Sen. Catherine Cool Rumsey said the focus on inequality led to her think about different ways to address the issue, and she decided to use state contracts as a tool.

“We can, as legislators, as keepers of the purse, help drive those incentives,” she said. “You don’t want to be anti-business but at the same token we have to change the conversation to the impact as a taxpayer.”

The bill was approved in the Senate last week and sent to the House, where no companion legislation has yet been introduced.

Minimum wage hikes — often framed in terms of income inequality — were a popular issue in states and cities this year, as Stateline has reported. Seattle set a historic high-water mark with its $15-an-hour rate, set to be fully implemented by 2017. Several other states have moved to increase their rates, even while Obama’s call for Congress to do the same has gone nowhere.

The debate around the minimum wage is likely to continue through the rest of the year, as several states have placed minimum wage hikes on their fall ballots.

In some states, Democrats and Republicans alike have gotten behind a wage increase. In Michigan, for example, Republican legislators approved an increase to $9.25 per hour by 2018, even though some Democrats saw the GOP’s support as a back-handed attempt to short-circuit a bigger increase that had been headed for the November ballot.  Republican-leaning states such as Arkansas, Alaska and South Dakota also will have wage hikes on the ballot this fall.

Advocates for the working poor have also looked to boost paid sick and paid family leave, arguing that raising the wages of the lowest-paid workers and giving them more flexible hours—so they can keep their jobs—go hand in hand.

“More and more, people see these in tandem,” said Ellen Bravo, executive director of Family Values @ Work, which advocates for family-friendly work policies, “This is exactly what the economy needs: People need to keep their jobs and keep their income.”

Yet those efforts haven’t paid off in the same way. Attempts to start paid family leave programs state by state have hit a wall recently. Cities such as the District of Columbia, New York City and Portland, Oregon, have created or expanded paid sick leave requirements, but opposition from businesses and some lawmakers on both sides of the aisle has halted efforts elsewhere.

Much of the debate this year on inequality has taken place in the context of an economy ever-so-slowly recovering from the Great Recession. Lawmakers in some states have trimmed the safety net in response, saying if government assistance is too generous, workers will have less incentive to re-enter the workforce. Creating good jobs, they say, is the best way to address inequality.

The dynamic played out most prominently with regard to unemployment insurance, both at the state and federal level. Lawmakers considered changes to reduce the number of weeks available and trim benefits, with an eye toward boosting workforce participation.

In Congress, lawmakers allowed federal jobless benefits, which were expanded during the recession, to expire at the end of 2013. Efforts to revive the program this year have failed.

Likewise, some states have cut back their own regular unemployment programs, reducing the number of weeks available to levels not seen in decades. At least eight states have reduced the number of weeks available below the usual 26 weeks, often on a sliding scale that reduced availability as the jobless rate declines. The Missouri legislature approved a similar bill, but Democratic Gov. Jay Nixon hasn’t acted on it yet.

The familiar argument about not letting the safety net become a hammock, as articulated by Republican U.S. Rep. Paul Ryan of Wisconsin, also spawned cuts to other parts of the safety net this year.

In a subtle but significant change, many states opted recently not to continue waivers from the federal government that let their residents collect food stamps without meeting certain work requirements. The moves were cast as welfare reform, to push people back into the workforce.

Pro-growth, business-friendly tax proposals have carried over into the fiscal realm in states this year as well. At the same time, other states wielded the tax code to boost workers’ income.

Efforts to boost business through taxes took the form of cuts to personal and corporate tax rates. Lawmakers in Missouri overrode a gubernatorial veto of a cut in income taxes for top earners. Indiana also cut the state’s corporate income tax rate.

Advocates for the working poor turned to the tax code to boost the earned income tax credit (EITC), a benefit that offsets payroll and income taxes for low-income workers, mostly parents. Obama’s proposal to expand the federal credit hasn’t gained traction in Congress.

The credit is unique in that it generally enjoys support from Republicans and Democrats. The federal credit directs billions in benefits to taxpayers across the country, and 25 states plus D.C. have their own versions.

2014 was a year of expansion, in part thanks to recovered state budgets. Minnesota, Maryland, District of Columbia and Republican-controlled Ohio all approved expansions of their EITCs.

“That’s a really great policy, along with the minimum wage, for making sure that state economies are recovering and that working families get to recover too,” said Erica Williams of the left-leaning Center on Budget and Policy Priorities.