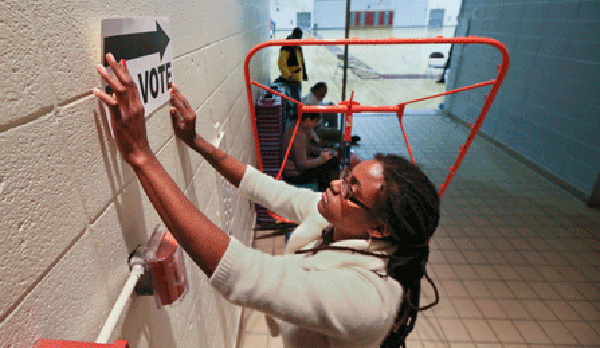 Election worker Ashley Smith hangs a sign at Henry W. Grady High School in Atlanta, which was a polling place during the last statewide election two years ago. In Georgia and other states, voters this fall will weigh in on tax and spending measures that state lawmakers put on the ballot.

When the Georgia General Assembly wanted to enshrine an income tax cap into its constitution – to make sure that future legislatures couldn’t undo it easily -- they mustered a two-thirds majority to send the issue to the voters.

Republicans backed it, and a nuanced argument by Democrats that the cap might create fiscal problems for Georgia in the future fell short.

That “looking-into-the-future” argument is unlikely to sway voters either, according to one of the Democrats who made it. Instead, House Majority Leader Stacey Abrams predicts the income tax cap will pass handily. “It’s been simplified to a question of ‘Do you wish to vote to not raise your income tax?’ It’s hard to go against that,” she said.

Proponents, led by Senate President Pro Tempore David Shafer, a Republican, tout the measure as a way to cement Georgia’s status as a low-tax state. The actual wording:  “Shall the Constitution of Georgia be amended to prohibit the General Assembly from increasing the maximum state income tax rate?”

The Georgia legislature is one of many that sent contentious issues to the voters this year.  Nationwide, lawmakers in 36 states have put at least 86 measures on the November ballot, according to Ballotpedia, a non-profit organization that tracks ballot measures initiated by lawmakers as well as citizens. That number is on pace with earlier years, according to the National Conference of State Legislatures, which reported a total of 115 ballot measures in 2012 and 112 in 2010.

Sixty-one out of the 86 questions are proposed constitutional amendments. There are 13 non-constitutional initiatives, six proposed state laws, five veto referendums that would undo laws approved by the legislature and signed by the governor,  and one automatic ballot referral (which appears without legislative or citizen action) currently certified for 2014 statewide ballots so far.

Voters in seven states will weigh in on fiscal issues in November. In California, for example, voters will decide whether to create a reserve fund using excess capital gains revenue during boom years and an annual contribution equal to 1.5 percent of the state’s general fund.

In Missouri, the question is whether to raise the state sales tax by three-quarters of a cent per dollar and put the money toward transportation projects. Missouri officials say the tax increase would generate an estimated $534 million a year, with 90 percent of the money going to state projects and 10 percent to local projects. It would run for 10 years.

Voters in other states will weigh in on these fiscal issues in the fall:

The stakes are highest for the constitutional amendments, since once they are approved they are “almost impossible to get rid of,” according to Wesley Tharpe, of the progressive Georgia Budget and Policy Institute, whereas lawmakers can undo an ordinary law at any time.

In some states, certain actions have to be cleared by the voters—the issuance of general obligation bonds for example.  Colorado requires voter approval for all tax increases, and Missouri and Washington require voter approval for tax increases over a certain amount, according to NCSL. In every state but Delaware, proposals to amend the constitution must be ratified by voters to take effect.

One of the most controversial measures that will be on the ballot this fall is in Montana, where voters will be asked whether they want to repeal Election Day voter registration.

The U.S. Election Project, which keeps track of voter turnout, put Montana’s turnout rate at 62.6 percent in 2012, 4.4 percentage points higher than the national voter turnout rate of 58.2 percent. According to a 2012 study by professor Barry Burden of the University of Wisconsin, Election Day voter registration has had a “consistently positive” effect on turnout where it is used. But backers of the ballot measure say it makes voting more chaotic, opening the door to fraud.

The process has been controversial since it began in 2005, with Republicans trying repeatedly to get rid of it and Democratic governors using their veto pens, or threatening to, to defend it. Faced with another veto threat from Democratic Gov. Steve Bullock, Montana GOP lawmakers rammed through a referendum with what Democrats said was an unfair process. Nonetheless, it’s on the ballot.

It’s too soon to say how much is being spent on 2014 ballot measures. But an overview of the 2011-2012 election cycle by the National Institute on Money in State Politics, which tracks state political influence spending, found the 2012 elections drew the most money around ballot measures since the institute began collecting that data in 2004. In 2012, 186 measures attracted $939.4 million, surpassing the 2008 record of $813.7 million, the institute reported.

Social issues on the ballot generally attract outside interests. This year, Colorado voters will be asked whether to include fetuses under the definition of “person” and “child” under the state’s criminal law. The voter-initiated effort came after the legislature did not approve a bill, dubbed “the Brady project,” after the name a Colorado woman had planned to give her unborn child. The pregnancy was terminated by a traffic accident and while the driver pleaded guilty to vehicular assault and driving under the influence, there were no charges filed for the terminated pregnancy.

In Illinois, an advisory measure to increase the state’s minimum wage to $10 an hour passed the legislature and is likely to be sent to the fall ballot by the governor , and is also likely to attract interest and money from both labor and business interests.

In North Dakota, the legislature put on the ballot a measure that would make the state the first to define life as beginning at conception. If approved, the measure would provide for the “inalienable right to life” for every stage of pregnancy. Opponents argue that it would effectively ban abortion.

Citizen-initiated measures have fallen in and out of favor over the years. “When the process was new in the early 1900s, there were lots and lots of them on the ballots. The states were new and they were formulating their laws,” said ballot initiative expert Jennie Bowser, who worked for NCSL before striking out on her own as a consultant.

The use of citizen-driven initiatives dwindled until they were revived in the 1970s and really took off in the 1990s with an average of 69 a year, Bowser said. But they have slowed recently, with only 42 in 2010 and 2012. She said the vision of the “passionate volunteers” mounting a petition drive to get an issue on the ballot is mostly a myth. More likely, interest groups pay people to gather the number of signatures necessary in each state.

Marijuana initiatives are on the ballot in Alaska and Florida. Voters in Alaska will be asked whether to decriminalize possession of up to one ounce of the weed and six plants, while Florida voters will decide whether to allow the medicinal use of marijuana under a doctor’s supervision.

Several of this year’s citizen-inspired initiatives involve hunting and fishing. A measure to ban so-called “bear baiting” in Maine is on the ballot for the second time in a decade. The measure would outlaw the use of sweet food, like doughnuts, to lure the bears. It would also ban the use of dogs to run bears up trees where they then can be shot and the use of traps which catch the animals until hunters can shoot them.

In Michigan, the legislature approved two separate bills governing wolf hunting, one setting up wolf season and a second allowing state wildlife officials to spell out specific hunting seasons for wolves and other protected species.  One measure on the ballot this fall seeks to overturn the first law. A petition drive is underway seeking a referendum on repealing the second law as well, meaning the November ballot could feature two wolf hunting items.