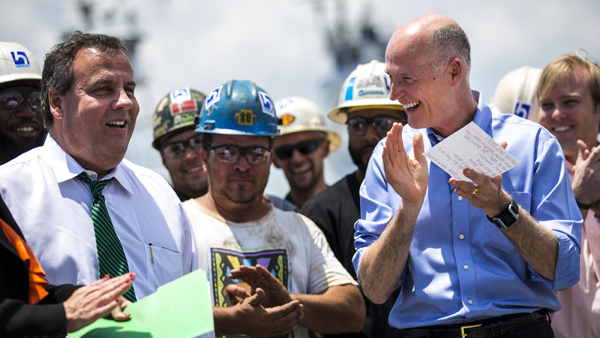 For the first time since the recession ended, state revenues and employment have both surpassed pre-recession levels, at least in the country as a whole. But if this is finally the “good times,” it sure doesn’t feel like it to some states.

A majority of states opened their 2014-2015 legislative sessions this year “in a better budgetary position than at any other point since the start of the recession,” said Gabriel J. Petek, an analyst for Standard & Poor’s credit rating agency.

But while California, New York and Minnesota are raking in tax revenue and churning out new jobs at a pace exceeding pre-recession levels, other states are still struggling.  New Jersey, Kansas, Pennsylvania and fiscally conservative Virginia are among the states fighting budget deficits amid less than stellar tax collections.

California is on the upswing, sitting on a $4 billion surplus that Gov. Jerry Brown, a Democrat, wants to use to pay down debt and build reserves. The state has regained all the private sector jobs it lost during the recession and employment has surpassed its pre-recession peak. In absolute terms, California is second to only Texas in job creation.

New Jersey is trending in the opposite direction, staring at a $2.7 billion deficit over two years. The state’s reliance on overly optimistic revenue forecasts and its failure to make a scheduled pension payment have prompted credit rating agencies to downgrade the state’s debt six times since Republican Chris Christie became governor.

Illinois could make a dramatic turn in either direction. A sweeping effort to pare down a $100 billion pension debt, the most of any state, is mired in court. The legislature adjourned its spring session at the end of May without voting on Democratic Gov. Pat Quinn’s proposal to make permanent the state’s temporary income tax increase. Policymakers will try again, after the November elections.

While overall tax revenues have rebounded nationally, tax collections in 26 states were still below their peaks of 2008 by the final quarter of 2013, after adjusting for inflation, according to the Pew Charitable Trusts’ Fiscal 50: State Trends and Analysis.  (Pew funds Stateline.)

Some energy-rich states have yet to return to their pre-recession revenue peaks, but for some states that’s only because that peak was extraordinary high. Alaska, for instance, was nearly 60 percent below its 2008 peak (see infographic) but the state still started the fiscal year with $11.6 billion in its budget reserve, the most of any state.

The recovery in states is being influenced by national and international factors well beyond state borders. The growth of the overall U.S. economy, fiscal problems in Europe and even the violence in Syria, which could create havoc in oil markets if it spills over into neighboring oil-producing countries, all are playing a role.

“On balance, while the state fiscal picture looks brighter, there continue to be hurdles, both internal and external, that could derail the less-than-robust economic recovery that is currently in progress,” said Sujit M. CanagaRetna, the fiscal policy manager at the Council of State Governments.

The 2014 legislative session was marked by slow economic growth and few dramatic changes on the tax and budget front, said Scott Pattison, executive director of the National Association of State Budget Officers. That might have something to do with the calendar: Thirty-six governorships are on the ballot this November and all but four states have state legislative races. (See Stateline interactive)

“An election-year has an impact,” Pattison said. “There wasn’t an incentive to make significant pivots from current policy.”

But even as state policymakers punted on major overhauls, some did approve tax cuts, just in time for elections. States lucky enough to have  $1 billion surpluses or more this session – including Florida, Minnesota and Wisconsin – opted to return some of the money to taxpayers.

Republican Gov. Rick Scott of Florida last week signed $500 million in fee and tax cuts, including a repeal of higher car vehicle registration fees signed into law by the previous governor, Charlie Crist.  Crist, who was a Republican when he led the state from 2007 to 2011, is trying to regain the governorship this fall as a Democrat. Likewise, Republican Gov. Scott Walker of Wisconsin in March signed $504 million in tax cuts, mostly reductions in property taxes. Since he was elected in 2010, Walker has approved a total of $2 billion in tax cuts.

In Minnesota, another state with a surplus, Democratic Gov. Mark Dayton put $150 million in reserves and another $500 million was returned to taxpayers in the form of lower income and sales taxes.

New York Gov. Andrew Cuomo, a Democrat, signed a $1 billion property tax cut while Republican Gov. Dave Heineman of Nebraska signed three bills that he said would give residents $412 million in income and property tax relief over the next five years. Indiana Gov. Mike Pence, a Republican, in March signed a measure that will gradually reduce the corporate income tax from 6.5 percent to 4.9 percent by 2021.

Lawmakers in Oklahoma and Missouri both reduced personal income tax rates, but the reductions are contingent upon each state meeting future revenue growth targets.  In Oklahoma, Gov. Mary Fallin, a Republican, in April signed a $200 million income tax cut that will gradually lower the top state income tax rate from 5.25 percent to 4.85 percent over several years.

The fight was nasty in Missouri, where the GOP-controlled legislature in early May overturned Democratic Gov. Jay Nixon’s veto of a $620 million tax cut that would reduce the top personal income tax rate to 5.5 percent from 6 percent over 10 years starting in 2017, and phase in a 25 percent deduction for business income reported on personal tax returns.

Some state lawmakers were cautious about reducing taxes too much as they watched revenues in Kansas plummet following tax cuts enacted there in 2012 and 2013. Kansas Gov. Sam Brownback, a Republican, blamed President Barack Obama for the state’s budget shortfalls. “What we are seeing today is the effect of tax increases implemented by the Obama administration that resulted in lower income tax payments and a depressed business environment,” Brownback asserted when April’s tax collections showed $92 million less than expected.

Taxpayers across the country sold stock at the end of 2012 to take advantage of favorable tax rates that expire Jan. 1, 2013, which were part of the “fiscal cliff” negotiations between Congress and the White House. That meant states saw a temporary “bubble” in personal income tax collections the first half of 2013. That bubble has burst in 2014, according to preliminary figures released in May from the Nelson A. Rockefeller Institute of Government.

Virginia, for example, in May reported a $300 million shortfall in revenue for this fiscal year that ends June 30. The state legislature, which typically adjourns in March, is still working on its new budget and debating whether to expand Medicaid under the Affordable Care Act.  If Gov. Terry McAuliffe, a Democrat elected last year, and lawmakers in the politically-split General Assembly don’t agree, a government shutdown in July could threaten the state’s coveted AAA bond rating, which the state has held for more than 50 years (see chart).

Connecticut had to close a nearly $300 million hole that suddenly opened up when revenues plummeted. The state delayed tax breaks, dipped into special state funds and is banking on an additional $75 million in back taxes to balance the budget without raising taxes.

Pennsylvania, which is still working on its budget, has a $1 billion shortfall largely because of lagging state personal income revenue.  The state has a history of using one-time savings or deferrals frowned upon by the rating agencies, which view them as adding uncertainty and risk, especially in the event of an economic downturn.

North Carolina is facing a current deficit of $445 million. The state, which also is still working on its next budget, moved to a 5.8 percent income tax rate for all income levels this year, and it will drop to 5.75 percent in 2015. The state previously had three tax brackets ranging from 6 percent to 7.75 percent.

“Recent tax law changes, not economic conditions, are the reason that collections (in North Carolina) are likely to miss the target” for the remainder of 2014, the National Conference of State Legislatures (NCSL) concluded in a May report.

Budget cuts North Carolina enacted in 2013, as well as cuts in unemployment insurance by the GOP-led legislature, were among the reasons for the “Moral Monday” protests that were renewed last month.

State lawmakers in Montana, Nevada, North Dakota and Texas meet every two years and didn’t have regular sessions this year.

Surpluses for Some States, Deficits for Others Open Data Is Open for Business
RELATED
Topics
Budget Taxes