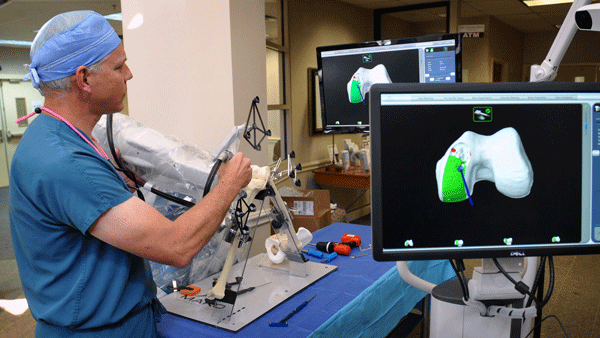 Dr. Steve Wilson, an orthopedic surgeon, demonstrates a robotic surgery device at Kell West Regional Hospital in Wichita Falls, Texas. More states are collecting data to help consumers decide where to go for knee surgery and other procedures based on price and quality.

Nearly a decade before the Affordable Care Act, Maine, Maryland, Massachusetts, New Hampshire and a few other states began creating all-payer claims databases (APCDs).  Acting as trusted third parties, they began requiring all commercial insurance carriers within their borders to hand over their claims data, including the prices consumers paid.

In the last three years, the number of states investing in these painstaking data collection projects has accelerated.  Nineteen states have APCDs in varying stages of development and at least 21 states are considering laws to create them, according to the APCD Council, which assists states in setting up claims databases.

Designed to shed light on the disparate prices doctors and hospitals charge for the same procedures, APCDs have been used by consumers deciding where to go for arthroscopic knee surgery, for example. The pricing and quality data has also been used by insurance companies and large employers to design cost-effective benefit plans. State officials have used APCDs to inform health policy development and measure results.

Critics question whether these complex state databases are worth the effort. Consumer advocates, large employers and most economists argue they are.

“They take a lot of time,” said Christopher Koller, former insurance commissioner for Rhode Island, and president of the Milbank Memorial Fund, a health policy research group. But they have been invaluable to some states in measuring the performance of their health care systems, he said.

Following is a primer on the proliferation of state APCDs and how they are used:

What are all-payer claims databases?

APCDs typically include nearly all medical, mental health, pharmacy and dental claims from all providers in the state. The information is provided by all major payers, including commercial insurers, Medicaid and Medicare.  Some states also require large employers to provide claims data for their self-funded health plans.

Some states use the data to create cost comparison websites for consumers. Maine’s website, for example, allows residents to search for providers for specific procedures by zip code and compare prices and the number of procedures performed.  Utah and New Hampshire have similar sites, and Colorado plans to launch one this month. Others offer the data to researchers and use it internally to inform health care policy and insurance regulation.

Why are these databases needed?

No other major market operates under the kind of secrecy found in the U.S. health care industry where insurance companies individually negotiate the price of each procedure with each hospital and physician, leaving consumers, employers and providers mostly in the dark. Until price and quality of services data are made available to the public, economists say little progress can be made on cutting cost growth.

Patients and the doctors who order their procedures typically make decisions about which providers to use with little price or quality knowledge. Prices are revealed only after services are provided. That would make sense if provider fees were roughly similar. But claims data show wide variation in pricing and quality of service among providers nationwide and even within the same community.

For example, the cost for an appendectomy in California ranges from $1,500 to more than $180,000—even within the same county, according to a recent article published by the American Medical Association. The cost of an uncomplicated knee or hip replacement at 36 different hospitals across the country varies from about $17,000 to more than $35,000, according to an analysis of claims data by the National Institute for Health Care Reform.

Which states have APCDs?

Colorado, Kansas, Maine, Maryland, Massachusetts, Minnesota, New Hampshire, Oregon, Tennessee, Utah and Vermont have databases that are up and running and can be used by researchers to analyze costs.

What information can be derived from the data?

Claims databases have a wide variety of uses.  State officials have used the information to compare the prices local hospitals charge or to track total statewide spending over time. The data has also been used to determine the performance of individual physicians and hospitals by analyzing the services they provided for patients with specific diagnoses.

For example, claims data can reveal whether a doctor followed nationally recommended medical protocols for treating patients diagnosed with diabetes. How many received quarterly exams? Did they receive an eye exam? How many were admitted to a hospital?

Employers, insurance carriers and managed care companies can compare their own claims data to those of all payers in their region to gauge whether they are getting the best value from the hospitals and physicians in their networks.

The theory is that reliable, accurate and complete cost and quality information will empower consumers to make better decisions about their care. They may decide, for example, not to use high-priced hospitals and other health care providers unless their quality and customer satisfaction ratings are equally high. That, in turn, could force providers to either lower their prices or improve their care, or both.

But health economists argue that putting pricing data in the hands of referring physicians, health plans and employers is far more likely to affect buying decisions and push down prices than providing the information directly to consumers.

How much do they cost and who pays?

The cost varies among states. Maine has spent about $5 million since 2002. New Hampshire has spent $3 million since 2005. Maryland and Massachusetts spend about $1 million per year. Colorado spent $2.4 million in its first full year of operation.  According to the APCD Council, New Hampshire uses state general funds, Vermont assesses a fee on health plans, Utah uses Medicaid dollars and Maine and Colorado fund their operations by charging researchers who use the data.

Are other groups collecting and analyzing health care pricing data?

Yes. For more than 20 years, the Dartmouth Atlas Project has documented huge and inexplicable variations in local, regional and national health care prices in the U.S., using Medicare data. Other organizations, including local and regional industry groups, physicians and other provider organizations are also assembling and analyzing health care cost data to help consumers make better decisions about where they receive care.

A national nonprofit group, the Health Care Cost Institute, announced last month that it is creating a consumer website using nationwide data voluntarily provided by three major insurance companies: Aetna, Humana and UnitedHealthcare. Slated to go live in early 2015, the site will include claims data from commercial Medicare Advantage plans and Medicaid and be available to consumers, purchasers, regulators and payers in an easy-to-use, comparable format.

Some insurance companies also make pricing and quality data available to their subscribers and present it in the context of where the consumer is in their deductible. This type of “price transparency” is especially useful to consumers, because it lets them know how much of the fee will come out of their own pockets.

Does anyone oppose claims databases?

Not exactly. At the federal and state level, the issue is nonpartisan. Some doctors and hospitals, however, take issue with the way claims data is presented. Although most major health care industry groups endorse the concept of so-called price transparency, some object to the use of APCDs to determine overall value. They argue that clinical data about the varying health of their patients is needed to provide an accurate picture of a physician’s or hospital’s value.

Insurance carriers also endorse the overall concept, but question the varying data collection methods. “There is broad agreement that greater transparency in health care offers a roadmap for controlling costs,” wrote Clare Krusing, a spokesperson for America's Health Insurance Plans, in an email. “However, there needs to be a discussion about what the states are looking for and how to provide that information in a way that protects individuals' privacy and is less costly and complex than creating a new data entity.”

Are APCDs worth the effort?

It depends who you ask.

Denise Love, director of the APCD Council, works with states to develop effective claims databases. “They are absolutely worth the money,” she says. “States spend billions on health care. Spending a million or so to better manage those costs makes a lot of sense.”

But David Newman, who directs the Health Care Cost Institute, says pricing and quality data should not be collected in 50 separate databases.  “Every state is using its own consultant to do it uniquely,” he said. “It needs to be done using national standards so that data can be compared across states.”

Bob Murray, a consultant who previously directed Maryland’s hospital regulatory agency, said the usefulness of a state APCD depends on how timely, accurate and complete the data are. He suggested states conduct periodic audits to check accuracy.