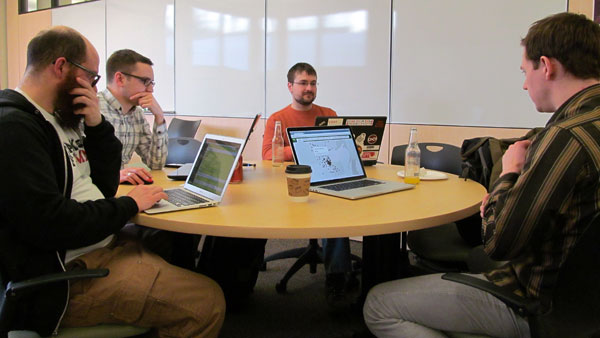 Last month, web designer Sean Wittmeyer and colleague Wojciech Magda walked away with a $25,000 prize from the state of Colorado for designing an online tool to help businesses decide where to locate in the state.

The tool, called “Beagle Score,” is a widget that can be embedded in online commercial real estate listings. It can rate a location by taxes and incentives, zoning, even the location of possible competitors – all derived from about 30 data sets posted publicly by the state of Colorado and its municipalities.

The creation of Beagle Score is an example of how states, cities, counties and the federal government are encouraging entrepreneurs to take raw government data posted on “open data” websites and turn the information into products the public will buy.

“The (Colorado contest) opened up a reason to use the data,” said Wittmeyer, 25, of Fort Collins. “It shows how ‘open data’ can solve a lot of challenges. ... And absolutely, we can make it commercially viable. We can expand it to other states, and fairly quickly.”

They can be as simple as mobile phone apps identifying every stop sign you will encounter on a trip to a different town, or as intricate as taking weather and crops data and turning it into insurance policies farmers can buy.

At least 39 states and 46 cities and counties have created open-data sites since the federal government, Utah, California and the cities of San Francisco and Washington, D.C., began opening data in 2009, according to the federal site, Data.gov.

Jeanne Holm, the federal government’s Data.gov “evangelist,” said new sites are popping up and new data are being posted almost daily. The city of Los Angeles, for example, opened a portal last week.

In March, Democratic New York Gov. Andrew Cuomo said that in the year since it was launched, his state’s site has grown to some 400 data sets with 50 million records from 45 agencies. Available are everything from horse injuries and deaths at state race tracks to maps of regulated child care centers. The most popular data: top fishing spots in the state.

State and local governments are sponsoring “hackathons,” “data paloozas,” and challenges like Colorado’s, inviting businesspeople, software developers, entrepreneurs or anyone with a laptop and a penchant for manipulating data to take part. Lexington, Kentucky, had a civic hackathon last weekend. The U.S. Transportation Department and members of the Geospatial Transportation Mapping Association had a three-day data palooza that ended Wednesday in Arlington, Virginia.

The goals of the events vary. Some, like Arlington’s transportation event, solicit ideas for how government can present its data more effectively. Others seek ideas for mining it.

Aldona Valicenti, Lexington’s chief information officer, said many cities want advice on how to use the data to make government more responsive to citizens, and to communicate with them on issues ranging from garbage pickups and snow removal to upcoming civic events.

Colorado and Wyoming had a joint hackathon last month sponsored by Google to help solve government problems. Colorado sought apps that might be useful to state emergency personnel in tracking people and moving supplies during floods, blizzards or other natural disasters. Wyoming sought help in making its tax-and-spend data more understandable and usable by its citizens.

Unless there’s some prize money, hackers may not make a buck from events like these, and participate out of fun, curiosity or a sense of public service. But those who create an app that is useful beyond the boundaries of a particular city or state, or one that is commercially valuable to business, can make serious money – just as Beagle Score plans to do. Colorado will hold onto the intellectual property rights to Beagle Score for a year. But Wittmeyer and his partner will be able to profit from extending it to other states.

Open data is an outgrowth of the e-government movement of the 1990s, in which government computerized more of the data it collected and began making it available on floppy disks.

States often have trailed the federal government or many cities in adjusting to the computer age and in sharing information, said Emily Shaw, national policy manager for the Sunlight Foundation, which promotes transparency in government. The first big push to share came with public accountability, or “checkbook” sites, that show where government gets its revenue and how it spends it.

The goal was to make government more transparent and accountable by offering taxpayers information on how their money was spent.

Not all states’ checkbook sites are as openly transparent and detailed as Texas, Shaw said. Nor are their open-data sites. “There’s so much variation between the states,” she said.

Many state legislatures are working to set policies for releasing data. Since the start of 2010, according to the National Conference of State Legislatures, nine states have enacted open-data laws, and more legislation is pending. But California, for instance, has been posting open data for five years without legislation setting policies.

Just as states have lagged in getting data out to the public, less of it has been turned into commercial use, said Joel Gurin, senior adviser at the Governance Lab at New York University and author of the book “Open Data Now.”

Gurin leads Open Data 500, which identifies firms that that have made products from open government data and turned them into regional or national enterprises. In April, it listed 500. It soon may expand. “We’re finding more and more companies every day,” he said.

Most of the firms on his Open Data 500 list have turned federal data into products..

Lexington’s Valicenti, who’s also worked for software giant Oracle and the international information-technology firm CGI, said states have the potential to catch up and see more private-sector business developed from data – but only if they continue to get the data out there and encourage their citizens to do something with it.

Will it reach billions of dollars in economic activity? She isn’t sure. “I think the future is good,” she said. Right now, “we’re just working around the fringes.”

Waldo Jaquith, director of the nonprofit U.S. Open Data Institute, newly created to help governments release and promote their data, said the idea of turning government data from all levels of government into a multibillion-dollar industry isn’t far-fetched.

He points to The Climate Corporation, which offers farmers software and crop insurance policies. The company, founded by two Google engineers using 30 years of government weather, soil and crop data, was sold to agricultural multinational Monsanto in October for $930 million.

The economics of data into dollars are easy to understand, Jaquith said. “We live in an information society. For that, you need the data. Who has the data we all can use? Government. It can be valuable to the private sector.”