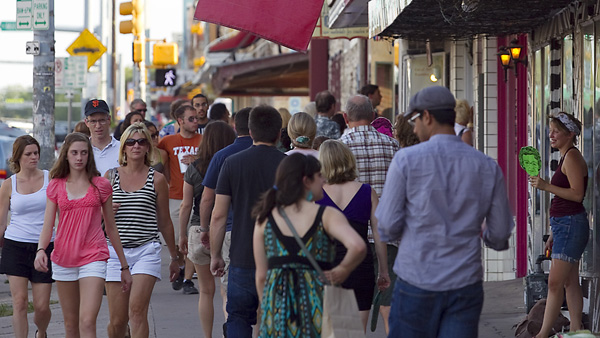 Austin’s streets come alive with music and young people. Texas is one of several states in the South and Southwest drawing a high share of people moving from other states.

Brian McGannon moved last year to Austin from Kansas City, Missouri, for a job, joining a new wave of migration to the South and West.

Austin is “a melting pot of culture and modern progressiveness that I’ve never seen before,” said McGannon, who works as a writer and content manager for Grandex, a media and apparel company.

“The culture shock was definitely at how active the city was, how much buzz there was … and how obsessed everybody is with music down here,” McGannon said.

Between 2010 and 2013, Texas, Florida, the Carolinas and Colorado were the strongest people magnets, drawing nearly a million movers, according to a Stateline analysis of recently released Census Bureau population estimates. Because of a sharp drop in immigration from other countries, movers are now the main force for population change, bucking a decades-long trend of Americans staying put.

Texas leapfrogged over Florida, which drew the most movers a decade ago (from 2000 to 2003), as well as Arizona, Georgia, Nevada, and North Carolina, states that once were more popular with movers.

At the other end of the spectrum, New York, Illinois, California, New Jersey and Michigan together have lost nearly a million people to interstate moves. (See Stateline data visualization)

By region, almost a net 1.2 million people left the Northeast and Midwest for the South and West between 2010 and 2013, according to Stateline’s analysis.

“North Carolina and Texas are very similar in that they’re both what we call ‘sticky states’ – the percentage of adults born here who are still living here is very high, plus we are both really large migrant destinations,” said Rebecca Tippett, director of Carolina Demography, a population research group at the University of North Carolina.

North Carolina draws people of all ages, because of academic institutions in the Raleigh-Durham area, financial centers in Charlotte, mountain retirement colonies and military bases like Fort Bragg, she said, as well as chicken and pork processing centers around the state.

Texas dominates as a people magnet: Over the last decade the number of people moving to the state has nearly quadrupled, from 100,000 to more than 400,000. Austin has become the nation’s “capital for population growth” according to the Census Bureau. But four other Texas cities were also among the top gainers: San Antonio, Houston, Fort Worth and Dallas.

Katherine Nesbitt lived in California, North Carolina and Europe before finding Austin, which she proclaims, “This is the first place that feels like home.” Nesbitt writes a blog to help movers.

While some, like McGannon who moved from the Midwest, can find Austin pricey, by coastal standards it is still affordable, with many downtown condos and large suburban houses still in the $300,000 range.

“We have a large percentage of Californians and New Yorkers moving here, who can't afford to live in those areas anymore, and Austin still seems like a bargain to them,” Nesbitt said. “In Austin they can have access to nearly-comparable jobs as in San Francisco and New York —I’m thinking at least of the creative and tech jobs—and their money can go a lot further.”

Employment is the most common reason cited for moves, especially long distance.  A Pew Charitable Trusts study on economic mobility found that individuals tend to benefit economically when they move, though it is unclear how much movers benefit the economies of their destination cities. (Stateline is funded by Pew). Movement out of the Northeast and into newer areas of the country is nothing new as people seek greener pastures and lower costs.

The job market and the housing market in Texas largely avoided the housing bubble and resulting meltdown in real estate and construction jobs seen elsewhere during the recession, said state demographer Lloyd Potter.

“Relative to the rest of the country we lost fewer jobs. Our economy declined more slowly and then came back more quickly,” Potter said. “We didn’t have the housing bubble in the same way other states did. Fewer homeowners have been underwater.”

Other states seeing boosts from moving include Colorado and Montana, both of which doubled their movers, and North Dakota, which turned a net loss into a gain over the last decade. Montana and North Dakota have become popular destinations since an oil boom boosted the economy along the border between the two states, according to the Federal Reserve Bank of Minneapolis.

Generally, however, interstate moves have dropped in recent decades, and the net moves described here have not yet shown a sustained recovery from the recession, according to demographer William Frey, who tracks migration at the Brookings Institution.

Moves have been dropping for decades, Frey said, “but the rates we have seen since 2007 have dipped exceptionally, and must plausibly be attributed to the mortgage meltdown, the recession and its aftermath,” Frey said even the booming states showed muted growth during hard times for the rest of the nation.

Greg Kaplan, an assistant economics professor at Princeton University who studies all moves between states, a number much higher because it includes moves that cancel each other out in the net gains and losses, notes a long-term trend toward fewer moves that is unrelated to the economy. He argues that because of cheaper travel and telecommunications, people know more about the rest of the country without making experimental moves. The rate of interstate moves has fallen by half since the early 1990s.

“People can visit and gauge how much they might enjoy living in a place and this cuts down on unneeded or regrettable moves,” Kaplan said. Also, there’s less need to move to practice specific skills, he said, as the labor market has become less place-specific.

“There’s less need to move to a certain place to exercise your specific talents,” he said. “You can find a place you like to live and then set about finding a job there.”

Some jobs are still place-specific, like those in oil and gas, which seem to be driving some of the moves to places like Texas, Colorado, North Dakota and Montana.

“It’s almost like every single person who lives there (Houston) works in oil and gas,” said Wade Lombard of Square Cow Movers, an Austin-based company with branches around the state.

States whose residents are moving away, like California, Illinois and New York, are generally large immigrant-rich states that normally host newcomers to the country for a short time and then see them leave for other parts of the country, said Bill Schooling, California’s chief of demographic research.

“Ten years ago we were still in the housing explosion so a lot of immigrants were involved in the construction industry, and then with the slowdown the bubble has burst and there’s a lot less immigration, at least from Latin America,” Schooling said.

He said he can understand why people might opt for lower-cost states if they can find the quality tech jobs California has been known for.

“California doesn’t have cheap housing, and you don’t have to pay a million dollars for a house (elsewhere),” he said.  “At one time a computer programmer in San Francisco would have made much more than in Austin and now that differential has been reduced.”