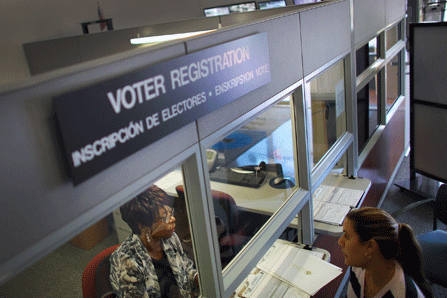 Dorothy Torrence, left, of the Miami-Dade Elections Department, helps Viviana Camacho with voter registration in 2012. More states are taking steps to make trips to register in person or with paper obsolete.

After nearly five years of partisan feuds over state elections laws, there are growing signs that lawmakers are finding common ground on both sides of the aisle, in blue and red states alike.

During legislative sessions this year, several states enacted changes designed to ease the voting process, such as online voter registration and same-day registration. When Illinois finishes the rollout of its online system this summer as expected, more than 100 million eligible voters will live in states offering online registration — about half of the nation’s eligible voters, according to the United States Elections Project.

The raft of new measures comes on the heels of a bipartisan presidential elections commission report released in January that encouraged states to “transcend partisan divisions and view election administration as public administration that must heed the expressed interests and expectations of voters.”

Restrictive measures, such as voter ID requirements, spiked following the 2010 elections, spurred in part by Republican takeovers around the country. Some of these efforts continue. In response, many Democrats pushed laws in 2013 to ease voting in states they controlled.

In 2011 and 2012, there was a wave of restrictive laws that were passed.Jonathan Brater, lawyer for the Brennan Center for Justice’s Democracy Program

“In 2011 and 2012, there was a wave of restrictive laws that were passed,” said Jonathan Brater, lawyer for the Brennan Center for Justice’s Democracy Program. “Compared to that period, this is more of a mixed bag, and we’re certainly optimistic that more states are going to be moving to make voting easier.”

The momentum and partisan cooperation this year have been most evident in online registration efforts. “That is the story this year,” said Wendy Underhill, who follows elections for the National Conference of State Legislatures.

More than half the states now have some form of online voter registration or have approved legislation to launch a system, according to an NCSL tally.

Illinois, also heavily Democratic, is expected to have its system approved in 2013 operational in the coming months.

Last year, then-GOP-controlled Virginia and Democratic-led West Virginia also approved systems that have yet to launch.

Hawaii’s Democratic legislature approved same-day voter registration, and the bill is awaiting Gov. Neil Abercrombie’s signature. This would make it the 11th state, plus the District of Columbia, to allow it. Nebraska and GOP-controlled Utah also approved limited same-day registration measures this year.

“The common sense reforms that have been passed in other states are either coming online or moving forward in new states,” said Lenore Palladino, vice president of policy and outreach at Demos, which advocates for voting rights. “Legislators across the board do see that as something they want to pursue.”

The reasons for the widespread popularity of online voting vary across states. Democrats often get on board with proposals aimed to make the voting process easier. Republicans have been enticed by arguments that a digital registration system can be  more secure. And the prospect of making changes that have saved some states millions of dollars compared to antiquated paper registration systems has played well in many capitals.

It’s being adopted in red states and blue states. It’s just taking off everywhere.Barry Burden, a political science professor at the University of Wisconsin, Madison

California’s move to online registration saved $2.5 million, while officials in Maricopa County, Arizona, reported nearly $1.4 million in savings over four years from 2008 to 2012, according to an Elections Initiative report from the Pew Charitable Trusts, which also funds Stateline.

“It’s being adopted in red states and blue states. It’s just taking off everywhere,” said Barry Burden, a political science professor at the University of Wisconsin, Madison. “There’s a little something for both sides.”

Nebraska was one such state where all arguments found an audience, said state Sen. Bob Krist, who sponsored the online voter registration bill on behalf of Republican Secretary of State John Gale. “People were surprised that all sides of the issue came together and said, ‘This makes sense,’” Krist said. “It was as if it was an understanding that this was the future, this is the right thing to do.”

Some Republicans are warming to the concept, especially as advances in voting administration technology have made the proposals logistically more feasible for often-wary elections administrators.

In Utah, for example, lawmakers approved a same-day registration pilot project, a year after local officials’ concerns killed the bill. It was sponsored by Democratic Rep. Rebecca Chavez-Houck, who teamed up with Republican state Sen. Deidre Henderson to shepherd the bill into law.

For now, the measure is a pilot project and will take effect only in parts of the state. It will allow those who aren’t registered to cast provisional ballots on Election Day, and if their information verified later, their votes will count. Before, a provisional ballot served only as registration for future elections.

“I’m hopeful that Republicans will see it’s a matter of getting people from both parties to the polls,” said Chavez-Houck. “It really wasn’t a Republican versus Democrat thing.”

In some states, however, the battles that have defined voting debates going back to the Bush v. Gore presidential recount of 2000 continue.

Foes of voter ID requirements won big victories recently in the GOP states of Wisconsin and Pennsylvania, for example, when courts struck down their voter ID laws. Citizenship verification measures in other Republican states Kansas and Arizona, which were scrutinized at the U.S. Supreme Court last year, remain an open legal question in the courts.

The Affordable Care Act could also spark new debate: Voting rights activists are pressuring states to allow voter registration through the insurance exchanges, which some states have approved. But how the issue will play out in both state-run and federal exchanges remains unclear.

More generally, though, election reform raises questions about the pace of change and how to pay for it. The White House’s voting commission pointed to the existence of 8,000 different elections jurisdictions, which “makes uniformity challenging.” Along with advocating standardized elections system, online registration and early voting, the commission called for better training and more oversight of election administrators.

That requires money. There has been less movement toward the kind of expensive investments in staffing, training and polling place technology that some say is necessary to truly improve the voting system.

“What they’re faced with is infrastructure. It’s still whether or not you can convince government that you need to spend money, that is usually very expensive, that you need to improve and maintain the system,” said R. Doug Lewis, head of the National Association of Election Officials. “They’ve whetted their appetite for change in the system, but they just don’t want to fund it.”