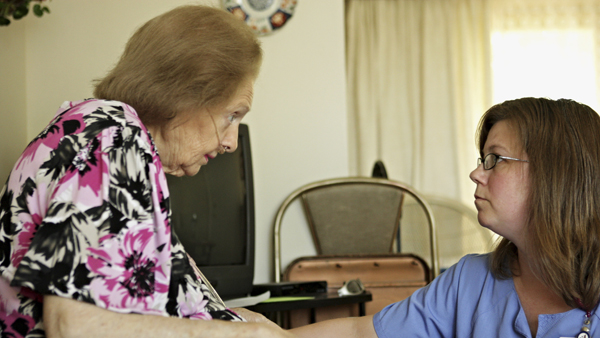 The federal government may reimburse doctors for talking to Medicare patients and their families about “advance care planning,” including living wills and end-of-life treatment options — potentially rekindling one of the fiercest storms in the Affordable Care Act debate.

A similar provision was in an early draft of the federal health care law, but in 2009, former Republican vice-presidential candidate Sarah Palin took to Facebook to accuse President Barack Obama of proposing “death panels” to determine who deserved life-sustaining medical care. Amid an outcry on the right, the provision was stripped from the legislation.

Now, quietly, the proposal is headed toward reconsideration — this time through a regulatory procedure rather than legislation.

The American Medical Association soon will issue recommendations on what doctors should be paid for advance care planning, or conferring with patients about the care they would want if they were incapacitated. Every year, the AMA makes similar reimbursement recommendations to the Centers for Medicare and Medicaid Services, the federal agency that administers the Medicare program and works with state governments to administer Medicaid. CMS and private insurers don’t have to follow AMA’s recommendations, but they typically do.

Medicare is the country’s largest health insurer. It has about 50 million beneficiaries, most of them over 65.

Geriatricians, oncologists and other medical specialists who see gravely ill patients say it’s crucial to elicit a patient’s wishes for treatment and other pastoral or psychological supports in a dire medical situation. Would a particular patient, for instance, want to pursue additional procedures that, while grueling, offer some slim possibility of success? Or would the patient want doctors to intervene only to alleviate pain?

If Medicare reimburses doctors for such discussions, as it pays them for examining patients and performing procedures, they are much more likely to happen.

“We are doing this to incentivize providers to have these conversations with our clients,” said Judy Zerzan, chief medical officer of the Colorado Department of Health Policy.

Phillip Rodgers, a professor at the University of Michigan Medical School and a member of the AMA group that makes compensation recommendations, said a decision by Medicare to approve reimbursement for advance care conversations would allow patients to control decision-making as their medical options narrow. Compensating doctors for such discussions would be an acknowledgement that, “these conversations are a highly beneficial service that makes certain that the care we provide is the right care based on the patients’ wishes,” he said.

Studies show that when given a choice, patients often forgo invasive procedures at the end of life. Such procedures can be costly while doing little to extend or improve the quality of the patient’s life.

Not all feel that way, believing that end-of-life conversations can lead to rationing health care or withholding it entirely.

Burke Balch, director of the Powell Center for Medical Ethics at the National Right to Life Committee, said he wasn’t aware of the AMA’s proposal. But Balch expressed concern that the measure would result in the “denial of life-saving medical treatment.”

It is one thing genuinely to determine what people’s treatment wishes are but the danger is very grave that efforts to pay for advance care planning sessions to Medicare will turn into subtle efforts to pressure some of the most vulnerable patients to surrender their right to live,” Balch said.

Like the current proposal, the provision that sparked controversy in 2009 would have provided Medicare reimbursement to doctors who used office time to discuss living wills, advance care planning or other matters pertaining to patients’ end-of-life preferences. It did not require such conversations, but ensured that doctors or other practitioners would be compensated for these often difficult sessions.

Then Sarah Palin weighed in.  “The America I know and love,” she wrote in a now infamous Facebook post, “is not one in which my parents or my baby with Down Syndrome will have to stand in front of Obama's ‘death panel' so his bureaucrats can decide, based on a subjective judgment of their ‘level of productivity in society,' whether they are worthy of health care.”

“Such a system is downright evil," she wrote.

Whether it was a willful misrepresentation of the actual proposal or a misreading of it (PolitiFact, a fact-checking operation run by the Tampa Bay Times, described Palin’s posting as the “Lie of the Year.”) Palin’s broadside ignited an outpouring of criticism on conservative media.  Other Republicans, including then-House Republican leader John Boehner, picked up the refrain. "This provision may start us down a treacherous path toward government-encouraged euthanasia if enacted into law," he said.

It wasn’t long before the provision was scrubbed from the bill. Two years later, the administration proposed a similar measure through regulation, but withdrew it out of fear of sparking another controversy.

The current effort began last year, when the Illinois State Medical Society recommended that the AMA adopt specific medical codes for the reimbursement of doctors for advance care conversations. Medical codes provide a uniform description of hundreds of medical procedures and services and are used by medical providers, hospitals and insurers across the country. In response to the Illinois request, an AMA panel approved a new code for advance planning.

In the absence of a code, doctors who want to have such conversations with their patients have had to squeeze them into medical appointments ostensibly held for another purpose. Many providers say that forces them to give short shrift to a discussion intended to help a patient — and often, family members — understand all the medical options and the risks associated with each one. Those sessions take time and delicacy, doctors say, and shouldn’t have to be fitted in among other medical procedures or exams.

“It may take up to two hours to bring everyone to an understanding of the situation and the various options,” said Thomas J. Smith, an oncologist and director of palliative care at Johns Hopkins Medicine.

“You essentially have to be deceitful to get paid to do advance care planning for the patient who doesn’t have a medical illness,” said Christopher A. Jones, an assistant professor of palliative care at Duke University.

“The federal government places no value on this conversation. None,” said U.S. Rep. Earl Blumenauer of Oregon, a Democrat who is sponsoring a bill that would require reimbursement for advance care planning.

“If reimbursement occurs at all in the federal program, it’s incidental to the primary treatment or somebody miscodes, and that’s not the way it should be,” Blumenauer said. “Under the best of circumstances, this is a difficult conversation for both doctors and families alike that takes time and focused attention.”

The lack of compensation for advance care discussions is part of a broader pattern:  Doctors who perform procedures, such as surgeons, generally are paid more than those who examine and counsel, such a geriatricians and internists. Studies consistently show that the compensation for  “proceduralists“ is three times or more higher than that of primary care doctors and others  whose practices usually involve diagnosis and noninvasive treatment.

In Congress, Blumenauer is hopeful his bill will get a hearing free of any death panel outcry. It helps, he said, that among his 30 co-sponsors are a number of Republicans, all of whom oppose the ACA.

“They know this is not about the ACA at all,” Blumenauer said by phone from Oregon. “I don’t care if you’re for the ACA or against it or don’t care one way or the other. This is legislation that is supported by 90 percent of the public."