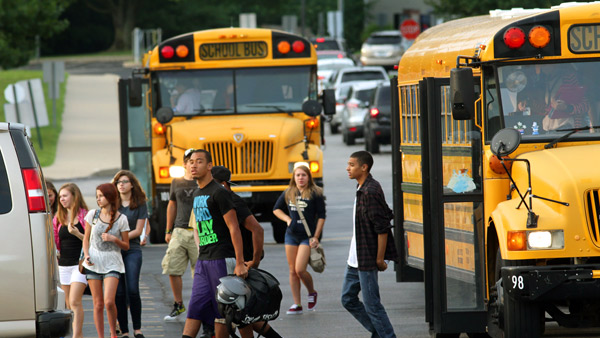 Among the students at Francis Howell Central High in Cottleville, Missouri, are dozens of transfers from the Normandy School District, which is being dissolved July 1 and restarted by the state. States often step in to help school districts that are financially struggling.

Pushed to the brink of financial ruin, the Normandy School District in Missouri will officially breathe its last breath on June 30.

The district’s finances buckled this year under the weight of a state law that requires school districts that fail to meet certain academic standards to pay tuition and transportation costs for students who want to transfer to other districts. Normandy, which lost its state accreditation in 2013, saw about 1,000 students, or 25 percent, of the district’s students move to other schools this year at a price tag of about $8 million.

Normandy is not alone among school districts struggling with serious financial problems. Each year, a handful of school systems across the country fall into such deep financial or academic trouble that states step in to help – or even take over entirely. The number remained steady in the first few years after the recession, despite fears that it would increase.

Last year, for example, the Buena Vista School District in Michigan laid off its 27 teachers and ended the school year weeks early after running out of money. Both Buena Vista and Inkster, another Michigan school district, were dissolved last year and their students transferred to neighboring districts.

The Michigan Department of Education is currently monitoring another 46 school districts in financial trouble; each district must submit a plan to eliminate its budget deficit within two years after the state has approved the plan.

In New York, 13 percent of school districts evaluated recently by the state comptroller’s office were found to be “operating with dangerously low or nonexistent fund balances, chronic operating deficits and extremely limited cash on hand.”

In Missouri, the state is dissolving the Normandy district effective July 1 and starting a new school system to be managed by a state-appointed board. Last week, the school district filed a lawsuit hoping to stave off the dissolution of the district.

“We’re really in uncharted territory,” said Mike Lodewegen, director of legislative advocacy for the Missouri Council of School Administrators. “It’s hard to know how this ends.”

School districts can get in financial trouble when state aid is cut, student enrollment drops or finances are mismanaged. In the Detroit school system, for example, student enrollment plummeted from 164,000 to 52,000 from 2002-03 to 2012-13, increasing its operational debt.

Colorado beefed up its oversight of school district budgets after the St. Vrain Valley School District discovered a $14 million shortfall in 2002, blamed on accounting errors. The state bailed out the school district with a loan and imposed increased state review.

Michael Griffith, a school finance consultant with the Education Commission of the States, which tracks state policy trends, said that every state has laws covering school districts facing financial emergencies, which range from requiring a school district to provide the state with additional financial information to having the state approve a school district’s budget.

Some states have adopted emergency provisions to help struggling school districts out of a bind, including allowing them in some cases to break or renegotiate union contracts.

As the recession wound down in 2009, for example, Idaho lawmakers approved legislation allowing school districts meeting certain conditions to declare a financial emergency, allowing them to renegotiate teacher contracts. The following year, state leaders declared a financial emergency for all school districts to allow them to take advantage of the law.

Beyond state takeovers, some states allow school districts to file for bankruptcy protection under Chapter 9 of the federal Bankruptcy Code, which gives municipalities, including cities, towns, school districts and municipal utilities, a chance to reorganize their debts.

Of the 312 public entities that have filed for Chapter 9 since 1954, only six have been education-related districts, according to James Spiotto, managing director of Chapman Strategic Advisors, who wrote a book about how municipalities deal with financial emergencies. The most recent ones were the Ellicott School Building Authority in Colorado and the Chilhowee R-IV School District in Missouri, both in 1992.

Spiotto said that while it’s not unheard of for school districts to run into money problems, states have historically done a fairly good job of flagging school districts in danger and helping them dig out, unlike municipal governments and authorities, which can often run into serious trouble before anyone notices.

“The reason why you don’t hear about (school districts) melting down is that by and large most states have some supervision over school districts,” Spiotto said.

Still, there is some concern that as unfunded school employee pension obligations grow, more school districts could find themselves in dire financial straits.

“What people are arguing now is because of pension obligations and the way schools are funded, some of these districts have permanent problems, and the permanent problems are extremely difficult to solve,” Griffith said. But because the pension obligations are long-term, it can be difficult to judge just how serious the problems might be, he said.

Spiotto hopes that with state help, most school districts can figure out a way to keep operating. “It’s essential to the economy of any city or state to have a good educational program,” he said. “People don’t move in or expand businesses if you don’t have essential services at an acceptable level.”