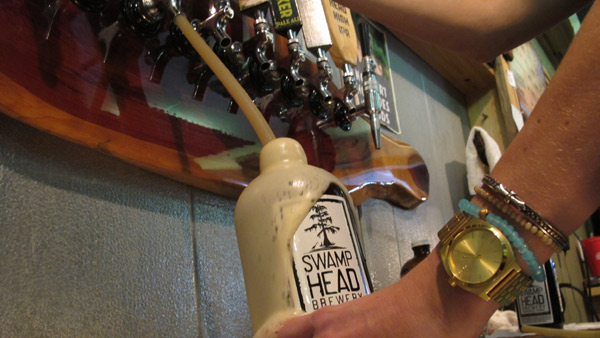 A 32-ounce container, known among beer enthusiasts as a growler, is filled at the Swamp Head Brewery in Gainesville, Florida. A fight to legalize half-gallon growlers led to a legislative debate on craft beer regulations.

What do growlers, taps, Busch Gardens and the Florida legislature have in common?

Laws regulating the brewing and distribution by small or “craft” brewers in the Sunshine State have become a flashpoint for efforts to change liquor laws in other states. Larger beer interests and wholesale distributors are looking to legislatures for regulations that would make the smaller brewers follow the same state-by-state rules as they do. Those rules govern everything from the size of containers used for the beer to how much can be distributed, if any, outside the wholesaler system.

According to Beer Marketer’s Insights, a trade industry publication, the craft beer industry produces 16 million barrels annually, approximately 7.8 percent of the total beer volume in the U.S. Back in 2008, the crafters produced only 8.9 million barrels for a 4.2 percent share.

The craft beer industry is growing 13 percent to 14 percent each year, with a commensurate drop in production by the “big guys” like Anheuser-Busch and Coors, from 177.6 million barrels in 2008 down to 162.7 million in 2013, said Beer Marketer’s vice president Eric Shepard.

Some large brewers have tried to get into the craft beer market by either making a new small-batch beer, or buying a smaller company as Miller-Coors did by acquiring Blue Moon.

Other states see the craft beer industry as a boon to economic prosperity and tourism which should be protected and nurtured. The Brewers Association, which represents the craft beer industry, estimates that small beer brewers employ about 110,000 people nationwide, about 62,000 of them full time. As the industry grows, so do the number of jobs, the association said.

The fight in the Florida legislature crystalized all the arguments nationwide. The issue divided small beer makers from large ones and energized the wholesale industry. The Florida fracas started out with a minor issue over the size of “bring your own” containers and ended up in a major dispute about how beer is distributed throughout the state.

•     Hawaii: A bill creating a new license class for small brewers, which doubles the number of barrels from 30,000 to 60,000 a year and permits them to use growlers on their premises, is on Democratic Gov. Neil Abercrombie’s desk. (Growlers are refillable jugs, usually gallon-sized.)

•     Wisconsin: A bill allowing craft brewers to sell to customers in growlers exceeding 24 ounces failed to get out of committee.

microbrewers can produce and sell directly, from 30,000 barrels per year to 60,000. Also, microbreweries that produce less than 1,000 barrels of beer per year are now able to distribute their product directly to retailers under certain conditions.

Nationally, the Brewers Association is calling on Congress to pass legislation that would lower excise taxes on small brewers with an annual production of 6 million barrels or less. At the same time, the Beer Institute, which represents both large and small brewers, is backing a bill that would lower federal excise taxes for all brewers and importers. The federal beer excise tax, at $18 a barrel, has not changed since 1991, a testament to lobbying against higher taxes by the beer industry.

According to the Center for Responsive Politics, the National Beer Wholesalers Association spent $1 million on lobbying in 2013 and has contributed $1.6 million to congressional candidates so far in the 2013-14 election cycle.

Congress has shown no inclination to act on either bill, which shifts the debate to states such as Florida.

The issue surfaced when craft beer brewers in the state called on the legislature to allow 64-ounce refillable reusable growlers. The state currently allows growlers of other sizes, but not the 64-ounce jugs, which are standard in many states. Patrons bring their growlers to breweries, which fill them up and charge only for the beer.

Paul Gatza, director of the Brewers Association, said 46 states plus the District of Columbia allow 64-ounce growlers to be used in brew pubs for beer consumed on the premises. The exceptions, aside from Florida, are Alabama, Georgia and New Mexico. He said 44 states allow growlers under a manufacturer’s license for takeaway. The six exceptions are Alabama, Georgia, Mississippi, Nevada, Oklahoma and Texas.

While it started with growlers, the Florida fight got complicated when various beer interests decided it was time to modify other beer laws too.  One effort was to make larger craft brewers (making more than 1,000 barrels annually) sell their beer to wholesalers, rather than directly to consumers. The three-tiered system (brewers, wholesale distributors and retailers) governs larger brewers, and dates to Prohibition.

Under the proposal, small brewers that produce their own beer and want to sell it in bottles would have to sell first to the distributors and then buy it back, particularly if they wanted to transfer the beer to a sister facility. Brewers with fewer than 1,000 barrels could still sell directly to consumers.

The Florida Senate approved a bill that would have prohibited brewers making more than 1,000 barrels a year from selling no more than 20 percent of their beer themselves, without going through a wholesaler. The bill died in the House without a vote.

Key to the bill’s demise was Rep. Dana Young, a Republican from Tampa and the GOP whip, who defended the craft brewers as a boon to the economy and tourism.  Florida is one of the fastest growing craft beer states; between 2011 and 2012, craft beer production grew 43 percent.

“I am fiercely loyal to small business,” Young said. “I saw a bill that was very punitive to a growing sector of our state economy. I worked very hard to see that bill was not heard in the House.”

The “tourism” argument began with a 1963 state law that allowed breweries to sell beer to the public at their brewing sites. That allowed Anheuser-Busch and Schlitz to have beer gardens at their breweries. When Anheuser-Busch asked to sell beer at Disney World in Orlando when it opened in 1971, legend has it that Walt Disney said no, fearing that beer sales would hurt Disney’s “family” image. Anheuser-Busch then built a rival theme park, Busch Gardens. In 2012, Disney World allowed beer and wine sales for the first time.

But today, the Florida beer wholesalers said it’s not fair to let craft brewers sell beer in cans or bottles without going through a wholesaler, as the larger beer companies must do.

“We support brewers being able to sell growlers of the beer they brew on the premises,” said Mitch Rubin, executive director of the Florida Beer Wholesalers Association. “We support on-premises consumption of the beer they brew. And we supported the brewers being able to sell other manufacturers’ beers that they obtain through a distributor for on-premises consumption.”

But, he said, “They would not be able to sell beer in cans, bottles, and kegs – either theirs or other manufacturers.”

Joshua D. Aubuchon , executive director of the Florida Brewers Guild, representing the craft brewers, lamented that a bill that was simply supposed to help his clients sell growlers devolved into a bill with “all sorts of negative consequences,” not the least of which was to restrict craft brewers from selling their beer between two or more of their own locations without going through a distributor.

Florida has become “the most extreme example of the growing tension between craft brewers and wholesalers in some states,” Beer Marketer’s Shepard said.

The tension has produced a flurry of political contributions to Florida lawmakers, particularly from the wholesale side, according to the National Institute of Money in State Politics. Since 2008, beer and liquor wholesalers have contributed $1.2 million to candidates for Florida state offices and $1.8  million  to Florida political parties, the institute said, with Republicans getting more than twice as much as Democrats.