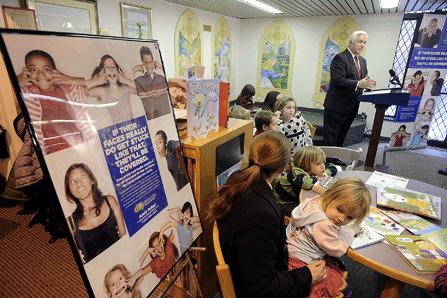 Republican Pennsylvania Gov. Tom Corbett discusses the Children's Health Insurance Program at a library in Wilkes-Barre. Over the next five years, states will decide whether to continue running their CHIP programs or turn to new insurance subsidies for low-income families under the Affordable Care Act. (AP)

The Children's Health Insurance Program (CHIP) was enacted in 1997 to extend health coverage to children in poor families with modest incomes too high to qualify for Medicaid. The Affordable Care Act now offers many of those same families federal subsidies through the health insurance exchanges, calling into question whether the program should be continued over the long term.

CHIP helped lower the uninsured rate among low-income American children from 25 percent in 1997 to 13 percent in 2012, and the program has strong bipartisan support at the state and federal level. Still, some states – particularly those that have opted to expand Medicaid to more low-income adults – may decide that families would be better served by enrolling everyone in the same insurance plan.

Following is a primer on CHIP and its evolving role under the ACA.

Under CHIP, the federal government bears a higher percentage of the overall cost than it does under Medicaid, averaging 71 percent nationwide, compared to about 57 percent for Medicaid. Another difference between CHIP and Medicaid is that CHIP is a block grant, not an entitlement. That means states can create waiting lists for the program when state revenues run short. By contrast, states must provide Medicaid coverage to all eligible applicants, no matter the cost. (Under Medicaid, states can set their own income eligibility rules for non-disabled adults, but they must cover children, pregnant women and disabled adults up to federally specified income levels.) 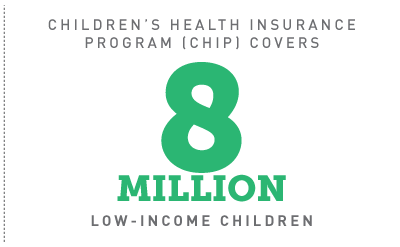 Historically, CHIP has covered kids up to 19 years old with family incomes from 138 percent of the federal poverty level ($32,913 for a family of four) to as high as 405 percent ($96,592 for a family of four), depending on the state program. In families with incomes below 138 percent of poverty, young children from infancy to 6 years old are covered under Medicaid and, until this year, older children in families with the same income level were covered under CHIP.

How does the Affordable Care Act affect CHIP?

The Affordable Care Act (ACA) extends funding for CHIP through Sept. 30, 2015. At that time, the federal matching rate would increase by 23 percentage points to 94 percent, lowering the average state share of funding to 6 percent. But that's only if Congress extends funding for the program beyond 2015.

Physicians, advocates for children and other groups recommend Congress extend funding to 2019, when the federal law gives states the option of dropping the program.

Currently, if a child qualifies for CHIP, the family cannot receive federal tax subsidies to cover the cost of including the child in their federally qualified health plan under the ACA. However, if a state decides to discontinue its CHIP program, families with children who were previously covered by the program could become eligible for federal tax subsidies to cover their children under one policy.

The ACA also required states to shift children ages 6 to 19 in families with incomes between the poverty level ($23,550 for a family of four) and 138 percent of poverty out of CHIP and into Medicaid by last Jan. 1. The rationale was that parents and children would be best served if they were covered by the same insurance plan, with the same doctors and hospitals and enrollment rules.

Since the federal health law assumed that all states would expand Medicaid to adults with incomes up to 138 percent of the poverty level, it made sense to cover the children in those families under the same program. Although nearly half of all states have chosen not to expand Medicaid to adults, children in those states ages 6 to 19 will still be moved into Medicaid. Nationwide, the transfer from CHIP to Medicaid will affect more than 1.5 million low-income children, an enrollment reduction of nearly 30 percent from the CHIP program.

Why would states eliminate CHIP?

Although states pay only a small share of the cost of CHIP, coverage of the same low-income families would be cost-free for states if they eliminated CHIP and directed families to the health insurance exchanges. In addition, some states may decide to dismantle CHIP to simplify public insurance options for families who may already have members enrolled in Medicaid and private insurance on the exchanges.

However, states may choose to continue CHIP because of its bipartisan support and proven track record. In general, kids are cheap to cover because they are healthier than adults. States' decisions on CHIP will rest in part on the relative success of insurance exchange policies at enrolling kids and keeping them healthy.

What other ACA provisions target children?

The ACA primarily aims to insure more adults, including parents. In the process, a substantial number of uninsured children are expected to get coverage as their parents learn more about federal and state subsidies.

According to a study by the Urban Institute, the federal health law could result in new coverage for as many as 3.2 million uninsured children because of tax credits offered on health insurance exchanges and overall outreach efforts. In addition, the law requires insurance companies to provide improved benefits for kids, including preventive, dental and vision care, and behavioral health services.

Does the ACA make it easier for low-income parents to get coverage for their kids?

The ACA makes it easier for states to maintain or expand their CHIP programs by providing more federal funding. But what is considered an error in the law – the so-called “family glitch” – is expected to prevent as many as 56 percent of low-income families who qualify for CHIP from getting federal subsidies on health insurance exchanges if CHIP were to end.

Under the law, anyone who is offered “affordable” insurance by their employer is not eligible for federal tax credits. Affordable insurance is defined as coverage for an individual that does not exceed 9.5 percent of a worker's income.

Will exchange coverage cost families roughly the same as CHIP?

It is too soon to tell.

One state serves as an example. Arizona began dismantling its CHIP program in 2009, before the ACA was enacted. Most children were transferred to the state's Medicaid program, but about 14,000 children whose families had incomes too high to qualify for Medicaid were directed to find alternative coverage this year.

It is not known how many of those families purchased policies on Arizona's federally-run insurance exchange. But a new study from Georgetown University's Center for Children and Families found that the federally subsidized policies they would have qualified for had substantially higher out-of-pocket expenses, including co-pays and deductibles, than CHIP coverage. Hardest hit, the researchers said, would be families with the lowest incomes and those with more than one child.

Costs for dental services were particularly high on the Arizona exchange, the study found, because the ACA requires insurance companies to include dental services for kids only if separate dental policies do not exist in the local market. For families in markets with stand-alone dental policies, the coverage represented a significant additional charge.

Whether the out-of-pocket costs for qualified insurance plans on the exchange will be more expensive than CHIP in 2019 is unknown. For that reason, advocates are urging states not to make hasty decisions about dropping CHIP coverage until exchange markets further develop and better enrollment and cost data is available.

Are benefits for exchange policies comparable to those for CHIP?

That is a question state health care officials are studying. The federal health law requires insurance companies to include benefits such as mental health, dental and vision care that theoretically would be similar to CHIP benefits.  But individual insurance policy details such as how many mental health counseling visits are covered and whether dental coverage includes orthodontia and at what cost have not yet been analyzed.

Are all state CHIP programs the same?

No. The median income eligibility threshold for CHIP is 255 percent of poverty level which is $60,818 for a family of four, according to the Kaiser Family Foundation. But states vary widely, with New York offering coverage at the highest income level (405 percent of the federal poverty level or $96,592 for a family of four), followed by Iowa (380 percent), New Jersey (355 percent), the District of Columbia (324 percent), Connecticut and New Hampshire (323 percent) and Maryland (322 percent).

Nevada has the lowest income eligibility level at 175 percent of the poverty level ($41,738 for a family of four), followed by Idaho (190 percent), and Nevada, Utah, Virginia, West Virginia and Wyoming at 205 percent.

Nationally, 88 percent of eligible children were enrolled in either CHIP or Medicaid in 2012, compared to about 74 percent of adults who qualified for Medicaid, according to analysis from the Urban Institute. In 21 states, the participation rate was 90 percent or higher, while four states, Alaska, Montana, Nevada and Utah, signed up fewer than 80 percent of those eligible.

States also have leeway under federal rules to develop varying benefit packages and cost-sharing arrangements. A new study by the National Academy for State Health Policy found that, despite the flexibility, most state benefits were similar to those provided to children covered by Medicaid, and all states offered low or no premiums and other cost sharing.

Administration of the program also differs. When CHIP was launched, 21 states chose to create separate CHIP programs. The remaining states opted to cover children under an expanded Medicaid program. This year, two more states, California and New Hampshire, decided to merge their CHIP programs into Medicaid.