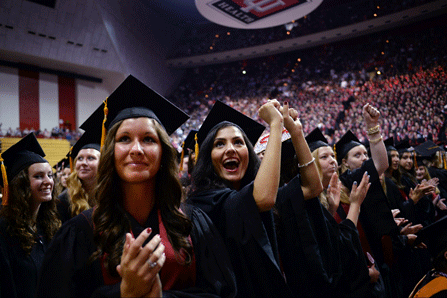 Students at Indiana University celebrate at commencement ceremonies in Bloomington, Indiana, last week. Indiana State University has promised students they can graduate within four years or be able to take remaining courses for free, one of the ways public colleges and institutions are trying to help students to afford college as tuitions goes up. (AP)

Once public university tuition goes up, it rarely, if ever, goes down.

Since the Great Recession ended, states have been struggling to control tuition costs with a patchwork of tuition freezes, more student aid and additional state funds.

Caught in the middle are students and their families, who have had to pick up a growing proportion of the cost of college by paying higher tuition. Average tuition and fees at public four-year colleges grew from $7,008 to $8,893, or 27 percent, from 2008-09 to 2013-14, according to a study by the College Board.

State and local funding for public colleges and universities is finally on the rise again in many states, after hitting bottom in fiscal year 2012. States appropriated 5.7 percent more to higher education in fiscal 2014 compared to the previous year, ranging from an increase of 27.3 percent in New Hampshire to a cut of 8.1 percent in Wyoming.

Despite the recent upswing, however, states are still spending an average of 23 percent less per student on higher education than they did when the recession hit at the end of 2007, according to the Center on Budget and Policy and Priorities.

In fiscal  1988, public higher education institutions received about 24 percent of their educational revenue from tuition, according to the nonprofit State Higher Education Executive Officers (SHEEO). Since then, the proportion has grown most years, reaching a high of 47 percent in fiscal 2013.

Another way to look at the shift: In fiscal 1988, the average tuition at a public institution was more than what the state spent per student in only two states, New Hampshire and Vermont, according to CBPP. In fiscal 2013, tuitions exceeded state funding per student in 23 states.

“There essentially has been a cost shift over the years in who pays for higher education going from states to students and families,” said Daniel J. Hurley, associate vice president for government relations and state policy for the American Association of State Colleges and Universities.

The implications of rising tuition at public institutions are significant, particularly for students from low-income families, at a time when there is growing recognition that a postsecondary education is essential in today's economy.

In response, states are trying a variety of tactics to help students afford college, including increasing financial aid and offering institutions funding increases in exchange for promises to freeze tuition or keep increases to a minimum. 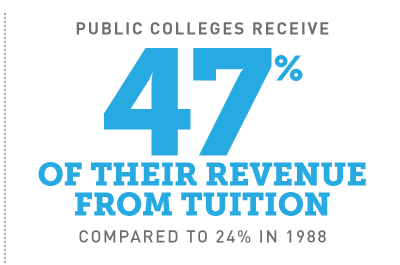 Another growing trend is performance funding, in which states direct some of their aid to colleges and universities based on their achieving key targets, such as helping students graduate on time.

“States are looking around at ways to reduce the burden on students of getting degrees without increasing the burden on the states,” said George Pernsteiner, president of SHEEO. “That will continue as a trend for a while. The real challenge, I think, for colleges and universities, is (finding) a way to reduce the cost of a degree.”

State aid to public education is always a prime target when state lawmakers need to balance their budgets, because they figure colleges have the option of charging higher tuition, Pernsteiner said.

While tuition increases may slow after a recession has ended, as they have in recent years, tuitions almost never decrease, in part because state funding for higher education never quite recovers to where it was before a recession. From 2001 to 2011, for example, the proportion of state and local tax revenues going to higher education dipped from 7.3 percent to 6.5 percent, according to SHEEO.

“Every time we come out of a recession, we have a new level of tuition,” Pernsteiner said. “It sets a new baseline because states have all these other obligations they have to pay that 25 years ago were not as acute.” Areas such as corrections, pension plans and health care costs have risen across the country, swallowing larger chunks of state revenues over time.

Bob King, president of the Kentucky Council on Postsecondary Education, said, “It's a complex problem, in the sense that there are some fundamental issues that states have to wrestle with and the choices that they make in terms of how to spend the resources that they have.”

“This is not sustainable in an era when more and more students from lower income families need to attend and graduate from college,” he added.

While all of the blame for rising tuition does not fall on the states, much of it does, said Donna Desrochers, principal researcher at the Delta Cost Project at the American Institutes for Research, which studies how colleges spend their money.  “College spending hasn't been going up nearly as fast as tuition.”

How States Are Helping

Many states are trying to offset climbing tuition prices by increasing financial aid. From fiscal 2008 to 2013, states increased financial aid at public institutions from $5 billion to $6.4 billion, or 28 percent, according to SHEEO. Fifteen states cut financial aid over the same period.

“A lot of students who go to public universities, and particularly to the public flagship universities, do come from affluent families and can afford to pay,” Baum said. “There are strong arguments for targeting subsidies on people who need it. On the other hand, it's a balance question – it doesn't mean it's fine to double your tuition every year.”

While it's too early for definitive nationwide numbers for the upcoming fiscal year, anecdotal reports from individual states indicate higher education funding will continue to rebound from recessionary lows, said Dustin Weeden, a policy specialist with the National Conference on State Legislatures.

Colorado will increase funding for higher education for the fiscal year that begins July 1 by $100 million, including $60 million for the universities, representing an 11 percent increase, and $40 million for financial aid. Along with the increased funding, the newly adopted College Affordability Act limits most tuition increases to 6 percent for resident undergraduate students. According to one recent study, Colorado ranked 49th in the country for state funding per student in 2011-12.

"While this does not solve the long-term financial outlook for higher education in Colorado, it does represent a step in the right direction and helps keep higher education within reach for more Colorado students,” said Lt. Gov. Joseph Garcia, who is also executive director of the state Department of Higher Education. “By ensuring students have both access and support today, we produce an educated workforce for a thriving economy tomorrow.”

In Iowa, the state legislature in April approved a funding increase for the state's public universities, in exchange for the universities agreeing to freeze tuition for the second consecutive year, which hasn't happened in 35 years, according to the office of Republican Gov. Terry Branstad. The governor has said a tuition freeze is a top priority, although he has not yet signed the bill.

In 2011, Indiana adopted a new statutory requirement that requires the state Commission for Higher Education to set nonbinding targets for tuition for public institutions.  From fiscal 2013 to fiscal 2014 Indiana increased state funding for higher education from $1.7 billion to $1.9 billion, or 15 percent, including an additional $44 million for financial aid.

Indiana's public institutions are trying to help students afford college in many ways. Some examples of the state schools' efforts: