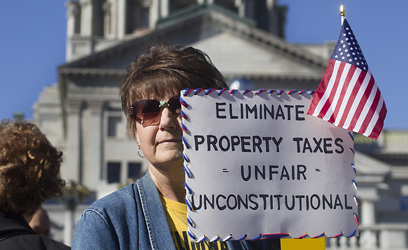 State Sen. David Argall thinks Pennsylvania's law to fund schools with property taxes, which dates from the 1830s, has outlived its usefulness. He is pushing a bill that would eliminate property taxes levied by school districts and replace the revenue with higher state income and sales taxes.

For the first time, his idea is gaining some traction.

Argall, a Republican, has tried before to scrap the property tax collected by school districts, but this year he got more than half the state senators to co-sponsor his bill. He said the problem with property taxes is that “the tax has very little connection to the ability to pay.”

“It can literally make people homeless,” he said.  “It can drive seniors on a fixed income out of a home that they may have built 50 or 60 years ago. It's incredibly unfair.”

Property taxes stick in the craw of taxpayers not just in Pennsylvania but in many other states. Homeowners on fixed incomes, in particular, loathe the tax because it rises with property values, while their income does not. Retirees are very vocal in their opposition to the property tax, and they tend to vote in higher numbers than younger people.

According to the Tax Foundation, an anti-tax research organization in Washington, D.C., the percentage of state and local revenue collected through property taxes ranges from a high of 63 percent in New Hampshire (which has no income tax) to a low of 16 percent in Delaware and North Dakota. The national average is 33 percent.

In addition to Pennsylvania, other states also are grappling with how to lower property taxes or make them fairer. But replacing property tax revenue is not easy, and the tax also has defenders – usually the constituencies that would pay more taxes if they went away.

In California, the “parcel” tax arose from the ashes of Proposition 13, the groundbreaking property tax-limiting ballot measure approved by voters in 1978. The state Senate has passed a bill to restore localities' ability to levy parcel taxes at rates based on land classification – commercial, residential or industrial – after a state court struck it down in 2013 as unclear.

The bill now goes to the Assembly, where it faces strong opposition from Republicans who argue it would hurt working families and prompt businesses to leave the state, according to Senate Republican Leader Bob Huff. Democratic Sen. Lois Wolk argued the levies were essential to meet local needs, noting 322 parcel taxes have been approved in 584 elections as a way to circumvent Proposition 13.

Supporters of the property tax argue it is a relatively “good” tax, since revenue from it is controlled locally and pays for things like schools and public safety that people can readily see. David Brunori, a professor at George Washington University and an expert on state and local taxation, described Argall's proposal to scrap it as “asinine.”

“Every public financing expert in the world says it's the ideal tax for public services and he wants to eliminate it? It's efficient, effective and it's generally a very good tax,” Brunori said.

Argall's proposal would replace the revenue currently raised by the property tax by upping the personal income tax to 4.34 percent from the current 3.07 percent. His measure also would increase the sales tax to 7 percent from 6 percent, and subject some additional items to the sales tax – for example, clothing that costs more than $50 and dry cleaning – which have been exempt.

Under Argall's bill, school districts would get state funds based on a formula that takes into account the amount of property tax collected before the new system went into effect, with the goal of granting the districts approximately the same amount of money.

But the Pennsylvania Budget and Policy Center, a liberal think tank, and a coalition of education and civic engagement groups are worried the change would disrupt the reliable stream of funding for schools. Other opponents include the Pennsylvania Chamber of Business and Industry, which fears that raising income and sales taxes would hurt the state's economy.

“Putting the entire public education system on those two taxes during a recession could force the business community to pick up the slack,” said Todd Brysiak, a spokesman for the chamber.

The Senate's finance panel is expected to approve Argall's bill in a few days, and it has strong support in the full Senate. The House, however, rejected similar legislation on an amendment earlier this year, and is apt to do it again. Gov. Tom Corbett, a Republican, has expressed support for the bill but has noted that the revenue must be replaced.

Argell is sure his stance is popular with his constituents, who have little patience for the argument that property taxes are the fairest way to pay for schools. “If I made that argument defending the status quo in any of the six counties I represent, I would get fired,” he said.

But eliminating property taxes also entails political peril for state lawmakers. G. Terry Madonna, director of the Center for Politics and Public Affairs at Franklin and Marshall College, said state lawmakers might not get the credit for reducing property taxes since they are levied at the local level, but would get the blame for raising income and sales taxes.

“The concern there is they get the blame for the raise but not the credit for the reduction,” he said.