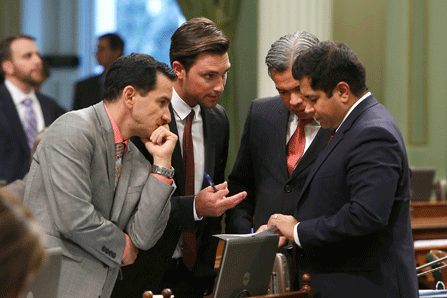 Assembly member Ian Calderon (second from left) wants California to have a state entrepreneur-in-residence program. Some cities and states are seeking the advice of entrepreneurs. (AP)

Entrepreneurs in government? The idea may sound like an oxymoron to government bashers.

Yet a move is on to bring successful entrepreneurs into state agencies, city halls and economic development agencies to help stimulate business and job growth – and, important to many advocates, help bureaucracies become more creative, efficient and responsive to the public.

“Those of us in business always say we want government to be more businesslike,” said Virginia state Del. Steve Landes. “Government is not a business. But maybe we can be more business-like, and use some (entrepreneurial) techniques and ideas and philosophy of the private sector in government.”

Landes, a Republican banker, sponsored legislation enacted in March that creates a pilot entrepreneur-in-residence program. It calls for Virginia's secretary of commerce and trade to bring as many as 10 successful and willing entrepreneurs into state agencies to advise on reaching out to business and curing any government inefficiencies they spot. Volunteers would offer their time and advice free for up to a year, he said, ideally out of a sense of civic duty.

It comes as dozens of cities or counties – from New York City to San Francisco to Arlington County, Virginia – are creating their own entrepreneur-in-residence programs to try to spur business activity or solve civic problems.

Los Angeles Mayor Eric Garcetti earlier this month appointed two veterans of successful computer and manufacturing startups to advise the city on what it can do to “foster ideas to get businesses off the ground and create jobs.” The initiative is underwritten by Ernst & Young, the multinational professional services and accounting firm.

Up the coast, San Francisco Mayor Edwin Lee chose six startup companies in March out of about 200 that had applied to be in the city's new entrepreneurship-in-residence program. They will collaborate with city departments on issues as varied as boosting social engagement with the community to reduce crime and developing new simulation, planning and urban development tools and technologies.

The program's goal, Lee said, is “to explore innovative solutions to civic challenges that can lower costs, increase revenue and enhance productivity.”

Moving the Concept to Government

Government inviting successful entrepreneurs to set up temporary residence is new. But the concept of tapping into their expertise is not. Venture capitalists have turned to them for more than a decade for strategy and to help spot other startups possibly worth investing in. Universities have brought them into their business schools to teach.

Corporate America increasingly has sought them in recent years to help identify and develop possible new products or services, and to help shake up staid thinking.

The chief evangelist for putting them in state government, Ingrid Vanderveldt, comes from Dell, the technology giant, which in 2011 embraced the idea of reaching out to entrepreneurs as part of its strategy to sell its computing services to the business world. Vanderveldt, who had several successful startups of her own, now oversees Dell's $100 million innovators credit fund to help startups finance technology tools, along with Dell's center for entrepreneurs that offers advice to budding businesses.

Her zeal for encouraging entrepreneurship didn't stop at the private sector. Government needed to be involved, too. So two years ago, she worked with Silicon Valley U.S. Rep. Mike Honda, D-Calif., to craft legislation to set up a residency program in the federal government that he introduced with Sen. Mary Landrieu, D-La.

The goal, she said, was to help change a policy and a regulatory climate that entrepreneurs tell her are stumbling blocks to launching new enterprises.

“Dell fundamentally believes that if we're going to get our … economy turned around, it's going to be by entrepreneurs, not big companies,” she said. But, she said, “the regulatory environment is often very, very challenging for them.”

The Kauffman Foundation, which has tracked new business starts since 1996, reported last month that entrepreneurial activity in the nation fell for a second straight year. The rate of new business owners dropped to about 476,000 a month in 2013 from about 514,000 in 2012.

Jared Konczal, senior analyst with the Kansas City, Missouri, foundation, attributes the fall to better job opportunities in an improving economy. As a result, he said, there were fewer “necessity entrepreneurs” who started their own businesses because they couldn't find work elsewhere. 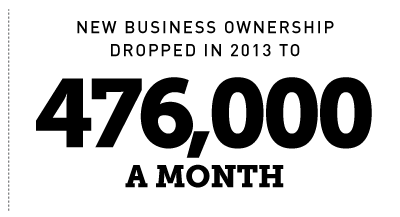 As the federal entrepreneur legislation languished, Vanderveldt turned to state capitals. She began offering lawmakers model legislation shaped from Honda's bill and adaptable to the needs of a particular state. In addition to Austin, Texas, she's been to capitals in Connecticut, Tennessee and California to testify or advocate for it.

The goal, she said, is the same: to bring entrepreneurial thinking “from the outside in” to government agencies to create a better climate for starting a business.

“Entrepreneurs could help with pinpointing any duplicative procedures for obtaining a business license and improving how to inform someone starting out a business about environmental or labor regulations,” she said.

She said another benefit is to instill an entrepreneurial spirit in government to tackle the problems it faces, especially during lean budget times. “If there is any sector of the population who knows how to do more with less, it's startups and business founders,” she said.

Possibly changing the way government does business is what appeals to Assembly member Ian Calderon, who is sponsoring entrepreneur legislation in California.

“I feel like this is an avenue in which to explore the way to get people the (state) services they need and in a more efficient and creative way,” said Calderon, a Democrat.

But will it work? Calderon said he isn't sure. No state program is off the ground yet. And he foresees resistance.

“The agencies aren't going to be receptive at first,” he said. “They'll think it means more work … or they don't want to be told they're doing something wrong or could be doing something else.”

The idea of tapping entrepreneurs has shown signs of success. By enlisting them, the U.S. Citizenship and Immigration Services has developed a new, streamlined path to better inform, advise and adjudicate problems of foreign entrepreneurs seeking to start businesses in the U.S.

But legendary California entrepreneur Steve Blank warned not to expect too much from one or even several successful projects. Entrepreneurs can help accomplish some tasks, he said, such as the Citizenship and Immigration Services did. But they can't instill innovation into the culture of government long term.

“What you really want to do is change the institutional DNA (of government),” he said. “That's the legacy – not just this one sexy project.”

Blank authored “The Four Steps to the Epiphany: Successful Strategies for Products that Win,” which spread the so-called lean concept of starting a business and argued that to succeed, new ventures can't be miniature versions of big companies. He also teaches entrepreneurship at Stanford, California-Berkeley and Columbia universities.

He said one experiment that may work in changing the culture of government has been launched in Philadelphia, where Philadelphia University and the city founded an Academy for Municipal Innovation. Nineteen employees from various city agencies were chosen to attend classes this spring semester to learn principles of innovation and how to act on them on the job

“That's different from bringing in entrepreneurs,” Blank said. “It's teaching people to be entrepreneurs themselves.”