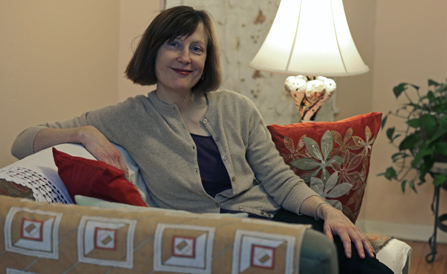 Valerie Spain of Cambridge, Massachusetts, was able to find insurance through the Massachusetts health care law, which was a model for the Affordable Care Act. A recent study found that the death rate in Massachusetts declined as more people gained health insurance. (AP)

The mortality rate in Massachusetts declined substantially in the four years after the state enacted a law in 2006 mandating universal health care coverage, providing the model for the Affordable Care Act.

The authors caution that their conclusions, published in Annals of Internal Medicine, may not apply to all states, and other studies have shown little correlation between having insurance and living longer. Nevertheless, the Harvard study adds to a growing body of evidence that having health insurance increases a person's life expectancy.

Mortality rates – in this case, the number of deaths per 100,000 adults between the ages of 20 and 64 that occur in a given year – vary widely among states. Mississippi, Alabama, West Virginia, Oklahoma, Kentucky and Louisiana have the highest age-adjusted rates (which recognize that some states have older or younger populations). Hawaii, California, Connecticut, Minnesota, New York and Massachusetts have the lowest mortality rates, according to 2010 data (the most recent available) from the U.S. Centers for Disease Control and Prevention (CDC).

Uninsured rates also vary widely. Between 2011 and 2012 Massachusetts had the lowest uninsured rate in the nation at 4 percent of its population, compared to a national average of 15 percent, according to a Kaiser Family Foundation analysis of U.S. Census data. Texas had the highest rate at 25 percent, followed by Nevada (24 percent) and New Mexico and Florida (both 22 percent).

Massachusetts is also among the most affluent states in the nation, and it has one of the highest average education levels and ratios of physicians to residents, all of which lower mortality rates. Many other factors also affect the death rate of a state or regional population, including the prevalence of chronic diseases, obesity, climate and environmental hazards, smoking and drug and alcohol abuse, gun violence and occupational safety.

“It is difficult to compare one state to another when it comes to mortality rates,” said Alison Cuellar, a health economist at George Mason University. “All the evidence points in the direction of health insurance increasing longevity,” she said. “We just don't know the magnitude of the effect.”

In 2002, the Institute of Medicine estimated that the death rate of the uninsured is 25 percent higher than for otherwise similar people who have health insurance. According to the study, 18,000 excess deaths occurred each year because 40 million Americans lacked insurance.

But a 2009 rebuttal study by Richard Kronick of the Health Research and Education Trust found that when adjusted for health status and other factors, the risk of subsequent mortality is no different for people who lack insurance than for those who are covered by employer-sponsored plans. Kronick's conclusion: “There is little evidence to suggest that extending insurance coverage to all adults would have a large effect on the number of deaths in the United States.”

The Harvard researchers compared Massachusetts death rates from 2001 to 2005 to the four-year period after the new health care law was enacted, and found that the mortality rate decreased by 3 percent between 2006 and 2010. Using county-level mortality rates from the CDC, they compared 4 million Massachusetts residents (the entire population from age 20 to 64) to a control group with similar demographics in counties in other New England states.

Greater access to health care may have prevented as many as 320 deaths per year, the authors estimated. Changes were most pronounced in Massachusetts counties with lower household incomes and higher uninsured rates. According to the authors, providing health coverage to 830 uninsured adults prevented one death per year.