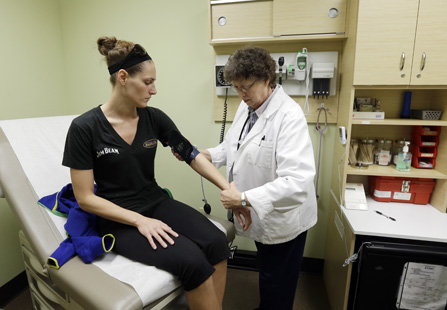 Nurse practitioner Ruth Wiley examines Elizabeth Knowles at a Walgreens clinic in Indianapolis. Walgreens provides a number of preventive health services, many of which are now provided free under the new federal health care law. (AP)

The 13 million Americans who are newly enrolled in health insurance are now eligible for preventive health services, such as screenings and vaccinations, intended to forestall serious and costly illnesses. The cost: free.

Many health policy experts believe this step alone will greatly reduce health disparities for minorities, the poor and the poorly educated. These groups have dominated the ranks of the uninsured, as well as those who went without crucial preventive health services. The calculation now is simple.

“The more folks are insured, the higher the likelihood they will get access to preventive services,” said Roopa Mahadevan, a program officer with the Center for Health Care Strategies.

Policymakers believe there will be an uptick in preventive services for the general population as well since private insurance plans are included in the requirement. But it is the law's impact on health disparities that most excites them.

Last summer, the AARP Public Policy Institute published a report about adults between ages 50 and 64 who use – or don't use – preventive health services. The study, which was in the field from 2010-2011, found that fewer than one out of three midlife adults were up-to-date with recommended preventive services.

In general, AARP found, African-Americans, poor people and those with less education were less likely to have these screenings and more likely to have health risk factors, such as obesity and high blood pressure.

The 13 services now available free were based on recommendations from several federal and nonprofit health-related agencies, including the U.S. Preventive Services Task Force. The services included mammograms and Pap tests, colorectal and cholesterol tests, flu vaccines and screening of patients who are smokers, obese, don't exercise or binge-drink.

A few highlights from the AARP study:

At the state level, AARP found Idaho, Mississippi and Montana tied for the worst record of preventive service use among people ages 50 to 64. Northeast states fared best and Massachusetts ranked first, possibly because of its health care reforms in 2006.

Although it's too early to tell if people are taking advantage of the new preventive health measures, the National Association of Community Health Centers reports there has been an upsurge in demand by patients in some parts of the country, particularly in states that opted to expand Medicaid eligibility.

Health policy experts believe cost and lack of access to care account for most disparities in who receives preventive services. They are hopeful the health care act provisions will reduce the disparities. But Lynda Flowers, a senior adviser at the AARP Public Policy Institute, said it is not a given.

“I think that a lot may be driven by access to care, and the jury is out about whether access will lead to increase use of preventive service,” said Flowers. “Access matters. It is not the whole story, but it matters.”

A famous 2003 report by the Institute of Medicine found that even accounting for differences in income and health insurance status, minorities tended to receive worse health care than did whites.

Other factors aside from health insurance, said Megan Multack, author of the AARP report,  keep people from preventive services, especially those with low incomes. Lack of transportation and an inability to take time for work are frequent obstacles, she said.

Stephen B. Thomas, a professor of health services administration in the School of Public Health and director of the University of Maryland Center for Health Equity , is blunter. “We have structural barriers,” he said. “We have institutional racism in our delivery systems right now.” Medical institutions, he said, must do a better job providing services in the languages of their patients and in employing providers of the same race and ethnicity.

Flowers said preventive health is still something of a stepchild in American medicine. “We are very much a disease-oriented people, and it will take much more education starting with young children to spread a wellness point of view.”

While the AARP study promotes a clinical approach to reducing disparities in preventive care, many other organizations push communitywide health strategies as well.

“Fundamentally, to address disparities in preventive health requires a mix of strategies, some in institutional settings but others focusing on environmental and social conditions,” said Jeremy Cantor, program manager at the Prevention Institute in California.

There are many examples spreading across the country. Cantor pointed to the example of St. John's Well Child and Family Center, a health clinic in a poor area of south Los Angeles. Some years ago, a doctor examined an 18-month-old child who couldn't walk, talk or lift his head. It turned out the boy was suffering from lead poisoning, which, while common in the East, was little understood in California at the time. The discovery led to blood tests of all children under 6 who came to the clinic. More than half had elevated levels of lead in their blood.

That discovery sparked partnerships between St. John's and community organizations in south L.A. focused on eradicating health risks in the older buildings in the neighborhood and also creating more open spaces for recreation and opening grocery stores with fresh fruits and vegetables. All of those efforts are squarely in the realm of disease prevention.

“While everyone focused on expanding enrollment (in health insurance) and controlling costs, there are all these sorts of solutions that could be part of the overall strategy,” said Cantor.

Both Vermont and Oregon are experimenting with projects that link community health centers with communitywide efforts to improve health.

Cantor and others don't underestimate the opportunities that the health care law creates to vastly improve preventive care. It does, however, fail to correct an inconsistency when it comes to their availability.

Although those in the expanded population of Medicaid beneficiaries will receive preventive health services for free, the same is not necessarily true of those previously receiving Medicaid.

The health care law creates a financial incentive to provide preventive services at no cost to previously eligible Medicaid beneficiaries, but final decisions are left to each state as to which services to offer and whether beneficiaries will have to pay some of the costs. It has created a patchwork of different approaches across the country, as described in a Health Affairs article.