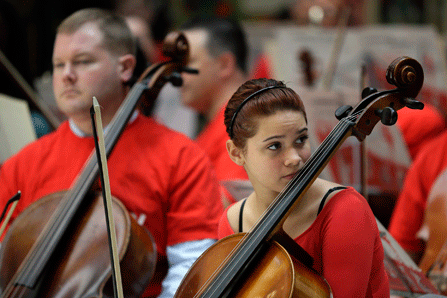 Recent high school graduate Jordan Salguero, right, waits to play in a farewell concert in Philadelphia at the school district's headquarters last June along with music teachers who were slated to lose their jobs. Job prospects for teachers range from dire to great across the country. (AP)

Teachers looking for new jobs for the next school year will find vastly different markets across the states and sometimes across school districts in the same state. Prospects range from dismal to great, even as state revenues recover from the Great Recession and many states invest more money in K-12 education.

In Philadelphia, for example, schools are still struggling after years of cuts in state education funding and shrinking student enrollment.  Superintendent William R. Hite Jr. is threatening to lay off 1,000 staff, including 800 teachers, if the school district does not receive $216 million in supplemental funding for the next school year.

According to the Philadelphia Federation of Teachers, the district has about 8,600 teachers, counselors and librarians. Without the extra cash, class sizes could grow from an average of 33 to 37 students in elementary grades and up to 41 in high school, according to the district.

Federation president Jerry Jordan said the situation “has created a number of dire questions to ponder.”

“How many more students won't reach their full potential because they won't have access to counselors, librarians and other programs and supports; how many children will become needlessly sick – or worse – because there are no nurses available; and how much more can possibly be asked of our teachers and school employees, who have already stretched themselves beyond reasonable limits to educate our children?” Jordan said.

Meanwhile on the West Coast, Oregon schools project hiring some 2,000 teachers this year. This marks the biggest uptick in teacher hiring in years, in part to replace teachers who are retiring. Chuck White, executive director of the Oregon School Personnel Association, said a job fair for teachers and administrators in Portland in April drew 165 school districts, up from 115 last year.

White attributes the growing job market to school districts receiving more funding from the state and to a growing number of people retiring, perhaps because they didn't feel they could during the recession.

“We just hope the trend continues,” White said. “A few years ago, there were no jobs for people to find.”

The Los Angeles Unified School District expects to hire 1,333 teachers for the upcoming school year, up from 718 this year, despite shrinking student enrollment, according to the Los Angeles Times. Some of the new hires will replace retiring or departing teachers.

Clark County in Nevada, one of the biggest school districts in the country, expects to hire 2,000 teachers, which would bring the district's total to nearly 19,000 teachers.  According to the Las Vegas Sun, the district will replace about 1,000 teachers who are expected to resign or retire and hire 700 teachers for new positions and another 300 to expand preschool and kindergarten, with the help of $38.6 million saved in an arbitration ruling following a contract dispute with the teachers' union.

Precise numbers of teacher job openings for the upcoming school year nationwide are hard to come by: Many school districts must approve budgets before knowing how much state aid they will receive, or how many current teachers will either resign or retire, which means budgets are based on estimates. And some school districts will need to add or cut teaching positions due to changes in student enrollment.

According to the Obama administration, 300,000 local education jobs, including teachers, school aides and support staff, were lost between June 2009 and August 2012, contributing to larger class sizes.

Almost every state is now spending more on education than during the recession, according to Mike Griffith, a senior policy analyst with the Education Commission of the States. Many of the increases in state aid since the end of the recession have so far paid for things like increased health care costs and raises for teachers, some of whom have not received raises for four years, Griffith said. The budgets now being passed in state legislatures for the upcoming fiscal year could include enough funding to allow some school districts to start hiring more teachers again, he said. 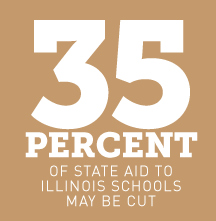 Others are less optimistic. Daniel Thatcher, a senior policy specialist with the National Conference of State Legislatures, said that for many school districts, increases in state aid, which makes up an average of about 46 percent of school district revenue, have not kept pace with inflation, student enrollment growth and other expenses.

“We know that there is a recovery happening,” Thatcher said. “It's not a fantastic recovery. What we have seen is that the increases to state aid have not been sufficient to make up for the lost ground since the beginning of the recession.”

The Boston school district, for instance, is aiming to trim the central office staff of about 700 people by about 100 next year, mainly through attrition, as part of an effort to close a $100 million budget gap, according to district spokesman Lee McGuire. The district also projects to have about 200 fewer teaching positions out of 4,500 next year, through attrition.

“This is the largest budget challenge we've had in the last several years,” McGuire said.

While the city has stepped up its funding for schools, state and federal dollars have not kept up with rising costs, including health care, transportation, cost of living adjustments and teacher salaries. Fifteen years ago, the state provided 31 percent of the school district's revenues; this year, state funds account for only 14 percent of the budget, according to Interim Superintendent John McDonough.

In New York state, state aid to schools has increased every year since 2011-2012, but school districts have also had to live with a property tax cap that took effect in 2012-2103. The cap limits tax increases to the lesser of 2 percent or the inflation rate, also limiting the amount of property tax revenue that goes to schools.

Lowry said small school districts in rural areas, in particular, are having a tough time cutting costs because they start out with small budgets. It's also more difficult for them to consolidate or share services because of the distance between schools and districts.

Juhan Mixon, executive director of the Florida Association of School Administrators, said that with a 2.6 percent increase in state aid expected for the upcoming school year, he does not expect a big boom in teacher hiring.

“That's hardly enough to give a 1 percent raise to the current teachers we've got, much less hire a lot more teachers,” Mixon said.

Florida classrooms are also dealing with a constitutional amendment approved by voters in 2002 limiting class sizes in certain subjects, such as math, science and language arts (18 students in prekindergarten through third grade; 22 students fourth through eighth grades; and 25 students in high school).

While school districts across the states scrambled in the first few years after the amendment to hire teachers to meet the requirements, many have increased class sizes in subjects not covered by the amendment, such as music and art.

In Illinois, school districts are bracing for the outcome of budget negotiations in the legislature. If an income tax increase that is set to expire on Jan. 1 is not extended, state aid to schools could be cut by up to 35 percent, according to Michael Chamness, a spokesman for the Illinois Association of School Administrators. That would follow three years of cuts in general state aid to schools – 5 percent three years ago, 11 percent last year and 11 percent this year.

About two-thirds of school districts in the state have deficits in the current school year, Chamness said, and many are likely preparing to lay off teachers for lack of other options.

“Districts have done all they could not to cut teachers, not to cut programs, but with each succeeding year, all that's left to cut are programs and teachers,” Chamness said.

A few Pennsylvania school districts are just beginning to expand their teaching forces again after years of cuts. Jim Buckheit, executive director of the Pennsylvania Association of School Administrators, estimates school districts have lost about 30,000 teachers, support staff and professional staff over the past three and a half years.

“Certain areas, depending on the financial health of their own district, may be expanding their staff a little, but that's the exception. That's not the rule,” Buckheit said.

Among the big budget questions that have yet to be resolved by the state legislature is how much school districts will need to contribute toward teacher pensions, which could affect hiring.