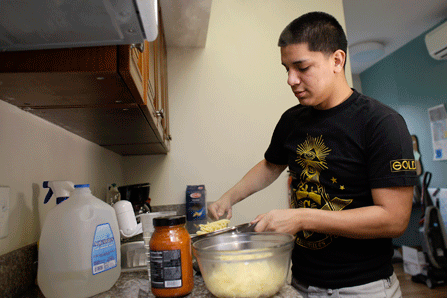 Jose Antonio Machado, 18, cooks pasta at his home in Miami. Machado was placed in a foster home in 2011 when his mother, an unauthorized immigrant, was deported. Nationwide, 26,000 youths are “emancipated” from foster care every year. The Affordable Care Act requires states to provide Medicaid coverage for these former foster youths until their 26th birthday. (AP)

One of the Affordable Care Act's successes is a provision that allows young people up to 26 years old to remain on their parents' health insurance. Under a similar, but less-known provision, young adults who have been recently released from foster care can also get Medicaid coverage, regardless of their incomes. An estimated 180,000 foster care alumni became eligible on Jan. 1.

About 26,000 young adults 18 to 22 years old are released from foster care each year and left to fend for themselves without state protections. The age that a young adult in foster care loses benefits varies across the states. The new health care provision for former young people without parents in the picture grants them full Medicaid coverage until age 26 in the state where they lived when they left foster care.

For states, the trickiest part may be finding these young adults. Only about 20 percent of the nation's roughly 400,000 children in foster care are adopted each year, according to the U.S. Department of Health and Human Services. About 50 percent are reunited with their families. The rest may die, move in with relatives, transfer to an institutional setting or be assigned temporary guardians.

The provision for young adults with parents ran smoothly from the start and was praised by both allies and critics of the Obama administration. More than 6.6 million young adults who likely would not have qualified before the ACA were signed up in the first year of the health care act.

The state-run process for finding and enrolling former foster youths, however, is getting off to a slow start. In fact, most states have no way to measure whether the former foster kids are signing up.

“The states we've heard from have far fewer enrollees than expected,” said Shadi Houshyar, vice president at First Focus, which advocates for children. What should be a straightforward process, she said, has been complicated by a lack of federal guidance. “There's a knowledge gap out there,” Houshyar said. “States need an instruction manual.” 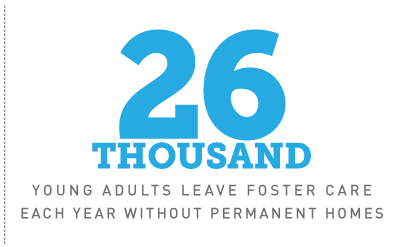 Considering the many other ACA implementation duties, few states have made enrollment of young adults leaving foster care in Medicaid a priority. Their numbers are relatively low.

And former foster youths are among the most in need since they have much higher rates of serious medical and behavioral health problems than the same age group in the rest of the population. They are also more likely to go without health insurance.

Between 35 percent and 60 percent of this population have at least one chronic or acute health condition that needs immediate treatment, and 50 percent to 75 percent have behavioral or social competency issues that may require treatment, according to a report by the Congressional Research Service. Medicaid claims data show that as many as 57 percent of youths in foster care have a mental disorder.

Because of their relatively poor health, foster youths cost Medicaid two to three times as much as other youths enrolled in Medicaid. But not providing Medicaid coverage for former foster kids would be even more expensive for states, a new report from First Focus argues.

As a group, foster alumni relocate frequently to pursue education, find jobs or reunite with family. More than a fifth of them are homeless at least once within a year of leaving foster care, according to the First Focus report.

Once they leave the state child welfare system, tracking them down can be a challenge, said Tricia Brooks, senior fellow at Georgetown University's Center for Children and Families. States need to share best practices on how to locate and enroll these vulnerable young adults, she said.

So far, some of the most effective outreach programs have been conducted by former foster youths who communicate with one another through social networking. In Florida, for example, a group called Florida Youth Shine has done more than any other group to spread the word about how to sign up for the new Medicaid benefits, said Amy K. Guinan, an attorney with Florida Legal Services, which advocates for children.

The Republican-led state has done little to reach out to former foster youth, she said, and for political reasons, lawmakers have dragged their feet over adding the new eligibility category to the state's Medicaid law.

One of the biggest issues for states is whether to extend Medicaid benefits to young adults who were in foster care in other states. Just how many states have decided to offer coverage to out-of-state youths is unknown, but advocates expect few will take the step.

California, considered a leader in implementing the federal law's foster youth provisions, extends coverage to out-of-state young people who say they have been in foster care elsewhere. Instead of requiring documented proof from the applicant, California contacts other states to verify their former foster care status. Pennsylvania and Kentucky have similar policies.

Maryland's foster care statute gives its Medicaid agency the option of granting eligibility to out-of-state foster alumni, if they have documentation. Arizona, Arkansas, Florida, Nebraska, Oregon and Texas have decided not to cover out-of-state foster youths.

Since Medicaid enrollment of former in-state foster youths is mandatory under the health care act, child advocates recommend states sign up current ones before they leave the system. Once they are emancipated, enrollment can automatically be renewed until they reach their 26th birthday.

Maryland's statute requires automatic enrollment of foster youths once they reach age 18, three years before they leave the system in that state. California and a few other states have enacted similar laws.

At least 15 other states already automatically enroll foster youths in Medicaid before they leave the system, under a provision of the Foster Care Independence Act of 1999, according to a 2012 report from HHS. The provision, known as the Chaffee option, allows young adults released from foster care to remain on the Medicaid rolls until they are 21 years old. The new ACA provision would extend that coverage to age 26.

In states that have chosen to expand Medicaid to adults with incomes below 138 percent of the federal poverty level ($16,105 for an individual), the federal government will pay all of the costs for the first three years and gradually reduce its coverage to 90 percent over the following three years. Although many former foster youths have incomes that qualify for expanded Medicaid coverage, the ACA requires states to enroll them in traditional Medicaid programs, which have broader benefits.

In Maryland, former foster youths who were enrolled in the state's limited benefit program for adults were automatically transferred into Medicaid in January 2014, along with everyone else in the program. Since the limited benefit program did not collect data on foster youth status, it is unclear how many have been enrolled, said Leigh Cobb, senior health policy director for Maryland Advocates for Children and Youth.