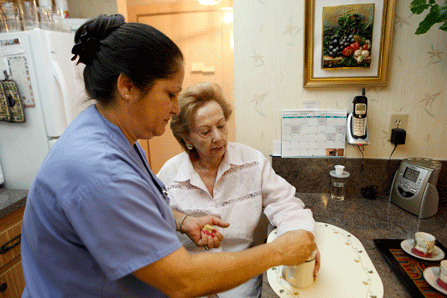 A home health aide, left, makes coffee for her client in Florida. Beginning in 2015, Florida and 28 other states must apply minimum wage and overtime provisions to home health care workers. (AP)

A new rule from the Obama administration designed to provide better pay and working conditions to 2 million home care workers is forcing many states to rethink how they look at Medicaid payments and may result in higher Medicaid costs.

Starting Jan. 1, home care workers in 29 states will, for the first time, be eligible for the federal minimum wage of $7.25 an hour and overtime pay, under a new regulation from the U.S. Department of Labor. These workers go to homes of the elderly and the disabled to help with cooking, bathing and other daily tasks, and are paid by the clients or through Medicaid.

Many states have never considered Medicaid payments to be wages, said Sarah Leberstein, a staff attorney with the National Employment Law Project, which advocates for higher pay for the poor.  “It's a new mindset. The states will have to shift their thinking and take another look at their reimbursement practices and guidelines with the new wage rules in mind.”

In most cases, Medicaid pays home health care agencies to supply health care workers in the homes of beneficiaries who need long term care.  It is the agencies that set workers' hourly rates and the terms of their labor, including overtime and travel time pay. Because of this, Medicaid agencies are usually unaware of direct workers' wages.

The U.S. Department of Labor estimates the rule will cost $6.8 million a year over a 10-year period, with private businesses and state Medicaid programs picking up the tab. But critics contend that number is too low. Supporters say the rule will reduce turnover and improve quality of care while opponents contend that the new rule will force employers to cut home care workers' hours.

Workers in nursing homes, who often do similar work as home care workers, are already covered by federal wage and overtime requirements.  But for the past 40 years, home care workers were exempted from federal minimum wage protections largely because they were lumped in the same job category as babysitting, which Congress said should not be eligible for minimum wage and overtime.

“That's just wrong. In this country, it's inexcusable,” President Barack Obama said in 2011 when he announced the Labor Department would update the regulations.  The final rule was published two years later, but won't go into effect until 2015 to give employers and state Medicaid programs time to understand and adapt to the new requirements.  State Medicaid directors, however, say they will need more time and are asking the Labor Department to delay the effective date by 18 months.

The home care sector is among the fastest growing but not highly paid. Nationwide, the number of home health aides is projected to increase by nearly 50 percent from 2012 to 2022. The median annual wage for home health aides was $20,820 in 2012. Home care workers typically earn $8.50 to $12 an hour, above the federal minimum wage, but until this rule did not get paid overtime.

Medicaid, the federal-state health insurance program for low-income people, is affected by the rule because Medicaid is typically the single largest payer of spending on long-term service, including nursing homes, and home-based care.

In 2009, Medicaid paid more than $126 billion for this kind of care, according to the National Association of Medicaid Directors, a bipartisan group of all 50 state Medicaid directors. While the majority of Medicaid long-term services and support dollars still go toward institutional care, the national percentage of Medicaid spending on home and community-based services has more than doubled from 20 percent in 1995 to 45 percent in 2011. 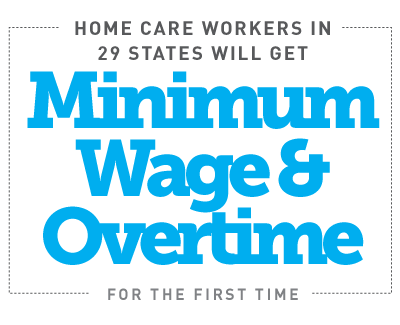 The industry and advocates say most home care workers already earn at least the equivalent of the current federal minimum wage of $7.25. The big difference is that these workers will now be eligible for time-and-a-half pay when they work more than 40 hour a week. These workers also will be compensated for time spent traveling to and from clients' homes.

The new rule does not cover home care workers who are employed solely by household or family members and who primarily provide “fellowship,” which includes reading or playing games with clients or taking them on walks or to social events.

Because the new protections are contained in a regulation, and not a law, the Obama administration didn't have to go through Congress to enact the new policy. Republicans on Capitol Hill have balked at the president's proposal to increase the federal minimum hourly wage to $10.10.

The home care industry has grown dramatically over the last several decades as more Americans choose to receive long-term care at home instead of in nursing homes or other facilities. And the need is expected to grow. The number of Americans requiring help with daily living, either at home or in an institution, is expected to more than double to 27 million by 2050 from the current 12 million.

State Medicaid programs worry about the costs, and also about unintended consequences of the new requirements, such as prompting more seniors and disabled to move into expensive institutional settings because in-home care in no longer a more affordable option.

Some states, such as Connecticut, have backed the new rule. “This federal rule change will ensure nationwide that these hardworking employees enjoy the basic rights that many of their colleagues already do,” Democratic Gov. Dannel Malloy wrote to the Obama administration last year.

Others states are looking at its costs. While the rule was being drafted, Illinois told the Labor Department that 10,000 home health care workers in the state worked close to 3 million hours of overtime, and the cost of overtime compensation would exceed $32 million.

California, which already applies its $8 minimum wage to home care workers, but not overtime, estimates the new overtime requirements will cost the state more than $600 million in 2015-2016.

“It is a proposal that is unfair to hard working, low-wage workers and could create chaos,” said Gary Passmore, vice president of the advocacy group Congress of California Seniors.  “One of the sad ironies of the proposal is that those who will suffer most are those in greatest need … frail people who require the maximum level of assistance to live at home.”

“Make no mistake. Certain provisions of this rule present a heavy lift for some states,” Matt Salo, executive director of the National Association of Medicaid Directors” said earlier this year.  “We expect this to be a lengthy and very involved process as each state works with the administration to assess the type and scope of changes that may be required.”

The U.S. Department of Labor has held a series of webinars with state Medicaid officials and the public to help affected parties know what the requirements are.

Lucy Andrews, vice chair of the National Association for Home Care & Hospice and owner of a small home care company in California, predicts she will either need to restrict her workers' hours or increase what she charges clients, including Medicaid. “This new rule will force me to make some very hard decisions,” she told a U.S. House panel last year.

Joseph Bensmihen, president of United Elder Care Services, Inc., a caregiver referral service in Boca Raton, Fla., said the most likely alternative for most of his clients, besides moving into a facility, will be to rotate caregivers to ensure that none works more than 40 hours a week. “This means that one of the most cherished benefits of home care among the elderly, disabled, and infirm, namely continuity of care, will be lost.”

Supporters question whether firms will have to cut hours, noting that industry-wide, more than half of home care aides already work part time and that less than 10 percent  report working more than 40 hours a week.

“Rising worker compensation costs, higher gas prices, and reimbursement rates that have not kept up with the cost of living are a far greater threat to profitability than paying minimum wage and overtime,"  said Karen Kulp, president of Home Care Associates in Philadelphia, an agency that employs 200 home care workers.

The home care industry, with revenues of $93 billion last year and an average growth rate of 8 percent per year from 2001 to 2011 “is a thriving industry that can afford to pay home care workers minimum wage and overtime,” according to Kulp, who also is a board member of  Paraprofessional Healthcare Institute, a group that aims to improve working conditions for home care workers.

The National Employment Law Project says say the changes in the final rule will “correct a decades-old injustice that has fueled poverty wages and destabilized an increasingly vital industry.”