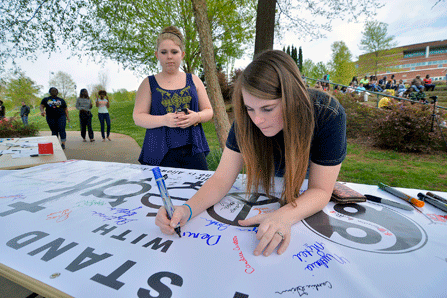 A student from the University of South Carolina Upstate signs a banner protesting the state legislature's proposed funding cut to the university over a gay-themed book assigned to students. Some state lawmakers around the country are brandishing their budget pens to weigh in on what public colleges and universities teach. (AP)

State lawmakers around the country are brandishing their budget pens to penalize public colleges and universities for what they teach, what their professors say and which organizations the schools work with.

In South Carolina, lawmakers are threatening to cut funding from two public colleges where incoming first-year students were asked to read books that discuss homosexuality. After legislators criticized an unrelated symposium on gay and lesbian studies at one of the two universities, the University of South Carolina Upstate earlier this month canceled a comic performance titled “How to Be a Lesbian in 10 Days or Less.” Some lawmakers have pledged to cut even more money from the second institution, the College of Charleston, after it hosted a musical based on the book students were asked to read

Last fall, state lawmakers in Kansas vowed to withhold appropriations from the University of Kansas after journalism professor David Guth tweeted after the Washington Navy Yard shootings: “The blood is on the hands of the #NRA. Next time, let it be YOUR sons and daughters. Shame on you. May God damn you.” Guth later apologized.

Joan Bertin, who heads the National Coalition Against Censorship, said that when state legislators use their financial clout to punish or deter universities, they undermine them as places where a wide range of ideas—including controversial and unpopular ones—can be explored and discussed.

“When state legislatures meddle in purely academic affairs they not only undermine the quality of education but also tread on constitutionally shaky ground,” said Bertin, whose coalition is comprised of 50 artistic, educational and other nonprofit groups. “Curricular decisions must be based on legitimate education grounds, not popularity, politics or personal preferences. The integrity of the education system depends on respect for First Amendment rights and academic freedom, and legislators who truly care about education understand that.”

John Curtis, of the American Association of University Professors, pointed out that while the threatened budget cuts often don't materialize, even the promise of a cut can be intimidating.

“It creates a chilling environment to the idea of academic freedom to think that any time a faculty member is putting a course together that their reading materials might be scrutinized by legislators,” Curtis said.

“Our fundamental principle would be that academics should be the ones to determine the curriculum,” Curtis said. “They're the experts in the field. They know the literature; they're the ones who are interacting with students in a teaching environment.”

In recent months, state legislators also have attempted to exert their control over public colleges in areas beyond the curriculum.

In Michigan, for example, state lawmakers have proposed cutting $500,000 from Michigan State because of its involvement in a series of workshops deemed by critics to advocate unionization.

In New York, Maryland and Illinois, legislation was introduced to bar public universities from sending money to academic organizations that support academic boycotts. The bills came after the American Studies Association voted to boycott Israeli academic institutions to protest Israel's policies toward Palestinians. In New York, the legislation passed in the Senate but was withdrawn in the Assembly. In Illinois, the bill was voted down in a state senate committee and in Maryland, the legislation failed to advance before the end of the last legislative session.

Even after increases in tuition, total educational revenue per student dropped by 6.2 percent from 2008 to 2013, adjusted for inflation, according to the State Higher Education Executive Officers Association. Although state and local funding for higher education inched up by 0.7 percent in 2013, most of the growth came from local, rather than state, sources.

State spending on Michigan State, for example, has declined by 25 percent since 2000-2001, according to Jason Cody, a spokesperson for the university. “Obviously, we value being a public state university and the money we get from the state,” Cody said. “When we're dealing with trying to make a college accessible financially, every dollar counts.”

Last month in South Carolina, the House of Representatives approved a budget that would cut funding for the College of Charleston by $52,000 and for the University of South Carolina Upstate by $17,163, the amount of money the colleges spent on books for first-year students as part of their summer reading programs. The cuts would require approval by the Senate, which has yet to debate the issue.

Incoming freshmen at the College of Charleston were assigned last summer to read “Fun Home” by Alison Bechdel, a graphic memoir about her relationship with her closeted gay father, which was named a finalist for the National Book Critics Circle Award. A musical based on the book was a finalist for the Pulitzer Prize in drama this year.

At the University of South Carolina Upstate, incoming freshmen were asked to read “Out Loud: The Best of Rainbow Radio,” a collection of stories by gays and lesbians from the South that were broadcast on a radio show.

Among those urging the lawmakers to restore the funding are the ACLU of South Carolina, the American Association of University Professors, the National Coalition Against Censorship and the Modern Language Association.

“Academic freedom is more important than any individual reading assignment or College Reads program” said George Benson, president of the College of Charleston, referring to the campus-wide reading program in which all students are encouraged to read the same book to promote discussion. “I will not and we must not permit the legislature or outside groups to tell college faculty what to teach or how to teach it.”

Tom Moore, chancellor at the University of South Carolina Upstate, said he was surprised by the reaction in the legislature.

“We think we're preparing citizens for responsible citizenship and to live authentic lives and that demands that we explore the human condition and enable students to encounter things that they will encounter throughout their lives, or perhaps are dealing with personally,” Moore said. “Apparently, that means that we engage with some subjects that some folks wish we would not engage [with].”

But state Sen. Mike Fair, a Republican, said he believes most of his constituents agree with his view that “the traditional family is to be desired.”

He said that while private colleges should have the freedom to teach what they see fit, public colleges are a different matter.

“In this case they're selling same-sex orientation is a good thing, so tolerate it,” Fair said.

In response to the events, some students at the University of South Carolina Upstate have organized to express support for the university's position.

“If you come to college and you're not presented with these ideas, what's going to happen when you get into the real world?” said Marniqua Tompkins, a senior at the university who co-founded a student group called Speak to respond to the recent events. “We support all kinds of race, religion, sexuality as long as it includes being diverse.”

In Michigan, state Sen. Tonya Schuitmaker has proposed cutting funding for Michigan State University by $500,000 because of the university's involvement with the Building Trades Academy, which provides noncredit courses for union staff. Schuitmaker did not return calls for comment.

Since last year, the university has administered and provided oversight for workshops by the North American Building Trade Union, according to Jason Cody, a Michigan State spokesman. The workshops are held off-campus and not intended for Michigan State students. But the Associated Builders and Contractors of Michigan, a trade organization representing the construction industry, believes the workshops promote unionization, and argues that a public university should not participate in pro-union activities.

Cody emphasized that the program is paid for by the union and does not involve state appropriations or tuition. “We're looking forward to working with lawmakers on language such as this,” he said. “We value all the money we get from the state.”