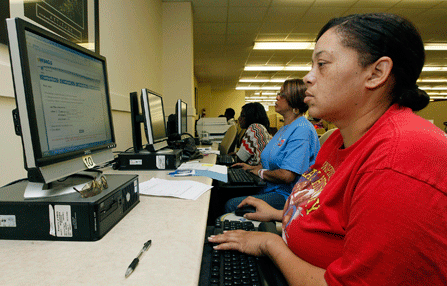 Caroline Reardon hadn't looked for a job in more than a dozen years when she got laid off last year as an administrative assistant with the Boston office of the U.S. Department of Homeland Security.

Nervous and unsure how to start looking, she went to one of Massachusetts' One-Stop Career Centers, where they taught her Excel and other computer skills, tutored her in interview techniques and helped her create different resumes to match different job openings. They even gave her a voucher to get a business suit at a local charity shop and a coupon for a new haircut.

Eight months later, the 48-year-old Quincy resident landed a job  as a medical support assistant at the U.S. Department of Veterans Affairs. She credits the state career counselors for her success. “I brought in flowers. I just can't say enough about them,” Reardon said. “They really (boost) your self-esteem and confidence.”

States are still paying out millions in unemployment insurance benefits as the national jobless rate remains stubbornly high at 6.7 percent, and as high as 8.7 percent in the states. So states are getting personal by offering one-on-one or group counseling and training to help people with the actual mechanics of the modern day job search.

Displaced workers in years past might have needed training in entirely new fields to get jobs, particularly when their lost jobs were in heavy industry. Today, what often separates a job-seeker from an actual job is a command of social media, resume writing and interview techniques -- and states are finding that teaching those simple skills can turn an unemployment compensation recipient into a tax-paying employee.

Yvette Chocolaad, employment and training director for the nonpartisan National Association of State Workforce Agencies, said states save an average of $2 in unemployment benefit payments for every dollar spent on job-search assistance. And that doesn't count the impact of workers who land jobs paying state taxes and boosting the local economy by spending, she said.

“The research shows you get a big bang for your buck with re-employment services,” Chocolaad said. 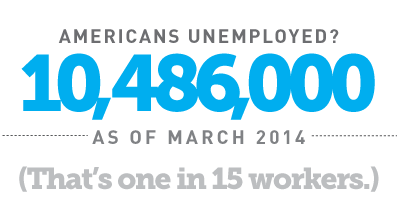 George Wentworth, an analyst with the National Employment Law Project, an employee rights group, said mid-career and older job-seekers face particularly high hurdles – not just because of age discrimination, but because the last time they looked for a job, they may have banged out a boilerplate resume on a manual typewriter and mailed it to companies listed in the classified ad sections of newspapers.

“You get a lot of people, particularly in this last recession, who find themselves out of work for the first or second time in their entire lives, and are 50 or older,” Wentworth said. (The unemployment rate among older workers was 4.7 percent in March.)

But “the way you look for work has changed,” he said, and the current crop of unemployed needs to be schooled in using LinkedIn and other new job-search tools.

Laura Romanelli, 51, a single parent in Cape Cod, said she started looking for a job by “doing the regular old thing, sending out resumes, looking in the paper, online. And nothing – nothing.” A One-Stop Career Center counselor helped Romanelli translate her skills as a psychiatric health care worker to other occupations. This led to a position doing case management at a nonprofit advocacy group – a job she never would have considered herself qualified to do before the One-Stop counselor helped her.

The employment counselors “literally take an analytics approach to these job-seekers,” matching their skills to what's out there and steering clients away from the idea that they are defined by their last job titles, said Rachel Kaprielian, Massachusetts Secretary of Labor and Workforce Development. Mature workers in particular are often self-conscious about their age and benefit from the class on “Using Your Age to Your Advantage,” she said.

Some 236,000 Bay Staters visited one of the 33 career centers last year (it's mandatory for unemployment insurance recipients but open to everyone), Kaprielian said. Half of them found jobs within six months.

States have a financial interest in reducing unemployment, since they shoulder most unemployment insurance costs. Federal and state unemployment compensation cost $68 billion last year, down from a high of $156.3 billion in 2010, according to a report by the Congressional Research Service.

All states are required have One-Stop Career Centers under the federal Workforce Investment Act. The centers, financed by $731 million from the federal government and sometimes supplemented by individual states, are scattered within the states and are supposed to provide self-service options (such as online job listings) and on-site services such as computers and staff help. Services and requirements vary by state.

Experts tout Nevada as having one of the best re-employment approaches, in part because people applying for unemployment insurance are required to have a one-on-one meeting with an employment counselor early on. By connecting the screening process for benefits eligibility to the job-search training program, Nevada reduced the average length of payments from 31.5 weeks to 28.1 weeks, according to a study last year by IMPAQ International researcher Marios Michaelides, who examined the impact of re-employment programs during times of high joblessness. For every dollar spent, the Nevada program yielded more than $4 in benefits savings, he wrote.

Nevada's early intervention is key to its success, said employee rights analyst Wentworth, since the unemployed often tend to “go into a biz of a daze” for a month or two after losing a job, wasting valuable time and putting themselves at greater risk of becoming long-term unemployed (defined as jobless for more than six months).

The U.S. Senate has approved language in an unemployment benefits extension bill that would provide enhanced personal help from job counselors. But the provision, which faces an uphill fight in the House, kicks in only after an individual is out of work for 27 weeks or more, making it less useful, Wentworth said.

And some experts believe these types of job-search help are not enough, arguing that the “skills gap” is the reason why companies have openings but the unemployed can't find jobs.

“For some, (job-search assistance) works. For others, it requires going back and getting occupational skills” they don't have, said Bryan Wilson, state policy director for the National Skills Coalition, a workforce policy group that advocates for more retraining of U.S. workers.

The upfront cost of job training is higher than job-search assistance, Wilson acknowledged, but “if one looks at the return of what comes back in landing jobs and getting higher pay, job training pays for itself with the tax revenues and the new jobs generated."