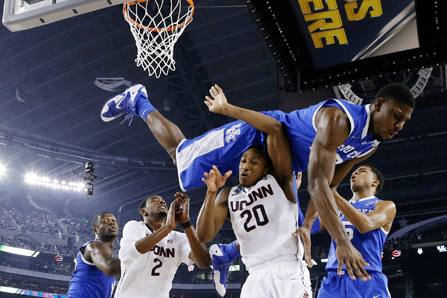 Less than 24 hours after the University of Kentucky men's basketball team beat cross-state rival Louisville to advance to the Sweet 16, Lexington Mayor Jim Gray asked state lawmakers for $80 million to renovate Rupp Arena, the iconic building where the Wildcats play. He didn't get it.

Democratic Gov. Steve Beshear also called on the legislature to pass the arena funding, along with more money for K-12 education, pre-school, transportation, infrastructure and some targeted tax cuts. The tax cuts and education and transportation funds were approved. But the budget passed by the politically divided legislature also cut spending by 5 percent for many state agencies and left others flat. Rupp Arena did not make the cut, though the governor and mayor have pledged to try again next session.

The Kentucky experience illustrates the trade-offs and competing interests facing states with surpluses. Forty-two governors recommended higher spending for fiscal year 2014 than the year before, according to the National Association of State Budget Officers (NASBO). The organization expects budgets to be as large, or larger, in fiscal 2015.

As state revenues continue to recover from the Great Recession, the most pressing question in many state capitols is which cash-starved projects and priorities should get the extra money.

Many states have used it to pay for priorities like education (Arizona, New York) and transportation (Maryland). But some calls for state expenditures were rejected. State government workers in Tennessee, for example, requested a pay raise but didn't get it. Neither did teachers in Alabama.

As long as the cash flow remains positive, states can expect to face pressures about how to use the money. For example:

According to NASBO, Kentucky and many other states have put the emphasis on restoring funding to education this year. A still incomplete survey of states, many of which have not completed their legislative sessions, showed that the vast majority are increasing elementary and secondary education funding, along with transportation and infrastructure, according to Brian Sigritz, director of state fiscal studies at NASBO.

In addition, the states are looking at “any kind of program that can be tied to economic development and job creation,” Sigritz said.

A NASBO survey of governors this year showed that most were proposing spending growth of 1 percent to 5 percent.

“Overall the governors and legislatures are kind of operating in a cautious manner,” Sigritz said. “The fiscal downturn wasn't too long ago, so it's still fresh in their minds.”  Moreover, though revenues are increasing in most states, many still aren't collecting as much money as they were before the Great Recession.

An analysis by The Pew Charitable Trusts (which funds Stateline) found that, after adjusting for inflation, total tax revenue for the 50 states combined finally recovered in mid-2013 from its plunge in the recession.  But the recovery varied widely. Only 20 states were back to their peak levels by the second quarter of 2013. 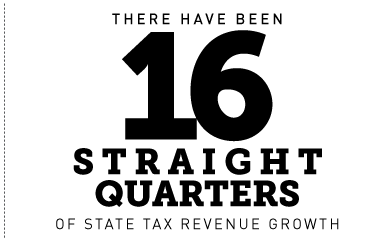 According to data from the Census Bureau, state tax revenue has continued to rebound, showing growth for 16 straight quarters through the end of 2013, which is midway through the fiscal year in most states. Tax revenue in each quarter was higher than the same quarter of the previous year.

Caution is what led California, for example, to call a special legislative session beginning Thursday to discuss enhancing the state's rainy day fund.

“We simply must prevent the massive deficits of the last decade and we can only do that by paying down our debts and creating a solid rainy day fund,” Democratic Gov. Jerry Brown said.

Californians are scheduled to vote on a rainy day fund proposal on the November ballot, but Brown wants to make changes. Brown said the ballot measure does not address the volatility of the revenue stream in the state, does not provide a reserve for schools and limits the state's ability to pay down long-term liabilities.

The volatility of revenue streams is on many states' minds, according to NASBO's Sigritz.

But that hasn't stopped lawmakers from scrambling to get funding for pet projects.

In Florida, for example, the House and Senate each have approved budgets that would spend some of the state's $1.2 billion surplus on promoting tourism – an economic mainstay for the vacation mecca.  The House version of the budget included $71.3 million for “VisitFlorida,” the state's tourism promotion entity. The Senate budget gave the agency $75 million. Both proposals are less than the $100 million Republican Gov. Rick Scott proposed, but still a big boost.

“We are seeing signs of economic recovery,” said Senate Appropriations Chairman Seth McKeel, a Republican. The funding for tourism will certainly be included in the final budget at some level, he said. “We're sorting out the details.”

As for the rest of the surplus, Florida lawmakers are jockeying for dollars for a variety of projects. An analysis by The Associated Press found that legislators were seeking money for everything from gun ranges and a military museum to a sexual abstinence course for teenagers. The paper found $10 million for SkyRise Miami, a building that would be the city's tallest, some $500,000 for a livestock pavilion in Ocala and a request to move a lighthouse at Cape San Blas in the Panhandle.

McKeel said such requests are to be expected. “Obviously, folks know there's a little bit more money in the budget this year. They also know we've allocated large amounts of money to tax relief and economic development so the availability of money is less than they think it is,” he said.

Some Democrats charge that Republicans are getting more of their budget wishes filled, but Florida Rep. Michelle Rehwinkel Vasilinda, a Democrat, said, “That's politics. My colleagues are in the majority party. If it were switched, the Democrats would get more.”

Vasilinda had requested funds for two colleges in her legislative district, Florida State and the Florida Agricultural and Mechanical University. So far, those requests have not been included in either the House or Senate budget. But she remains hopeful because a similar request for a different university last year was slipped into the budget during the conference committee at the last minute. “It is a very organic process until the end,” she said.