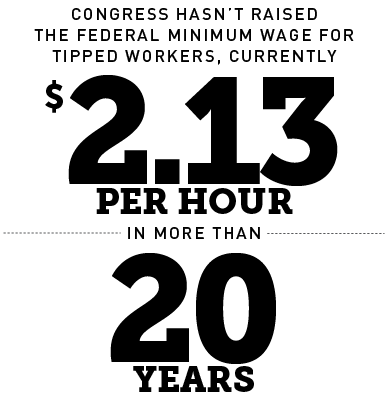 Waiters, bartenders, hairdressers and other Minnesota workers who rely on tips got a big raise last week when the state guaranteed them the same $9.50 hourly minimum wage that other workers will get.

Minnesota is one of five states (along with Connecticut, Delaware, Maryland and West Virginia) plus the District of Columbia to increase its hourly wage floor this year, and in four of them tipped workers also will get a raise, reflecting concern for a category of workers who are often overlooked. Of the 3.3 million workers who rely primarily on tips, about 2 million are waiters and waitresses, according to a recent White House report.

“Tipped workers have been taking it on the chin in all too many states,” U.S. Secretary of Labor Thomas Perez told a House panel last month.

Minnesota did not have to enact a separate increase for tipped workers, since it is one of seven states (Alaska, California, Montana, Nevada, Oregon and Washington are the others) that require employers to pay all workers the same state minimum wage, whether they receive tips or not.

In D.C., which will raise its overall minimum wage to $11.50, the minimum wage for tipped workers will remain at the current $2.77 an hour. However, D.C. employers now will have to prove their workers earn at least the minimum wage through tips, and provide the difference if not.

Jack Temple, a policy analyst with the National Employment Law Project, said the resistance to raising the minimum wage for tipped workers in Maryland may be a sign of things to come.  "This is a trend that we're starting to see across the country," Temple said. "The restaurant industry is demanding that the tipped wage remain frozen in exchange for any increase in the full minimum wage."

Congress hasn't raised the federal minimum for tipped workers, currently $2.13, in more than 20 years.  However, if a worker's wages and tips do not equal the federal minimum wage during a given pay period, the employer is required to make up the difference. 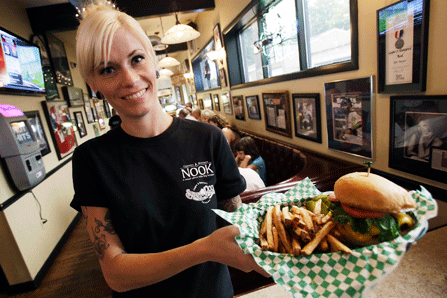 As Stateline has reported, the stalled action in Congress has prompted states to raise their own minimum wage standards. This year 29 states are considering raising their minimum wage, in addition to the five states plus D.C. that already have done so, according to the National Conference of State Legislatures.

Before Minnesota this month increased its minimum wage to $9.50, the state required large employers with annual receipts of $625,000 or more to pay workers at least $6.15 an hour and smaller employers to pay at least $5.25 an hour.  Minnesota was one of only four states in the country with a minimum wage below the national rate of $7.25 per hour.

But even under the old rules, only 4.2 percent of Minnesota workers were earning at or below the federal minimum, about the same as the national average of 4.3 percent, according to federal data. Tennessee has the highest percentage of workers earning the federal minimum or below, at 7.4 percent.

While Minnesota Gov. Mark Dayton, a Democrat, hailed the state's first minimum wage increase in a decade, business groups lamented it. The Minnesota Restaurant Association said that a higher minimum wage that doesn't recognize tips as income would mean higher prices for customers, fewer hours of work for employees or would delay improvements or expansion. “It would hurt the very employees it is designed to help,” according to the group.

Mike Hickey, who heads the Minnesota chapter of the National Federation of Independent Business, said the new minimum wage law “makes Minnesota less attractive as a place to start and run a business.”

Currently, tipped workers earn the most in Washington state, which has the highest state minimum wage at $9.32, followed by Oregon at $9.10. California's current hourly rate of $8 will increase to $9 an hour this July 1, and then jump again to $10 an hour on Jan. 1, 2016, under legislation enacted last year.  All three of those states are among those that apply the minimum wage to tipped workers without including tips.

Thirty-one states and the District of Columbia require employers to pay tipped workers an hourly wage that exceeds the federal tipped minimum of $2.13.

A Federal Raise for Tipped Workers

Each side points to data to make its case—but the numbers conflict.  Advocates for an increase say the median hourly wage for restaurant servers including tips is just $8.92, while the restaurant industry says the median hourly earnings for servers range from $16 to $22.

Supporters of a higher wage point to a 2011 study from the Economic Policy Institute, a left-leaning think tank in Washington, D.C., showing tipped workers are more than twice as likely to fall below the federal poverty line and three times as likely to rely on food stamps as the average worker.

That's largely because while employers are required by law to make up the difference to ensure tipped workers make at least the minimum wage, many don't, advocates say. Tips also are unreliable and unpredictable, said the National Employment Law Project, which also supports a higher rate.

But businesses and the restaurant industry point to a 2011 study which found that a 10 percent increase in the cash wage reduced the hours worked by tipped employees by about 5 percent.

Labor Secretary Perez rejected the notion that a higher tipped wage would hurt workers or businesses.  “I've hardly seen a diminution in the restaurant industry [in those states without tipped wages] there because it's a level playing field,” he said.