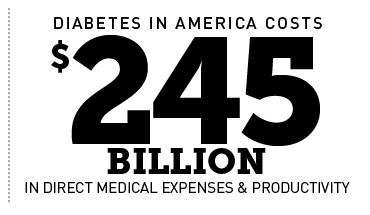 Diabetes afflicts more than 22 million Americans, or 7 percent of the total population, and the number of people diagnosed every year is skyrocketing.

At a cost of $245 billion in 2012, the disease's toll on the economy has increased by more than 40 percent since 2007, according to a recent report from the American Diabetes Association.

Mississippi, which ranks second after West Virginia in the percentage of residents affected by the chronic disease, is taking steps to reduce devastating effects on the state economy and the overall health of Mississippians. Nearly 9 percent of Mississippians were diagnosed in 2012 with diabetes, and the $2.7 billion annual cost of diabetes represents nearly 3 percent of the state's economy (gross state product).

In January, Republican Gov. Phil Bryant, the University of Mississippi Medical Center and three private technology partners announced a plan to help low-income residents manage their diabetes remotely through the use of telemedicine. The goal is to help them keep the disease in check and avoid unnecessary hospitalizations while remaining as active and productive as possible.

“This revolutionary telehealth effort,” Bryant said, “will deliver top-notch medical care to patients in one of Mississippi's most medically underserved areas, providing a new lifeline for health and disease management.”

To make the project possible, Bryant signed a first-of-its-kind law, enacted in March, requiring private insurers, Medicaid and state employee health plans to reimburse medical providers for services dispensed via computer screens and telecommunications at the same rate they would pay for in-person medical care.

The diabetes disease management services offered in the telemedicine project will be free to the poor uninsured participants. But under the new law, the costs of remote monitoring of other participants with insurance coverage or Medicaid will be reimbursed.

As part of the project, health workers will help uninsured participants sign up for coverage. Mississippi has not expanded Medicaid to more low-income adults under the Affordable Care Act, but some participants may qualify for traditional Medicaid or premium tax credits. 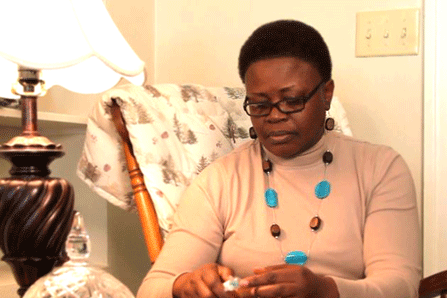 A volunteer demonstrates the technology and blood-glucose monitoring methods that participants will use in a new telemedicine program designed to reduce the devastating effects of diabetes on Mississippi's economy and on the overall health of residents. (Photo courtesy of North Sunflower Medical Center)

The new reimbursement law will also pave the way for similar telemedicine projects for other chronic diseases, said Dr. Kristi Henderson, the University of Mississippi Medical Center's chief of telemedicine, who is heading the project. The diabetes project will run 18 months and interim results will be released during its course. Henderson said her group plans to use the results to explore ways to remotely help people manage other chronic diseases such as asthma and congestive heart failure.

So far, 20 states and the District of Columbia have required private insurers to pay for some telemedicine services. In addition, most states pay for certain services through Medicaid. But until Mississippi enacted its law, no state had required parity from all insurers for all types of telemedicine services. Tennessee just passed a similar law this month, Capistrant said.

Starting in June, 200 people with diabetes in one of the state's poorest regions, the Mississippi Delta, will be given Internet-capable computer tablets loaded with software provided by Intel-GE Care Innovations and GE Healthcare. The software will enable medical professionals at the University of Mississippi and a hospital in the region, North Sunflower Medical Center, to remotely monitor patients' test results and symptoms. A third technology partner – C Spire  – will provide technical support for the wireless telecommunications services needed to transmit the medical data.

According to Henderson, local clinicians in Sunflower County are choosing diabetes patients who are the sickest in the community. The idea is to show that even patients with the least-controlled diseases can see improved health outcomes with careful monitoring.

Each patient will be given a baseline exam and a treatment program, which will require them to check glucose levels two to four times daily using a home-testing kit. The results will be transmitted to medical teams at both hospitals using Bluetooth technology. Patients will also check their weight and blood pressure daily and transmit the information.

At the University of Mississippi, the medical team will include a dietician, a pharmacist, an ophthalmologist, an endocrinologist, a diabetes education expert and a nurse practitioner, who will work with local medical providers at Sunflower Medical Center to provide a full range of specialty care for patients as needed.

“My staff will be monitoring their progress constantly,” Henderson said. They'll know immediately if there is a deviation in the patient's blood sugar levels and can recommend either a change in diet or medication.

“It's part of Southern culture,” Henderson said, “for patients to not want to bother their provider unless there is a real problem.” By proactively monitoring blood sugar levels and other vital signs, doctors will be able to react before a patient is having more serious problems, she said.

Even if there are no unusual fluctuations in a patient's vital signs, a member of the team will consult with patients daily using video teleconferencing to make sure they are making the lifestyle changes needed to improve their conditions.

In Mississippi, as well as the rest of the country, the incidence of diabetes increases with age and occurs most frequently among the black population. More than 70,000 deaths are attributed to diabetes each year, and the chronic disease is a contributing factor in 231,000 deaths, according to the American Diabetes Association.

Diagnoses of diabetes in the U.S. increased by 128 percent between 1988 and 2008. As many as one in three adults will have diabetes in 2050 if present trends continue.

The extra medical costs incurred during the life of a diabetes patient include hospital and nursing home care as well as outpatient services and medications.  On average, the health care costs of a person with diabetes are 2.3 times higher than without the disease. Indirect costs of the disease include loss of work, disability and premature death.

Nationwide, one in every five health care dollars is spent caring for people with diabetes, according to the American Diabetes Association.

The price tag for Mississippi's telemedicine project, which includes donations of university staff time and medical technology, is about $1.6 million. But to expand the program or recreate it somewhere else, Henderson said, would cost much less because the groundwork would be done. “We want to prove a model and replicate it.”

Numerous states and medical groups already have expressed an interest in the project, Henderson said.  “If we can do it in Mississippi, where chronic disease is at its worst, where poverty is at its worst, and where transportation and workforce issue are at their worst, we can make it work anywhere.”