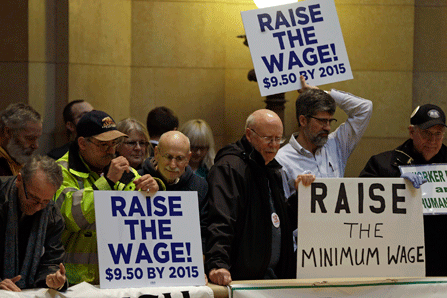 Demonstrators rally at the state Capitol in St. Paul, Minn., calling for lawmakers to raise the minimum wage. In April, Minnesota became the fifth state to do so this year. (AP)

A wave of efforts to raise the minimum wage at the state and local level will run through November, when voters in eight states could consider ballot measures to raise hourly rates higher than the current $7.25 federal rate.

This is the second year in a row that states have picked up the pace of increasing the minimum wage, after President Barack Obama's proposal to increase the federal rate to $10.10 an hour stalled in Congress.

When these measures go into effect next year, half the states will have minimum wage rates higher than the federal level.

The last time this many states had rates higher than the federal level was in 2007, when 23 states and the District of Columbia were higher. That year, Congress raised the minimum wage from $5.15 to $7.25 an hour, in three stages over two years.

“This has not happened often, primarily because prior to the 1990s, most states just used the federal minimum,” said David Cooper, an analyst with the Economic Policy Institute, a labor-backed organization that supports a higher minimum wage. Some of the increases at the state level in 2007 spurred momentum for the federal increase, he said.

So far this year, 34 states have or are now considering increases to their minimum wage, according to the National Conference of State Legislatures' database. Measures are still advancing in Hawaii, Illinois, Massachusetts and Vermont.

Tennessee and Idaho had the highest percentages of hourly paid workers earning at or below the federal minimum wage in 2013, according to federal figures (see sidebar). Washington, California and Oregon have the lowest percentages of workers paid at the federal rate, largely because these three states have the country's highest rates.

Of all states, Washington state currently has the highest state minimum wage at $9.32, followed by Oregon at $9.10. California's rate of $8 an hour will increase to $9 on July 1 and then jump again to $10 an hour on Jan. 1, 2016, under legislation enacted last year.

Obama has moved his campaign for a higher minimum wage beyond the halls of Congress, where he first made the pitch in his 2013 State of the Union. “States, counties, cities across the country are working to raise their minimum wage as we speak,” the president said in March at an event with four Democratic New England governors, a sentiment he repeated in remarks in Michigan this month.

The states that have passed minimum wage increases this year are dominated by Democratic governors and legislatures. The same was true last year, too, when California, New York and Rhode Island increased their minimums.

States controlled by Republicans could see action, too.  Organizers are trying to get measures on the November's ballot to raise the minimum wage in the GOP-dominated states of Alaska, Idaho, Michigan and South Dakota. Supporters in Nebraska are likewise weighing a ballot measure since the minimum wage effort died in the legislature, which is officially nonpartisan.

States with split political control where minimum wage ballot proposals are circulating include Arkansas and Missouri, where the governors are Democrats and the legislatures are GOP-led. Efforts also are underway in the blue state of Massachusetts to put a measure to voters if the legislature fails to raise the minimum wage.

Minimum wage hikes have been popular with voters: Since 1996, proposed increases have been on statewide ballots 15 times in 11 states— and all but two of them were successful, according to the Ballot Initiative Strategy Center, a Washington, D.C., group that supports a higher wage.

In the past, minimum wage measures on the ballot during a nonpresidential election year have increased turnout among Democrats and swing voters, said Josh Levin, the center's vice president. That's one reason Democrats are expected to keep the issue alive for the November midterm elections, when 36 governorships and legislative seats in 46 statehouses will be contested, along with all 435 U.S. House seats.

Mike Saltsman, a research director at the Employment Policies Institute, a conservative nonprofit think tank that opposes a minimum wage increase, said Democrats want voters to think about the minimum wage, and not the Affordable Care Act. “They are trying to change the conversation away from Obamacare,” he said.

In some states where minimum wage measures faltered, cities are responding. Portland, Maine, and Las Cruces, N.M., are considering higher hourly wages, in part, because Republican governors in those states last year vetoed measures to increase the state minimum wage.

Even if the state has recently raised its minimum wage, the cost of living is so high in some cities that the new minimum wage isn't enough to live on, resulting in city campaigns, said Paul Sonn, general counsel at the National Employment Law Project, an advocacy group that supports higher wages. Some 120 cities have enacted “living wages” that set a minimum standard for businesses that receive city contracts. City minimums range from $9 to $16 an hour.

Cities in California have increased or are considering high wage rates. Last month in Richmond, some 15 miles northeast of San Francisco, the city council approved raising the local minimum wage to $12.30 by 2017. Other recent increases in California include San Francisco ($10.74 per hour) and San Jose ($10.15 per hour). City campaigns are underway again in San Francisco as well as San Diego, Oakland and Davis.

In Washington state, SeaTac, a suburb of Seattle, has the country's highest minimum at $15 an hour. It specifically applies to about 1,600 workers in certain airport businesses, including rental cars and parking lots, but a judge ruled in December that the law does not cover another 4,700 airport workers.

Exactly who earns the minimum wage and who would benefit the most from an increase is widely debated. BLS data show:

Politicians and advocates spin the data to fit their arguments. Opponents of increasing the minimum wage say that most people who would benefit from a higher minimum wage are teenagers on their first job. Advocates for a higher rate, including the president, contend the average age of folks paid the minimum wage is 35 and a majority of lower-wage jobs are held by women.

Obama and other proponents of a higher federal minimum wage argue that companies are making record profits while the lowest-paid workers have seen their purchasing power plummet as the real value of the minimum wage has dropped by nearly one-third since its peak in 1968.

Opponents, including Republican House Speaker John Boehner, the restaurant industry and many business groups, argue that employers can't afford the higher hourly wages. Most businesses that hire minimum wage workers are not big corporations, they say, but rather independently owned franchises and small businesses that operate on narrow profit margins.

Nearly 40 percent of business owners who currently pay the minimum wage said they would have to let some employees go to cover the cost of any wage increases, according to a March survey by staffing company Express Employment Professionals.

The nonpartisan Congressional Budget Office concluded that a federal $10.10 hourly rate would reduce total employment by about 500,000 workers.