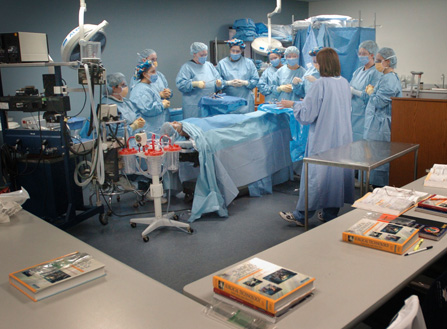 Students in a surgical technology class in a mock operating room at for-profit Indiana Business College in Fort Wayne, Ind. A growing number of states are taking actions to regulate for-profit colleges and the student loan industry. (AP)

When Murray Hastie returned to New York in January 2006 after two tours of duty in Iraq, he hoped to use the GI Bill to complete his college education.

Denied admission to two state colleges, Hastie came upon DeVry University. The day after he filled out an online request for information, a representative from the for-profit university visited him at his home and encouraged him to enroll in a biomedical informatics program in New Jersey.

DeVry said he would receive in-state tuition and that his GI benefits would cover all of his educational costs, and helped him apply for loans, Hastie said.

Three semesters into the program, Hastie was struggling. He was being taught to write computer code, not preparing to work in a research lab, which is what he had been told he would be doing. Meanwhile, he was increasingly worried about his mounting debt. By the time he decided to cut his losses and move back home, Hastie had racked up more than $90,000 in student loans—with no degree to show for it.

Inundated by stories such as Hastie's, a number of states are working to protect college students as consumers, even as the federal government plays a more important role in regulating both for-profit colleges and the student loan industry.

Thirty-two states are now working together under the leadership of Kentucky Attorney General Jack Conway to investigate potential abuses in the for-profit college industry, which saw enrollment more than triple between 1998 and 2008, according to the Consumer Finance Protection Bureau.

One reason for the concern is the amount of taxpayer dollars involved: Some for-profit colleges receive 90 percent or more of their revenue from the federal and/or state governments in the form of student aid.

“While some for-profit schools offer quality training and legitimate diplomas, we have found that this industry often markets subpar programs to veterans and low-income students who depend on federal aid,” Massachusetts Attorney General Martha Coakley said. “When students don't receive the training they sign up for, or default on their loans, it not only greatly impacts their future but it also impacts taxpayers who have backed these loans in the first place.”

“We're approaching them with a view toward transparency and an interest in demonstrating the compliant nature of our practices,” said Ernest Gibble, a spokesman for DeVry, on the investigations. DeVry declined to comment on Hastie's particular situation, citing federal privacy restrictions.

Coakley also has taken aim at for-profit Corinthian Colleges and Corinthian Schools, with more than 100 schools nationwide.  In a lawsuit filed earlier this month, she alleges Corinthian used deceptive marketing and high-pressure tactics to persuade students to enroll and take out high-interest subprime loans.

According to the complaint, Corinthian misrepresented the job placement rate of its graduates and misled students about the salaries they could expect after completing their programs. The lawsuit also alleges that Corinthian encouraged students to take out subprime loans with interest rates of up to 18 percent.

In disputing the allegations, Corinthian said Coakley's office “disregards substantial, independent evidence that our two schools in Massachusetts have a strong record of offering students a quality education and treating them honestly and fairly.”

“There's no doubt that more needs to be done by both states and the federal government as well as the accreditors to protect both students' and taxpayers' interests,” said Pauline Abernathy, vice president of The Institute for College Access and Success, a nonprofit based in Oakland, Calif., which aims to make higher education more available and affordable.

In January, 13 states issued subpoenas to four for-profit colleges, including Corinthian, over concerns about possible misrepresentations to students about financing, recruitment practices and graduates' employment rates.

Also in January, Coakley's office in Massachusetts held hearings on proposed regulations for for-profit colleges and occupational schools. The rules would require schools to disclose accurate information about tuition and fees along with placement statistics and graduation rates; prohibit them from using high-pressure sales tactics such as repeated phone calls and text messages; and bar them from calling recruitment personnel “counselors” or “advisers.”

Previously, Conway led an effort involving attorneys general in 20 states, which resulted in a $2.5 million settlement in 2012 with QuinStreet, which operated a website, www.GIBill.com, that aimed to recruit veterans to attend for-profit colleges. The states alleged the website gave the false impression that it was affiliated with the federal government. QuinStreet settled, but denied wrongdoing. Under the settlement, the domain name was transferred to the U.S. Department of Veterans Affairs.

At the federal level, U.S. Sen. Dick Durbin of Illinois and Sen. Tom Harkin of Iowa, both Democrats, introduced legislation earlier this month designed to improve coordination among federal agencies overseeing for-profit colleges. Their proposal would establish a committee with representatives from federal entities including the Department of Education, Department of Justice, Securities and Exchange Commission and CFPB.

Student loan debt is now the largest form of consumer debt outside of mortgages, eclipsing car loans and credit cards, according to the Federal Reserve Bank of New York. Nationwide, about 38 million people owe nearly $1.2 trillion in student loans, more than double from $550 billion in late 2007.  Of those, 7 million borrowers are in default.

Private student loans often lack the consumer protections of federal or federally-backed loans, such as flexible repayment plans and unemployment deferments, which means students can be left with overwhelming debt and, in some cases, little education to show for it. According to the Department of Education, 72 percent of for-profit college programs produced graduates who earned less, on average, than high school dropouts, compared to 32 percent of public non-profit programs.

“Unfortunately, for many of these borrowers, they are unable to complete their educations or the school closes and they are left with no jobs and a mountain of debt that bankruptcy experts tell us is almost impossible to discharge,” Conway said in 2012 congressional testimony.

The Department of Education in March proposed new “gainful employment” rules which would require for-profit colleges that benefit from federal student aid to meet certain standards relating to student debt and income.

California was the first state in the nation to require for-profit colleges to meet standards beyond those required by the federal government for its grants and loans, passing a law in 2011 prohibiting schools with high borrowing and default rates from receiving Cal Grant funds. In 2012, the state further tightened standards for institutions, eliminating 154 schools from receiving Cal Grant funds.

In January, New York state's Student Protection Unit issued subpoenas to 13 student debt relief companies as part of its investigation into whether the companies might be charging improper fees to enroll students in debt relief programs that are already available free through the federal government.

Today, Hastie, 31, is on his way to a new life – he completed an associate's degree at a community college in New York, got married and had a baby. He is working in a deli and volunteering as an EMT and a firefighter after taking a civil service exam to become a firefighter.

But Hastie worries about the day, in August, when he will have to begin paying back his loans.

“I don't even want to think about it,” Hastie said.