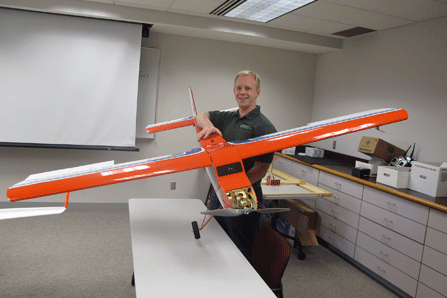 University of North Dakota aviation student Logan Lass lifts a lightweight drone used in training at the school's unmanned aircraft program. North Dakota has no laws governing drones; other states are trying to regulate them. (AP)

Most states are wrestling with how to restrict the nascent domestic drone industry. North Dakota is embracing it.

North Dakota police don't need a warrant to use drones—in fact, the state does not have any drone laws at all. North Dakota lobbied to be a drone test site for the federal government, and was one of six sites chosen in December by the Federal Aviation Administration to research how to integrate them into the national airspace. (The others are in Alaska, Nevada, New York, Texas and Virginia.)

But North Dakota is the exception. So far this year, 35 states have considered bills and resolutions regarding unmanned aerial vehicles, commonly known as drones. Most of them are privacy protection measures that would restrict the use of drones and set limits on the collection and storage of data.

In just the last two weeks:

Washington Gov. Jay Inslee, a Democrat, vetoed a bill that would have regulated drone use by government and law enforcement. He said the legislation didn't go far enough to protect privacy rights, although it had been endorsed by the American Civil Liberties Union and law enforcement agencies.

“I'm very concerned about the effect of this new technology on our citizens' right to privacy,” Inslee said. “People have a desire not to see drones parked outside their kitchen window by any public agency.”

In Utah, Republican Gov. Gary Herbert signed a bill that sets limits on law enforcement use of drone technology. The law requires law officers to obtain a search warrant before using a drone in most situations. It would also regulate what kinds of data can be collected and how long it can be stored, and it requires the data to be made public after an investigation is over.

In Wisconsin, the legislature passed a bill that requires law enforcement to obtain a warrant before using drones except in emergency situations, and outlaws drone surveillance of people who have a reasonable expectation of privacy. Republican Gov. Scott Walker signed the bill Tuesday.

One sponsor said the bill struck a balance between privacy rights and public safety. “It is important that our laws advance as technology progresses. Even inexpensive drone technology is capable of capturing high-resolution pictures of people's homes and areas we consider most private and worthy of protection,” Republican Sen. Jerry Petrowski said.

He said the legislation was written so it does not cut off commercial development related to drones.

North Dakota is well-positioned to move quickly into the industry because of its long-standing aerospace school at the University of North Dakota. The university's traditional focus on training airline pilots has expanded to training students to operate drones. It was the first university to offer a degree in this field; 50 students have graduated and another 100 are enrolled in the program.

In a partnership with the university, the Grand Forks sheriff and police departments are already using drones in the northeastern quarter of the state.

Instead of the legal limits many other states have, drone flights in North Dakota are overseen by Alan Frazier, a UND associate professor in charge of the Law Enforcement Unmanned Aircraft Systems Research Project. Frazier, who is also a Grand Forks deputy sheriff, was a police officer for 28 years in Glendale, Calif., where he was in charge of a police air support unit. As a pilot, he has more than 6,000 hours of flying time.

Frazier reports to a university compliance panel that specified five situations in which drones may be used: to search for lost people; perform post-disaster assessments; photograph crime and accident scenes; search for crime suspects who pose a risk to public safety; and assist with traffic control at major events.

When a request comes in, Frazier gets FAA authorization for the flight. Then Frazier or another trained operator launches one of four small drones built by manufacturers AeroVironment and Draganfly Innovations Inc., to aid law enforcement. Frazier trains the pilots, tests the drones during actual incidents and later assesses the effectiveness for the FAA and the two manufacturers. The information will help guide the FAA and the manufacturers as they make decisions about domestic drones, as well as lend a hand to local law enforcement officers in developing rules to govern drone use.

The drones are leased to law enforcement for $1 a year; Grand Forks County Sheriff Bob Rost said the services are essentially free. The $11,000 project is funded by grants and donations so there is no cost to the university.

The Association of Unmanned Vehicle Systems International, a trade group for the drone industry, says the cost of a small UAV is less than $50,000, or about the price of a patrol car. It estimates operating costs at $25 to $75 an hour, compared to $200 to $400 per hour for a police helicopter.

Since May 2013, nine missions have been flown in northeastern North Dakota. Examples range from the mundane to the dramatic: Drones helped search a flooded river for drowning victims, photographed a train collision, photographed river bank erosion and damage to historic buildings, helped search for two suspects accused of auto theft and child molestation and took photos of an outdoor murder scene.

Last month, FAA gave the partnership the first-in-the-nation authorization to use drones at night. “A lot of significant crime activity occurs at night,” Frazier said. “Now this allows us to respond to incidents, whether it be a search or disaster assessment or a crime scene at night.”

Frazier doesn't see a need for warrants to fly drones. “Drones don't do anything that aircraft can't already do. It's not a drone concern – it's an information technology concern. The real concern is what's happening with that data,” he said. Two key issues are how long the data is retained and who has access to it. (UND does not retain drone images; the law agencies retain essential images as evidence)

The ACLU shares that concern. The organization supports the warrant requirements that are being put into place in some states, including Utah, Indiana and Wisconsin this year, but it is also focusing on what happens to the data collected.

“The trick is, we need a system of rules to ensure we can enjoy the benefits of drone technology without becoming a surveillance society,” said Allie Bohm, advocacy and policy strategist for the ACLU. “We want to prohibit drones for massive surveillance and still allow law enforcement to use them in cases of wrongdoing.”

Bohm said state economic development agencies don't want privacy protections because they fear it will hold back the drone industry and cost jobs. “Putting a system of rules into place is really important and ultimately will benefit the industry” because abuses and public outcry will be avoided.

“Putting privacy protections in place assuages a lot of public concern and creates space for the industry to go forward … Most of the bills we are supporting are not going to inhibit the drone industry,” she said.

The FAA has projected as many as 7,500 commercial drones may be in use by 2018. Some states are wooing the fledgling industry because they expect that growth to bring jobs.

The unmanned vehicles association estimates more than 100,000 drone-related jobs will be created by 2025 in the United States with an economic impact of $82 billion.

North Dakota is just a small piece of that. The organization estimates the state's economic impact will be $83 million, with 105 jobs created by 2025. FAA Administrator Michael Huerta will visit Grand Forks on April 21 to review the state's growing drone industry.