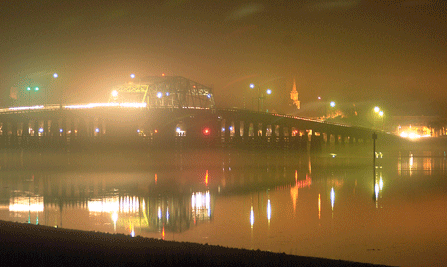 Fog casts an eerie haze over the Richard V. Woods Memorial Bridge in downtown Beaufort, S.C. Local officials want money to pay for upkeep if they take over some of the many state-owned roads in the city. (AP)

For years, the leaders of Beaufort, S.C., have promoted the charms and convenience of their coastal city, which has a historic downtown and cozy neighborhoods. Many of Beaufort's 13,000 residents can walk or ride their bikes to work or to stores.

To improve safety and boost pedestrian traffic, city officials would like Beaufort's street grid, parts of which are more than 300 years old, to include narrow lanes and on-street parking, which would encourage drivers to slow down. But Beaufort cannot make changes to many of its own streets because the state, which prefers wider roads and faster speeds, owns virtually all of the roads in town.

That may change soon, as South Carolina legislators try to save money by unloading part of the state's vast road network onto localities like Beaufort.

In recent years, North Carolina, Texas, West Virginia and other states that own large road networks (see sidebar) have tried similar tactics. The cost of maintaining roads varies widely by the type of road and the location, but it can add up quickly. For example, the Texas Department of Transportation in 2009 spent $1 billion on road maintenance in 2009, the most recent year for which numbers are available.

State transportation departments once used their roads to wield power over politics and planning. South Carolina, for example, originally stepped in to build roads between county seats, connect to roads in neighboring states and funnel travelers to main routes. State legislators, who controlled the roads in their home counties, kept adding to the state's network.

“The road system as it currently exists still reflects the organizational and political realities of the 1930s and 1940s rather than the 21st century,” said Pete Poore, a spokesman for the South Carolina Department of Transportation.

Now the roads are costly relics. But states have had limited success in giving them away, because cities such as Beaufort don't want to pay for them either.

“Our council feels there should be some quid pro quo. If we take the roads, we should be able to do what we want with them in a reasonable and responsible manner,” said Scott Dadson, Beaufort's city manager. “Secondly, we should have funds that come with it.”

Nationally, state governments own about 19 percent of the roads within their borders. But West Virginia, Delaware, Virginia, North Carolina and South Carolina all own more than 60 percent, according to the Federal Highway Administration. The state with the next-highest share is Maine, at 37 percent.

Each state amassed its huge network in a different way. But generally, state officials took over county roads and other farm-to-market routes because localities did not build enough of them or failed to maintain them adequately.

Decades later, states that gobbled up local roads no longer have the appetite to keep them. In growing areas, highways that once linked distant towns are now major local arteries. In some cases, states own odd stretches of local roads because of political reasons that were forgotten long ago.

Inflation and fuel efficiency are sapping revenues from state and federal gas taxes. The federal government, which provides a third of the money that states spend on transportation, expects to run short of road money as early as July. This year's brutal winter, which added expenses for snow plowing and pothole repair, further strained state transportation budgets.

Another key question in handing over roads is who keeps the federal money designated for their maintenance, said Leslie Wollack from the National League of Cities. The current federal transportation law channels more money through states, which then decide how much to turn over to their cities.

“That creates a very large problem for the local governments, because they're not getting the money. They may not have chosen to build these roads in the first place, yet they are suddenly being given the responsibility to spend a lot of money,” Wollack said.

Some states are trying to convince cities to take on the added financial burden of maintaining the roads by touting the benefits of local control.

That is the case in Texas, which owns 80,000 miles of road, more than any other state (although North Carolina is a close second). The Texas Department of Transportation launched a “turnback” program last summer to encourage medium-size and large cities to take back lesser-used roads.

Mark Cross, an agency spokesman, said cities could better protect property values and respond to residents' concerns if they took over the state streets. With a transfer, he said, “a local government would have total control of traffic flow, parking, driveway access, speed limits, road closures and maintenance schedules.”

The 59 localities eligible for the program would not get any money to keep up their new roads, but the state would redirect the funds it saved to other road projects in the same city on an ongoing basis. The state now spends $165 million a year maintaining the eligible roads, but it said it would not spend more than $100 million on the new program.

So far, only San Antonio and Lubbock have applied for the program, although other cities are in talks with TxDOT, Cross said.

West Virginia state Sen. Bob Beach, a Democrat, is working on legislation to enable counties to raise money for transportation that the state would match. (There are no county roads in West Virginia; all of the famed country roads are owned by the state.)

Business leaders in the Morgantown area, where Beach is from, developed the plan to cope with a population surge and increased traffic congestion in the area, the senator said. Monongalia County, which includes West Virginia University, saw a 20 percent jump in residents during the last decade, bringing the total to just more than 100,000 people.

Legislators from the state's northern panhandle, which is fast becoming a suburb of Washington, D.C., also are interested in the arrangement, Beach said.

Local leaders told Beach they thought they could generate $50 million to $80 million with new taxing authority, which they want the state to match dollar for dollar. One of the projects they are considering is a $100 million bridge to ease traffic traveling from Morgantown's hospitals and athletic facilities to the nearby interstate.

But legislators do not want to take up new taxing authority in an election year, so lawmakers will study the idea this summer and consider making the changes next year, Beach said.

In South Carolina, previous attempts to offload state roads onto cities fell flat, so lawmakers are considering adding some money to the mix.

“While we're willing to discuss taking over roads, we have to have a dependable revenue source for it,” said Scott Slatton, a legislative and public policy advocate for the Municipal Association of South Carolina.

The state House of Representatives approved offering financial incentives for cities to take over state roads. The proposal would dedicate a quarter of state road funds for an area to help cities maintain state roads that they take over. If the state did not provide adequate funding, the road would revert back to state ownership.

Even with the prospect of dedicated money, some cities are balking at the deal, Slatton said.

Counties and municipalities in New Jersey have the opposite problem: They own virtually all the roads within the state's borders. When repair costs mount, they often turn to the state and federal government for more money.

Bill Dressel, the executive director of the New Jersey League of Municipalities, said he asked state and federal officials to find money to deal with the costs of this winter's storms, with little luck.

The amount of snow wasn't enough to merit a federal disaster declaration, he was told, and the state did not have money for relief.

Dressel met with Assembly Speaker Vincent Prieto, a Democrat, around St. Patrick's Day to plead his case. But the speaker told Dressel in a light-hearted way that there was no extra money in New Jersey for any needs, a Prieto spokesman said.

“Bill,” Dressel remembers the speaker saying, “you're going to have to find the leprechaun's pot of gold, because you're not going to find it under the gold dome on West State Street.”