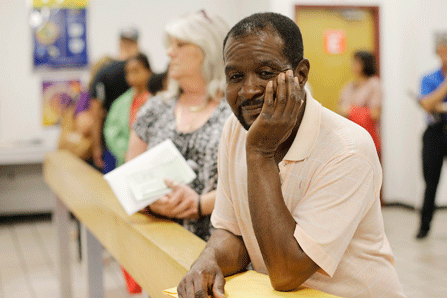 A man waits to mail his income tax return at a Pembroke Pines, Fla. postal center. More Americans are using electronic filing to avoid such lines, leading to quicker refunds in many states. (AP)

You can't blame Minnesota taxpayers for being confused this tax season. The eleventh-hour addition of 10 new tax credits has flummoxed many of them, even as most other states report routine filings with a significant uptick in electronic submissions.

The Minnesota situation is an anomaly in a tax season that is breaking records in many states for the swiftness of electronic filings and refunds. As the last two weeks of tax filing got underway, states were taking in record numbers of electronic forms and, as a result, getting refunds out faster, according to a sampling of state officials and the Federation of Tax Administrators.

So far, 93 percent of state individual income tax returns have been electronic, according to Ronald Alt, a researcher at the federation. Overall, Alt said, the number of electronic returns is up 4 percent over last year as of mid-March. The total number of returns processed up to this point also is up 3 percent. People who wait until the last two weeks to file tend to do so on paper.

The state filings largely correspond to the federal filings, because most taxpayers prepare state and federal returns at the same time. The Internal Revenue Service reported that as of March 28, 91 percent of the 82.4 million federal returns filed were electronic, up nearly 2 percent from the same point last year.  The IRS expects to receive about 148 million individual income tax returns this year and projects that 23 million returns will be on paper, down from last year's total of 25 million paper returns.

Surveying a representative sample of states, the Federation of Tax Administrators found a “stable filing season that is following last year's pattern. Nothing is popping out as being different, other than the small but inexorable drop in paper returns,” said spokeswoman Verenda Smith.

New York's “e-filing” is up 5 percent compared to last year, according to Geoffrey Gloak, spokesman for the New York Department of Revenue, and the number of refunds is up 25 percent compared to this time last year, he said. The state issued 3.9 million refunds totaling about $3.5 billion as of Monday. The average refund is $879.

Gloak also pointed out that 85 percent of New York taxpayers are eligible to file their state returns for free, using the state's “Free File” website. All but half a dozen states allow taxpayers to file electronically, either on free state-supported websites or through partnerships with commercial tax preparation software companies, according to the FTA. Many of the commercial sites provide advice to filers, but the state sites do not.

In March, Minnesota Gov. Mark Dayton and the state legislature threw a monkey wrench into the tax filing machine by passing 10 new 2013 tax credits. Now tax preparers, tax officials and ordinary Minnesotans are scrambling to reconcile returns with the new laws, which will affect about 300,000 filers.

Dayton, a Democrat, signed the bill March 21. State officials contacted the tax software vendors and preparers within 24 hours. The department wrote new software by March 28 and got it to the software vendors, who updated their software that weekend. The programs were tested March 31 and April 1. “By Tuesday afternoon (April 2) we had everything in place,” said Myron Frans, the state's commissioner of revenue. “At 11 a.m. the governor and I said, ‘Go ahead and file now.'”

Frans, who has been in his post for three years, said the scramble to update the tax system was unprecedented. “I have talked to a number of people who have been around the department a long time,” he said. “No one can recall making changes to the filing system this late.”

Fortunately, Frans said, the changes essentially align Minnesota's tax credits with federal credits, which made his job easier. For example, a schoolteacher who qualifies for a federal tax credit for school supplies she bought for her students now qualifies for a state tax credit of the same amount.

Most of the new credits apply to people with relatively low incomes, which created a lot of work for AccountAbility Minnesota, a volunteer network of tax preparers and financial advisors who assist poorer taxpayers.  An expansion of the state's version of the federal Earned Income Tax Credit, for example, applies to about 53,000 families earning up to $47,000. The new credit will return an average of $334 to those households on their 2013 returns.

Tracy Fischman, executive director of AccountAbility Minnesota, said her organization supports the new law, despite the fact that “on the logistical side, that retroactive implementation is a real challenge.”

Over the past several weeks, as the state was working out the logistics of the new law, the revenue department told taxpayers who had not yet filed to hold off until it updated the software. That didn't work for the lower-income clients she serves, Fischman said.

“We would never have told people to not file their taxes now because there were a lot of other tax credits they were going to be eligible for,” she said, noting that for many clients, just getting in the door once is difficult.

Her group filed the returns, but advised clients that they might be eligible for more credits. Those people will either get a bigger refund from the state revenue department, which has pledged to re-evaluate all returns after the season to see if they qualify for the tax credits, or will be able to file for the new credits next year, retroactively. They also could file an amended return, as can all other Minnesota taxpayers who qualify for the credits.