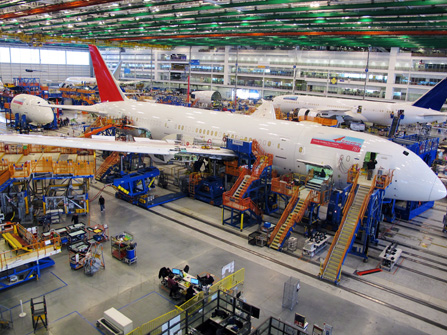 Workers assemble Boeing 787s in the company's North Carolina plant. The company's decision to locate in North Charleston has increased aerospace jobs in the state by 600 percent since 2007. Other Southern states have also lured aviation companies. (AP)

The South is home to auto giants Mercedes-Benz, Volkswagen and Nissan Motor Co. It is increasingly attracting some of the biggest names in aviation, including Boeing Co. in South Carolina, Airbus in Alabama, Gulfstream Aerospace Corp. in Georgia and GE Aviation in North Carolina.

Aerospace companies are taking a cue from the auto industry and moving their manufacturing operations to Southern states. The region's lower costs, generous state incentive packages and right-to-work laws that make it hard for unions to organize are motivating these companies to choose the South.

Four Southern states are among the top 10 states in aerospace job growth between 2007 and 2012, with South Carolina far ahead of the others, thanks to Boeing.  Aerospace jobs in South Carolina jumped by more than 600 percent over that time period, from 865 workers to 5,685 workers, said Amy Holloway, president of Avalanche Consulting of Texas, who analyzed data from the U.S. Bureau of Labor Statistics.

North Carolina ranks second in aerospace job growth with a nearly 34 percent increase over the same period (see sidebar). Boeing selected North Charleston, S.C., in 2009 to make and assemble its 787 “Dreamliner” aircraft, in large part because of the $900 million in tax breaks and other incentives the state offered over 30 years. California, Connecticut, Kansas, Texas, and Washington state still have 65 percent of the country's nearly 500,000 aerospace jobs. But of those states, only Washington state has seen an increase in aerospace jobs since 2001, Holloway said.

The other states have either remained relatively unchanged or lost employment. California, for example, has lost more than 8,000 aerospace jobs since 2002, including Lockheed Martin, which moved its corporate headquarters to Washington, D.C.  Besides opening its plant in South Carolina, Boeing in 2012 announced it was closing its Wichita, Kansas, plant and moving that production to Oklahoma, Texas and Washington state, affecting more than 2,100 workers.

U.S. manufacturing jobs in general were waning even before the recession, with employment shrinking by 22 percent between 2002 and 2012. The aerospace sector grew 7 percent over that same period. Even with the fiscal austerity in Washington, D.C., sales in the aerospace industry grew 41 percent from 2002 to 2012, driven largely by military and international sales, Holloway said.

And the sector is expected to grow. Boeing projects a demand for 35,000 new planes by 2032. Airbus projects building more than 29,000 jets in the same period.

States are fighting to land these jobs. Boeing, the world's largest aerospace company, sparked a bidding frenzy among states last year when a workers' union in Washington state rejected the company's contract offer and the company started looking elsewhere to make its 777X jet.  Missouri, for example, held an emergency special legislative session in December 2013 and approved a $150 million a year economic incentive package to lure Boeing there.

Washington kept the project after the union decided to accept the offer after all, including freezing pensions and changing to a 401(k) plan. But the significant incentives being offered reflect the importance of these jobs to states.

“These are crown jewel industries. States are not wrong to value them inordinately,” said Mark Muro, a senior fellow and policy director at the Brookings Institution in Washington, D.C.

Jobs in aerospace are considered “advanced” industries, meaning they are high in research and development, they employ and train a variety of well-paid workers and help foster regional and national economic prosperity. “The South has been turning itself upside down to create effective systems to attract these companies,” Muro said.

The auto industry's strong presence in the South has helped the region compete for aerospace jobs, in part because of the number of suppliers there that can provide goods to both sectors. The lower cost of living in some areas and a military presence whose technologies and expertise are aviation-focused also help attract aerospace companies.

Hourly compensation rates in general averaged $27 in Southern states in 2013, compared to $30 nationally. In the aerospace industry, labor costs in Washington are among the highest in the country. The mean annual salary of an aerospace machinist in Everett, Wash., was $53,500, compared to $45,500 in Charleston, S.C., and $42,500 in Kinston, N.C., according to a 2009 consultant's report. The report also said that the "frequency and high costs of work stoppages, fairly or unfairly, reflect negatively on Washington" in attracting aerospace work.

States in the South and Midwest also had the least expensive areas to live in 2013.

But a qualified workforce is one of the most important considerations of companies looking for plant locations.

In previous years, California, Kansas and Washington state all had educational institutions that provided aerospace companies with a stream of engineers and technicians with the know-how for such complex work, explained Sujit M. CanagaRetna, a fiscal policy manager at the Council of State Governments, who has studied the issue in a new report.  These states still can offer the expertise, but other states are offering to provide specialized training, including those in the South.

As Stateline has reported, states have offered billions of dollars in tax breaks to lure companies, and many of these incentive packages have extensive worker training provisions.

Low rates of unionization in the South and the many right-to-work laws there that make it harder for workers to organize have played a part in some companies' decisions.

Of the nine states that had union membership rates below 5 percent in 2013, seven were in the South. North Carolina had the lowest at 3 percent, followed by Arkansas (3.5 percent) and Mississippi and South Carolina (3.7 percent each).

Boeing got into hot water with the federal government with its decision to move a 787 airplane production line from a union facility in Washington state to its nonunion facility in South Carolina.

The National Labor Relations Board in 2011 charged that Boeing violated federal labor law because the company selected South Carolina to retaliate against previous strikes by the International Association of Machinists Union in Washington. Boeing refuted the charges, saying the decision to place the assembly line in North Charleston was based on several factors, including a favorable business environment and “significant financial incentives.”

The union agreed to drop its objections in 2012 after it reached a deal with Boeing that a new 737 aircraft would be produced in Washington state.

Gary Chaison, professor of industrial relations at Clark University in Massachusetts, said the lack of unions is “one of many factors, but it's still an important factor.”

“Don't Turn Chattanooga into Detroit” was a rallying cry of opponents of organized labor in the recent union vote at the Volkswagen plant in Chattanooga, Tenn., a tactic some said was effective as workers rejected a unionization drive by the United Auto Workers union. Detroit is currently in bankruptcy proceedings, the largest municipality in U.S. history to enter Chapter 9 bankruptcy.

The AFL-CIO called the Chattanooga vote “a minor setback, and not a permanent defeat.”

The American Enterprise Institute , a conservation think tank,  argues that since the recession ended in June 2009, more than two jobs have been created in right-to-work states for every one job created in states with unions.

The absence of unions is not the only factor appealing to companies.  “Clearly labor costs matter,” Brookings' Muro said, but so does access to supply chains, a skilled workforce and technology innovation.

New Jobs in the South

Other aerospace firms that have recently expanded or relocated to the South: