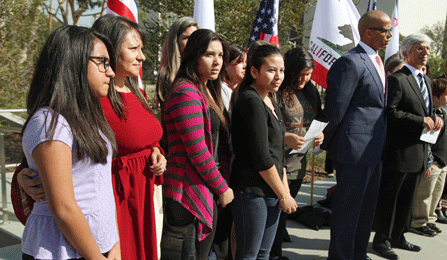 Attorneys Theodore Boutrous, far right, and Marcellus McRae, second from right, represent nine California public school students who are suing the state to abolish its laws on teacher tenure, seniority and other protections. California is the latest battle in a growing challenge to union-backed protections for teachers. (AP)

On trial: California's rules on teacher tenure and dismissal. The issue: Do the rules keep bad teachers in classrooms and doom some students to an inadequate education?

The lawsuit, filed by the nonprofit advocacy group Students Matter on behalf of nine public school students, followed unsuccessful attempts in contract negotiations and the legislature to give school districts more freedom to hire and fire teachers.

The plaintiffs in Vergara v. California argued that the state's employment rules leave so many ineffective teachers on the job that some students – many of them low-income and minority – fail to receive the education guaranteed by the state constitution. The two-month trial ended last Thursday in Los Angeles Superior Court. A ruling is expected within several months.

California's employment laws are considered among the most generous in the country to teachers, allowing them to be granted permanent employment status after 18 months on the job, for example, and making layoff decisions based largely on seniority.

The plaintiffs are challenging the state's tenure and layoff rules as well as dismissal procedures they say make it too costly and difficult to fire teachers for cause. Theodore J. Boutrous Jr., one of several prominent lawyers arguing for the students, said that of 275,000 teachers in California, only two are dismissed each year for poor performance or misconduct, on average.

Across the country, less than 2 percent of teachers were dismissed or did not have their contracts renewed for any reason in the 2010-11 school year, the most recent year available.

Frank Wells, a spokesman for the California Teachers Association, said Boutrous' figures are misleading because they represent only the teachers who go through the entire appeals process, when most teachers who are dismissed for cause do not.

The unions argue that the rules protecting teachers are needed for school districts to attract and retain good teachers and to ensure that employees are not fired for arbitrary or unfair reasons. They say the real issues holding back student achievement are inadequate resources, large class sizes and lack of parental involvement.

The lawsuit is important because it is the first to try to make the case that personnel policies are responsible for unequal education opportunities.

Elsewhere, many school districts and states have succeeded in modifying the rules around teacher employment, often with the aim of making it easier to get rid of ineffective teachers. In many states, politicians have argued that teachers should be held personally responsible for the failure of students to progress academically, bolstered by education reform advocates who push for more teacher accountability.

These efforts got a boost from the federal Race to the Top initiative, which awards grants to states on a competitive basis. Race to the Top encourages states to develop innovative ideas around several themes, including recruiting, evaluating and retaining effective teachers and principals. The initiative promotes the use of teacher evaluations to inform personnel decisions including tenure, promotion and compensation and encourages the removal of ineffective teachers after they have been given opportunities to improve.

Philadelphia schools superintendent William Hite announced last month that he will allow principals to assign teachers to schools without considering seniority. Hite said the seniority rules keep the district from matching the skills and abilities of adults with the needs of the children and schools. The Philadelphia Federation of Teachers plans a court challenge.

Several states, including New Jersey, North Carolina, Louisiana and South Dakota, have made it harder for teachers to receive tenure or have eliminated it.

North Carolina and South Dakota have ended tenure in recent years, although South Dakota's rules will grandfather those who receive tenure before July 1, 2016. The Idaho legislature ended tenure in 2011 but voters repealed the decision in a referendum the following year. In 2012, the Louisiana legislature made it more difficult for teachers to receive tenure but a judge ruled earlier this year that the law violates the state constitution.

Some school districts have tried to inspire better teaching by experimenting with performance pay for teachers.

The District of Columbia, for example, implemented a controversial incentive program that rewards teachers who are deemed “highly effective” with bonuses of up to $25,000. One study found that the program, now in its fifth year, appears to have helped improve ratings for teachers who were close to either being fired or receiving bonuses. The study did not say whether the program improved student achievement.

Other studies of incentive programs in Nashville and New York City have found little impact on student performance, however. A study from Chicago showed that a bonus given to a teacher upfront, with a condition that some money be returned if students did not improve, appeared to help increase student achievement.

Research shows that teachers are the most important factor inside a school driving student achievement. Among the questions raised by Vergara is how to evaluate teachers.

Raj Chetty, an economist at Harvard who testified for the plaintiffs in Vergara, found in his research that students with good teachers had higher lifetime earnings and a greater likelihood of enrolling in college, along with a lower likelihood of becoming teenage parents.

Another witness called by the plaintiffs was Sandi Jacobs, managing director of state policy for NCTQ, who said California is one of 10 states that do not require teachers to be evaluated at least in part on student achievement.

“There are very few states that haven't moved on teacher evaluation at all, which is central,” Jacobs said. “All of these policies have to start with being able to identify who your effective teachers are and who your underperformers are.”

But some say determining which teachers are effective is a lot more complex than it might at first appear.

Jesse Rothstein, an economist at University of California Berkeley's Goldman School of Public Policy, who testified for the defense, cautions against placing too much weight on the “value-added models” now being used by many states to try to determine the impact of a teacher on student learning. The models try to tease out how much an individual teacher has contributed to a student's academic progress.

Rothstein's research has found that such models can yield very different findings for the same teacher from one year to the next, in part because 25 students or so are not a large enough sample size to create a reliable estimate of a teacher's teaching ability. Value-added models also assume that students are assigned to teachers randomly, which very often is not the case.

“I think we want to think hard about how to use them,” Rothstein said of value-added models. “What I'm seeing is there are a lot of places that got way out ahead of the evidence and passed policies saying we should fire teachers based on value-added. It's not as easy as just saying ‘just do this.'”

Rothstein also testified about possible unintended consequences of changes to teacher tenure and dismissal rules, saying it could be harder for school districts to attract and retain good teachers and encourage teaching to the test, for example.

A Tennessee teachers' union filed a lawsuit in March challenging the state's teacher evaluation system. And last year, the Florida Education Association and the National Education Association filed suit arguing that the state's teacher evaluation system, which requires that at least 40 percent of a teacher's evaluation be based on students' test scores from the state standardized exams, is unconstitutional.

Back in California, Jim Finberg, an attorney for the teachers' unions, said the plaintiffs' claim that one must choose between teacher rights and student learning is false. “In fact, the interests of teachers and students are aligned,” Finberg said. “When teachers have good working conditions, students thrive.”

“If we know what the importance and impact of a teacher is, we should be putting policies in place that allow us to get the best teachers in front of as many kids as possible,” Lerum said.