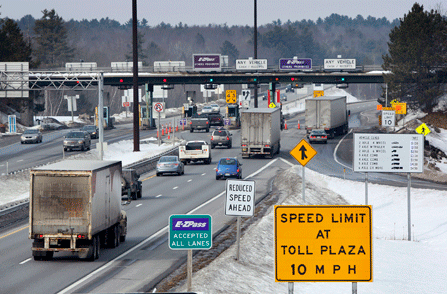 New England drivers who speed through toll plazas in neighboring states without paying are in for a rude surprise.

Maine, Massachusetts and New Hampshire have agreed to crack down on their own residents who frequently blow off tolls in the other states. The three-year-old arrangement has yielded only modest amounts of money, but it is being hailed as a model for interstate cooperation as electronic tolling spreads across the country.

“It's really an issue of fairness,” said Chris Waszczuk, administrator of the New Hampshire Department of Transportation's bureau of turnpikes. “If we don't have the capability to collect from the out-of-staters, it is going to be a huge problem,” he added.

Forty-two percent of the revenue collected on New Hampshire's toll roads comes from out-of-state drivers, Waszczuk said. So far, New Hampshire has recovered more than $180,000 from the owners of 190 vehicles over the course of the program, which began in August 2011.

Part of the reason why the collection numbers are so small is because about 70 percent of vehicle owners will pay their missed tolls after getting one or two invoices. Once the state prevents motorists from renewing their registration, Waszczuk said, it collects 95 percent of what it is owed.

“It's not in the millions,” Waszczuk said, but it “is important to remember that it creates the expectation among the travelers that they will pay.”

Easy to Use, Easy to Avoid

About 45 million vehicles in the United States now have transponders to pay tolls electronically, often without stopping or even slowing down, according to the International Bridge, Tunnel and Turnpike Association (IBTTA). Drivers pay $7 billion a year using those transponders.

Toll agencies running facilities from the Golden Gate Bridge to the Florida Turnpike in Miami are adopting “all-electronic tolling,” which eliminates toll booths altogether. Drivers either pay with an electronic device, or the agency bills them using information gathered based on a vehicle's license plate.

The systems eliminate chokepoints at toll plazas and keep traffic flowing smoothly. But they also make it easier for drivers to get away with never paying a toll.

With at least 115 toll agencies working in 34 states, there is a good chance the toll cheats would never get caught.

Unless, that is, states work together, as they have been in the three New England states, to collect money owed by their residents to other jurisdictions.

“Effectively, we're running a 7-Eleven where the customer has left the store with a product, and we're going to try to figure out how to get payment after the fact,” said Neil Gray, director of government affairs for the IBTTA.

A 2012 federal transportation law sets a deadline of October 2016 for tolling agencies to “implement technologies or business practices that provide for the interoperability of electronic toll collection programs.”

Some systems are making progress. Drivers who have an E-ZPass transponder can now use it in 15 states, mostly in the Northeast, but also including Illinois and North Carolina. The effort started in 1990 with seven tolling agencies from New Jersey, New York and Pennsylvania. The E-ZPass system is now the standard for the region.

Similar efforts are underway in other parts of the country. Toll systems in large states such as California, Florida and Texas are improving cooperation. Oklahoma, which has the most miles of tolled road of any state, announced last week that its transponders would be compatible with those used in neighboring Kansas.

Achieving interoperability means tolling systems have to work together, not just on the road, but in the billing office too, Gray said.

“Mechanically, it's not rocket science to read the data. It's really more about the payment function. I can see that tag, but if I don't have that account number, I can't do anything with it,” he said.

Tolling agencies are working to determine what information would have to be on a universal transponder that could work across the country, Gray said. If one is developed, he added, it would still take a while for agencies to deliver them to customers.

The three cooperating New England states, though, all use the same E-ZPass system, so their transponders are compatible with each other. The enforcement agreement addresses a “higher level” of interoperability concerns than most agencies are wrestling with, Gray said.

One of the most impressive features of the New England agreement, Gray said, is that the states apply their own penalties to their residents, rather than the penalties from the states where the violations occurred.

Getting the arrangement to work requires that several agencies with each state work together and with their counterparts in other states.

The departments of motor vehicles, for example, provide motorists' information to toll agencies in other states. They also enforce the sanctions on behalf of the outside agencies.

That can be trickier than just sharing information, said Waszczuk. New Hampshire, for example, puts strict limits on its driver data to ensure it is not sold to third parties or turned over to collection agencies. The states had to develop processes to make sure those rules were followed, even after the New Hampshire records were shared with agencies from the other states.

The states also had to determine how vigorously to go after out-of-state toll violators.

Tolling agencies typically wait until a driver avoids multiple tolls before going after him or her. They want to make sure it is worth the effort, and they are wary of being overly punitive, because they don't want to discourage drivers from using their facilities.

Under the New England agreements, the states agreed to use thresholds similar to the ones where the motorists live. For example, Maine will pursue New Hampshire residents who have missed 20 or more tolls. But it will go after Massachusetts motorists who have racked up $10 or more of tolls.

The different enforcement mechanisms may explain why toll agencies have had more success collecting out-of-state revenue from certain states.

Massachusetts last year was owed more than $932,000 in unpaid tolls and late fees from vehicles registered in New Hampshire, and another $195,000 from vehicles from Maine. Massachusetts did not break out its collection rates by state.

Waszczuk, the New Hampshire turnpike administrator, said there is one big hole when it comes to enforcing one state's tolls across borders.

“There are some states out there that don't have any tolling. They may not see the benefit of entering into one of these agreements and exposing their residents to registration denials for violations incurred in other states,” he said.

Nevertheless, the Maine Turnpike discovered it never hurts to ask. The Canadian province of Quebec provides Maine with information for residents who miss tolls, but it does not penalize them if they do not pay Maine.

Courtney, the turnpike's spokesperson, said even without Canadian enforcement, Maine has been able to collect from 40 percent of the Québécois it has notified.