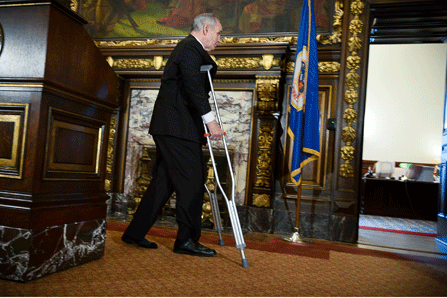 Minnesota Gov. Mark Dayton use crutches at his first public appearance at the state Capitol in St. Paul, since undergoing hip surgery. He was there to press for tax cuts, as many other governors are doing. (AP)

Maybe New York Gov. Andrew Cuomo should borrow a pair of crutches. They might have helped Minnesota Gov. Mark Dayton's cause.

Democrat Dayton hobbled into the state Capitol  five weeks after major hip surgery and blasted lawmakers for holding up the tax cuts he wanted. After quarrelling over his spending proposal, including a spat over funding for a new legislative office building, the Democratic-controlled legislature approved a $443 million tax cut, without the office building rider. Dayton pushed hard for the cuts, in part, because some are retroactive to 2013, meaning tax filers who are preparing returns now could take advantage of them and see refunds soon.

Meanwhile, Cuomo is locked in a battle with the legislature and New York City Mayor Bill de Blasio over whether to increase taxes to fund prekindergarten education in the city and state. The mayor wants to raise the surcharge on city earners making more than $500,000 annually, from 4.25 percent to 4.45 percent.  The state has to approve city tax increases.

Fellow Democrat Cuomo said finding money for pre-K can be accomplished without a surcharge on the wealthy. Instead, he wants tax cuts, including a property tax reduction that he said would save the average homeowner about $350 a year. The legislature is struggling with the tax increase proposal and has not acted, but the Republican-controlled Senate is not inclined to give de Blasio what he wants. Both Dayton and Cuomo are running for re-election.

At least 30 states are considering some kind of tax change this year, mostly tax cuts, as the economic recovery takes hold.  In states where revenues have failed to keep up with estimates, some lawmakers are considering raising taxes.

In Delaware, where revenue projections are down from earlier estimates, there is talk of corporate tax increases. The Delaware Economic and Financial Advisory Council projected that revenues in the current fiscal year that ends in June will fall $107 million short of a previous projection in December, due mostly to lower revenues from corporate income taxes. That has led Democratic Gov. Jack Markell to propose an increase in corporate taxes – ironic for a state that is viewed as the most corporate-friendly in the U.S.

In New Jersey, however, where revenues are estimated to be lagging as much as $400 million behind projections, Republican Gov. Chris Christie has not proposed new taxes in his fiscal year 2015 budget.

A trial balloon by Democratic Sen. Raymond Lesniak to increase the state's gasoline tax to fund infrastructure repair has stirred up a firestorm, causing him to lower the proposed increase from an extra 24 cents a gallon to 15 cents.

A recent poll by Fairleigh Dickinson University showed 72 percent of those surveyed opposed increasing the gas tax, while 63 percent called for a higher tax on millionaires instead.

Republican governors are having an easier time with tax cuts, particularly in states where the GOP also dominates the legislatures, but squabbles remain in many states in the thick of legislative sessions this spring.

A survey of state lawmakers by the National Conference of State Legislatures found tax policy topping the agenda in about a dozen states this year and being a significant part of the discussion in many more. At the same time, states still worry about the economy.

“We still have high unemployment, and there are a lot of unknowns about when the next downturn will occur,” Democratic Sen. Richard Devlin, chair of Oregon's Joint Committee on Ways and Means, said in the NCSL survey. “We are better off than a few years ago, but we are reluctant to use the word ‘stable.' There is nothing to celebrate.”

Still, tax cuts are on the table.  Cuomo traveled around New York this week pressing for his property tax reduction. “Homeowners get it. Taxpayers get it. The politicians don't get it,” Cuomo said in a press conference in DeWitt.

He is urging local jurisdictions to make up for the lost property tax revenue by finding ways to combine services to save money. “The easy answer for government is raise taxes. If the choice is change how you are doing things, find economies of scale, get creative, work with local governments in a way you've never done before,” he said. “Raising taxes is always the easy answer. That's why we have the highest taxes in the nation. That's why people are leaving upstate New York.”

In  Minnesota, the tax cuts provide $57 million in retroactive tax relief on returns filed for 2013, meaning that up to 270,000 state taxpayers will get some of the $49 million in income tax cuts in their tax refunds this year, according to the state Department of Revenue.  About $8 million of the cuts go to businesses. The cuts partially make up for a $2.1 billion tax increase passed in Minnesota last year.

Indiana Gov. Mike Pence, a Republican, has also been battling local governments over cutting taxes. Pence signed a bill this week that reduces the corporate income tax from 6.5 percent to 4.9 percent in steps by 2021. He signed the bill despite opposition from local governments, which get $1 billion annually in corporate tax revenue.

Republican Gov. Scott Walker of Wisconsin also inked a tax cut bill this week that will give state residents an average income tax cut of $46 each in April 2015, and homeowners an average cut of $131 each on December 2014 property tax bills, according to the legislature's nonpartisan budget office.

Farmers and factory owners would also get a total $36.8 million in cuts. Walker and the Republicans see this reduction as an incentive for businesses to stay or locate in Wisconsin. Democrats in the divided legislature considered it a giveaway to the state's wealthiest residents.

In Arkansas, Democratic Gov. Mike Beebe had his veto of a sales tax break for sand used in oil and natural gas drilling overridden by the Republican-dominated legislature. The state Department of Finance and Administration had removed the exemption, and the legislature decided to put it back. The governor supported his agency's decision, but the legislature had other ideas.

Arkansas state Sen. Jonathan Dismang, who chairs the committee that drove the override, said, “I'm not sure it really increases how much we're competitive (with other drilling states). It does reflect our willingness to want to have industry in the state.” Dismang stressed that the tax exemption is not new and had been on the books since the 1960s, before the department decided to scrap it.

In Oklahoma, the Republican-controlled House and Senate have passed dueling tax cut bills, both triggered only when state revenues rise to certain levels. In the Senate bill, the highest income tax rate would be cut from 5.25 percent to 5 percent, if projections for the state's general fund revenue reach a level high enough to offset the revenue loss. The rate could drop again, to 4.85 percent, if revenue growth continues enough to make up for the additional cut.

The House bill does not have the second tier in it, but includes a corporate income tax rate cut from 6 percent to 5 percent, and also includes revenue growth triggers. The earliest the reductions could take place is 2016. The chambers are attempting to reconcile differences in their bills before the session ends in May.

“There's a 50-50 chance we will have an income tax reduction,” Republican Rep. Earl Sears, vice chair of the appropriations and budget committee, said this week, noting that the bills are quite similar. Last year, the Oklahoma legislature tried a similar tax cut, but it was tied to repair and restoration of the state Capitol and was thrown out by the state Supreme Court, which ruled it was “logrolling,” or trading of favors, Sears said.

This year, there's no mention of the Capitol repairs. Democrats would like to reallocate any surplus to other programs, but Sears said he is treating the taxpayers “like a state agency. Just like we fund any other agency, we're funding back to our citizens.”

In Illinois, Democratic Gov. Pat Quinn called for making the “temporary” income tax hike instituted three years ago permanent. Besides opposition from the legislature, Republican Bruce Rauner, Quinn's opponent in his re-election bid, is against the measure. Without action, the personal income tax rate is scheduled to drop back to 3.75 percent from the current 5 percent, costing the state treasury an estimated $4 billion.

Tax cuts are easier to accomplish when states are seeing higher revenues. An analysis by The Pew Charitable Trusts (which funds Stateline) found that, after adjusting for inflation, total tax revenue for the 50 states combined finally recovered from its plunge in the recession in the middle of last year.  But recovery varied widely. Only 20 states were back to their peak levels by the second quarter of 2013.

According to data released this week by the U.S. Census Bureau, state tax revenue has continued to rebound, showing growth for 16 straight quarters through the end of 2013, which is midway through most states' current fiscal year. Tax revenue in each quarter was higher than the same quarter of the previous year.