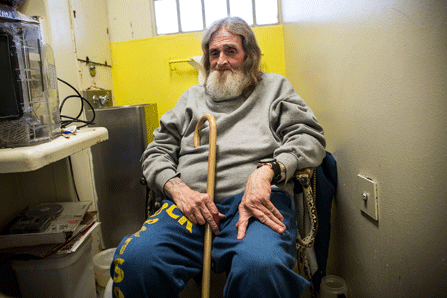 Frank Fuller, who has hepatitis C, sits in his prison cell in California Men's Colony prison in San Luis Obispo, Calif. New drugs could wipe out the hepatitis C virus, which is rampant in prisons, but states may not be able to afford to give them to inmates. (Getty)

If used widely, a new generation of antiviral drugs has the potential to wipe out the deadly hepatitis C virus in the United States. But the high price of the drugs might prevent their use in prisons, which house as many as one-third of those who are infected.

The drugs cost anywhere from about $65,000 to $170,000 for a single course of treatment—between three and nine times more than earlier treatments. Ronald Shansky, former medical director of the Illinois prison system and founder of the Society of Correctional Physicians, described that price as “extortionarily high, criminal.”

Fair or not, the cost of the new drugs is likely to keep them out of reach for most infected prisoners. To put the price in perspective, the average annual cost for states to house an inmate is $29,141. The minimal cost of treating a single patient with the new hepatitis C drugs is more than double that amount.

The two manufacturers, Janssen Therapeutics and Gilead Sciences, defend their prices, saying their medications represent a huge advance in treatment.

Hepatitis C progresses slowly, but without treatment it can lead to liver failure and death. Given the grave consequences, the availability of the new drugs creates a wrenching dilemma for correctional systems. With more expensive specialty drugs expected to enter the marketplace in the coming years, the decisions will only get more vexing.

“The question is if you have a cure rate of approximately 90 percent or higher, is there justification for not treating someone other than the huge cost?” asked Jack Beck, director of the Prison Visiting Project of the Correctional Association of New York, “But no state has the budget to absorb those huge costs.”

Approval of the new drugs late last year by the U.S. Food and Drug Administration marked a welcome advance in the treatment of hepatitis C. It is estimated that as many as 5.5 million Americans have the disease. At least twice as many carry the virus but don't know it, since it can remain asymptomatic for decades.

A new study estimates that 1.86 million people with antibodies to the virus were incarcerated during the study year. The virus is passed most frequently through needle-sharing during intravenous drug use and tattooing, which are common in prisons. The study estimated the prevalence rate of hepatitis C in state correctional facilities to be about 17 percent, compared to a rate of 1 percent to 2 percent in the general population.

The new drugs, simeprevir (marketed as Olysio by Janssen Therapeutics, a division of Johnson & Johnson) and sofosbuvir (sold as Sovaldi by Gilead Sciences), have a cure rate of  95 percent or better in some clinical studies, compared to 45 percent for previous medications. Unlike the alternatives, simeprevir and sofosbuvir cause only mild side effects, and can be taken orally. Furthermore, patients only have to take them for12 to 24 weeks, compared to at least 48 weeks for the previous treatments.

Yet at approximately $1,000 per pill, the cost is likely to prove a challenge for the entire health care system, including Medicaid, Medicare and private insurance companies. The difference is that prisons are constitutionally bound to provide adequate health care to prisoners.

States and municipalities typically pay for prisoner health care out of their corrections budgets. When effective HIV treatments emerged in the late 1990s, those budgets grew to accommodate the cost of the drugs, said Edward Harrison, president of National Commission on Correctional Health Care, which sets standards for prisoner health care.

“It's something that everyone is grappling with right now,” said Lara Strick, the infectious disease consultant to the Washington State Department of Corrections. “I can't say I or anyone else now knows the right answers.”

Whether states have the option to not treat prisoners with the new drugs is open to debate. Under the Eighth Amendment, prisons are barred from demonstrating “deliberate indifference” to the well-being of prisoners. But Gabriel Eber, staff counsel of the ACLU National Prison Project, said that mandate falls far short of a requirement to provide optimum care. Most states don't even provide prisoners with the old, less expensive hepatitis C drugs, and only 12 states screen inmates for the disease.

Immoral Not to Treat?

The courts generally have dismissed prisons' pleas of poverty as an excuse for not providing care. At the same time, however, they tend to defer to prisons on the question of what constitutes “medical necessity.”

As a result, Eber said, “I don't see [the new treatments] being widely available until costs come down.”

Others, however, insist that with an effective cure available, it will be immoral not to treat prisoners with the new hepatitis C drugs. “The ethics are going to get to where there's no justification for not treating when there is a cure,” said Beck of the Correctional Association of New York.

That will be especially true if early research results bear out that those with hepatitis C are more likely to develop other deadly diseases, such as diabetes and lymphoma.  In that case, the view of what constitutes medical necessity for patients in the early stages of hepatitis C could change dramatically, said Michael Ninburg executive director of the Hepatitis Education Project in Seattle.

Spaulding, the Emory researcher, said the new hepatitis C drugs and others in the pipeline could be the “straw that breaks the back of corrections” and force large-scale changes in penal systems.  Already, as a result of a U.S. Supreme Court decision, California has had to reduce its prison population by tens of thousands because of inadequate health care. Spaulding said she can foresee the high costs of medicine could force cuts in prison populations across the United States.

Another possibility, she said, would be to create a different mechanism for paying for prison health care, perhaps by extending Medicaid to jail and prison populations.

One thing is clear: The goal of eradicating hepatitis C won't be achieved unless the campaign involves prisons.

“Because of these new drugs, the conversation about eliminating hepatitis C is finally happening,” said Ninburg of the Hepatitis Education Project. “But if it's going to be eliminated, we are going to have to address hep C in the correctional setting.”