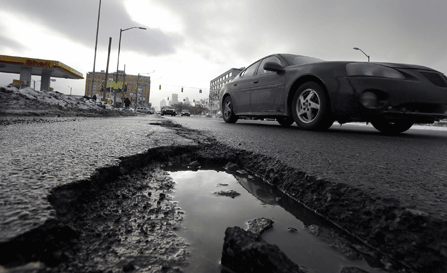 A car drives by a pothole in Detroit. Michigan lawmakers approved $100 million to help repair roads after a brutal winter taxed maintenance crews and drained state and local funds for road upkeep. (AP)

Fallout from the freakishly cold winter will linger well into spring as states grapple with damage to road budgets.

As a demanding pothole season begins, many state legislators are still looking for money to pay the bills for winter work. Snowstorms forced states and localities to spend millions of dollars more than they budgeted for salt, sand, fuel and overtime for employees who drive the plows and fill the potholes.

“It's extraordinarily difficult to budget for the snow and ice season, and we have to do it. It's not something we can cut back on, because it's a public safety issue,” said Michael Verseckes, a spokesman for the Massachusetts Department of Transportation.

The  Massachusetts legislature approved a $30 million increase in the agency's winter budget and gave it the authority to borrow up to $50 million more. That comes on top of the $43 million the state originally set aside for winter work, Verseckes said.

Michigan approved a similar increase, and New York is considering adding local aid to its upcoming budget. Pennsylvania spent all of its winter maintenance budget and is using money from a major funding boost for transportation passed last year to fill the gap. Other states, such as Delaware and North Carolina, are using money originally set aside for summer maintenance to cover winter expenses.

The winter budget crunch comes at a time when many state transportation budgets are already under duress. Gas tax revenue is not keeping up with expenses for many states and the federal government. The U.S. Department of Transportation said it may have to slow down payments to states as early as July, when the Highway Trust Fund is projected to run out of money.

“State DOTs are really facing a double whammy” with the winter costs and the uncertainty over federal funding, said Beth McGinn, a spokeswoman for the American Road and Transportation Builders Association. The road builders worry that states will put off big projects in the summer to find money for winter's bills.

“This is shaping up to be a severe pothole season,” said Leland Smithson, an expert on winter weather for the American Association of State Highway and Transportation Officials.

“We're suffering from a combination of aging infrastructure and the aftereffects of the massive effort by transportation agencies to remove tons of snow and ice,” he added.

This year is already on track to be one of the five most expensive for insurance companies since 1980, according to the Insurance Information Institute. Snowstorms in the first seven weeks of 2014 caused $1.5 billion in damage to insurance policyholders, compared with $2 billion for all of 2013. Winter damages included car and truck accidents, roof collapses, burst pipes and fallen tree branches and power lines.

At one point in February, 49 states had snow on the ground (Florida was the exception). But the budgetary impact has been more uneven. Transportation officials in Idaho and Nebraska said their winter maintenance budgets were normal, but states east of the Mississippi River took a bigger budget hit.

Virginia will spend at least $100 million more than the $157 million it had set aside for winter maintenance. Maryland's expenses will hit $130 million, nearly double its five-year average  of $70 million. Both states plan to use money previously designated for spring and summer maintenance to cover the added costs.

The season also packed a wallop to budgets in Michigan. Detroit received more snow than it had in 130 years. Temperatures were so low, road salt became ineffective. Whipping winds forced snow plows to clear the same roads multiple times a day.

“A lot of our members have totally blown through their entire year's budget, because of this epic winter,” said Denise Donohue, director of the County Road Association of Michigan.

Legislators passed a supplemental budget that included $100 million to help the state and counties pay the extra costs incurred because of the cold. The money would come from an expected surplus in state revenues. But even that amount of money will likely not cover all the additional expenses, Donohue said.

Michigan Sen. Goeff Hansen, a Republican, pushed for the supplement. “Otherwise, we're not going to have any road repairs done this summer,” he said. “(Localities) would spend all of their money on plowing snow and salt, they'd have no money to fix the potholes that are going to come.”

The deep freeze this year will likely mean worse potholes than normal, too. The frost this year is 4 or 5 feet deep in Michigan, or twice as deep as normal. As the ground thaws, it will open up more potholes and cracks in the pavement.

Potholes are most common during the spring, because of the cycle of water freezing and thawing. During the day, water melts and seeps into cracks and other weak spots in the roads. When it freezes at night, it expands. That makes the openings larger and allows more water to enter the next day.

“We're going to have pavements that erupt with potholes,” said Kirk Steudle, Michigan's transportation director. “We are already seeing roads that are just crumbling from this winter.”

Steudle helped a state repair crew patch potholes in Ann Arbor last month. In the two hours he spent with the five-person team, they repaired just a quarter mile of one lane, before snow started to fall and crew members had to leave to drive snow plows.

At this pace, it would take a whole day to fix just one mile, Steudle noted. “There's just a tremendous amount of work that needs to be done,” he said.

Spring brings other challenges too. Melted snow can cause flooding. Crews have to clean up trash and accident debris that had been buried by snow, as well as sand that had been spread on roads to provide traction. And then, of course, grass growing on shoulders and medians will need to be mowed.

“We're going to do all of those things, but by the time we get to the real summer, there's no money left,” without the extra funding, Steudle said.

Over the last five years, the state spent an average of $88 million on winter maintenance costs. This year, that bill is expected to be between $126 million and $140 million.

It costs about $20 to fix a pothole. New York City filled 207,129 of them already this year, more than it filled in the last two years combined, according to a running tally by the city transportation department.

In Albany, state Sen. Jack Martins, a Republican, is trying to find $50 million in the upcoming budget to help local governments pay for the repairs. Localities maintain 87 percent of roads in the state.

Massachusetts' uptick in repair costs could be the result of both bad weather and more aggressive efforts to get motorists to report damage, said Verseckes, the state DOT spokesman.

The agency has posted messages on major highways asking drivers to report potholes. It is also promoting a toll-free phone number for residents to use. Better information on the condition of the roads helps the state to prioritize repairs and dispatch crews more efficiently, Verseckes said.

In Michigan, Donohue, of the county roads group, said new state money will help county agencies catch up to where they would normally be at this time of the year. But she stressed that the one-time money would not be enough to address the state's long-term transportation needs.

“The pothole nightmare that we're experiencing has a much bigger price tag to fix it, and it will take a decade to get that done,” she said.