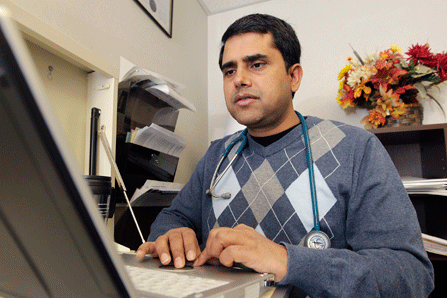 Dr. Damodar Poudel updates patient records in Chillicothe, Ohio. Nearly half of all U.S. physicians maintain electronic patient records, but some states are lagging behind. (AP)

Less than a decade ago, nine out of 10 U.S. doctors updated their patients' records by hand and stored them in color-coded files. Today, nearly half of all office-based physicians type their clinical notes into computers and maintain electronic files that include patients' demographic information, complaints, procedures, test results and prescribed drugs.

This greater use of electronic health records is supposed to help doctors and hospitals better coordinate their patients' care and allow them to meet the cost-containment goals in the Affordable Care Act. Nationwide, 48 percent of office-based doctors used electronic records in 2013, up from 40 percent in 2012 and 11 percent in 2006.

While the doctors and hospitals in some states are forging ahead, in other states they are lagging behind. In North Dakota, 83 percent of physicians have made the switch to electronic records, according to a recent survey by the Centers for Disease Control and Prevention. Minnesota ranked second, at 76 percent, followed by Massachusetts at 70 percent.

But in Maryland, Oklahoma, Vermont, West Virginia and Wyoming, the adoption rate is only 37 percent. Nevada's rate is 33 percent, and in Washington, D.C. it is 31 percent. Connecticut and New Jersey fare even worse, at 30 percent and 21 percent, respectively.

It's not clear why there are such disparities among states, though researchers do know a few things about the kinds of doctors who are mostly likely to embrace electronic records.

Despite recent progress, the U.S. as a whole still lags behind other developing countries in adopting electronic records, according to a survey by The Commonwealth Fund, a health research group.

Ultimately, the Obama administration wants all U.S. doctors and hospitals to share electronic health records. But experts remain cautious about whether the current growth rate can be maintained. According to a new report from the GAO, many physicians who received federal grants to adopt or upgrade their electronic health record systems in 2011 did not continue the incentive program in 2012.

Under the Health Information Technology for Economic and Clinical Health (HITECH) Act, which was part of the 2009 economic stimulus package, the federal government set aside up to $30 billion to help doctors and hospitals make the transition to electronic records. Under the law, office-based health care professionals can receive up to $44,000 in Medicare grants, in five yearly installments; and $63,750 in Medicaid grants, in six yearly installments. In addition, hospitals are eligible for millions of dollars under both health care programs if they develop and maintain electronic health records.

In the first year of the Medicaid incentive program, doctors simply needed to agree to “adopt, implement or upgrade” a federally certified health records system. But in the second year, 2012, they had to demonstrate so-called "meaningful use" of their systems.

That meant doctors who wanted to continue receiving grants had to show that they were, in fact, using their electronic records and sharing them with other providers to improve the quality of patient care. They also had to share the information with patients to help them better manage their own care.

In addition to promoting greater use of electronic records, the administration credits the HITECH law with creating a robust market for health IT products: There are now 941 vendors offering more than 1,700 federally-certified electronic health records products. According to the Bureau of Labor Statistics, more than 50,000 health IT-related jobs have been created since the law was enacted.

But proving meaningful use may have been too high a hurdle for some providers. In the second year of the Medicaid incentive program, 36 percent of hospitals and 61 percent of health care professionals withdrew, according to the GAO report. “It's a big drop off,” said author Linda Kohn. But she said it's too early to say how it will affect the program's overall goals. “We only have two full years of data on the program. It's still pretty new."

Under Medicaid, doctors have until 2021 to collect the maximum level of incentive money and there is no penalty for pulling out of the program for a year. In the Medicare program, doctors must demonstrate meaningful use in the first year and participate for five consecutive years between 2011 and 2017 to collect full benefits.

The GAO estimates $15 billion in incentive payments went to individual health care professionals and hospitals in the first two years of the program. However, the Obama administration still has not developed a way to determine whether the goals of improved health care quality, efficiency and patient safety are achieved, the GAO cautioned.

“It's a large investment,” said Fredric Blavin, an economist at the Urban Institute, a nonprofit group that does research on economic and social issues. “Whether or not it is going to lower costs or improve patient outcomes is yet to be determined.  Any changes aren't likely until the long term — 10 or more years from now.”