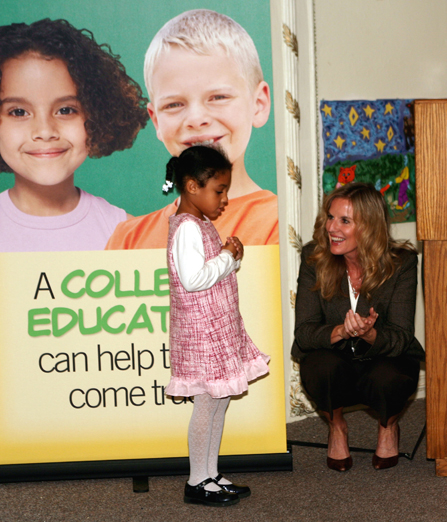 Micaela Jones, 4, and Missouri Treasurer Sarah Steelman at the launch of a new partnership involving Missouri's 529 College Savings Plan. Many states have made changes to their 529s in an effort to make them more enticing to savers. (AP)

Parents and grandparents often turn to state 529 savings plans to sock away money for a child's future college costs. But many states recently have made changes to their programs, and with the tax filing deadline fast approaching, savers who don't pay attention may miss out on the full benefits of such accounts.

Money contributed to a 529 (named for the section of the federal tax code which authorizes them) is not deductible from federal income taxes, but the investment grows tax-deferred. There are two types of 529s: 529 savings plans, which are similar to a 401(K) plan or Individual Retirement Account (IRA), in that a saver invests in mutual funds or similar investments; and prepaid plans, which allow savers to pre-pay all or part of the costs of an in-state public college education, to avoid future price increases.  In many cases, the money in a prepaid plan also may be used at private and out-of-state colleges.

The plans are operated by states or educational institutions. They are available in all states but Wyoming, and 30 states and the District of Columbia allow savers to take state income tax deductions for 529 contributions.

Some states have annual limits on how much you can deduct, ranging from $250 per individual tax filer in Maine to $10,000 in Illinois. Other states limit deductible contributions to a percentage of income, or set lifetime contribution limits. South Carolina allows savers to deduct the most in state income taxes over the lifetime of the beneficiary, a total of $370,000, according to Joe Hurley, founder of Saving for College and a leading expert on the accounts. Three states – Indiana, Utah, and Vermont – offer tax credits.

With college costs exploding, many states are trying to convince more people to make use of 529 plans. For example, earlier this month Maine announced that it would partner with the Portland-based Alfond Scholarship Foundation to open up 529s, with initial investments of $500 in each account, for each baby born in the state.  Colleen Quint, president and CEO of the foundation, said the $500, which will be invested in a mutual fund, might triple over 18 years.  The foundation, which has about $700 million in assets, expects to give the money to about 12,000 babies annually, Quint said.

Though $1,500 wouldn't go very far in paying for a private four-year college, it would make a dent in community college or trade school costs (at least at current prices). In any case, Quint said, the broader goal of the initiative is to get families thinking about saving for college,

“It's an opportunity for kids and their families to think about college in some very real ways and not some pie in the sky dream,” Quint said. “The $500 is seed money. It has practical as well as aspirational benefits.”

Other states are also moving to enhance their 529 plans, including:

“It's a competitive marketplace, so you don't have to use your own state's plan,” Hurley said. “Feel free to shop around. It won't make a difference where your child goes to college.”

Betty Lochner, director of Washington state's Guaranteed Education Tuition program, said “the general rule of thumb that we give to people when they are starting their planning is to start with their home state plans and see what the plans are.” Lochner also chairs the College Savings Plan Network, an affiliate of the National Association of State Treasurers, which monitors and tracks 529 plans in all the states.

“Every state has different reasons for changes,” she added. “Sometimes they are trying to add more flexibility or increase (citizens') exposure to the plans in some way. Sometimes it comes down to state revenue and they are concerned about the cost of providing those expensive tax breaks as their use is increasing.”

North Carolina used to offer a tax deduction for deposits into the state's 529 plans, but scrapped the deduction last year as part of a broad-based tax reform plan. Savers in North Carolina can deduct 529 contributions on their 2013 taxes, but not on their 2014 taxes or thereafter.

The broad tax overhaul increased the standard deduction for most individual filers, and that more than made up for the elimination of the 529 tax break used by only some filers, according to Republican state Rep. David R. Lewis,  who sponsored the tax reform bill.

“While the deduction for the 529 plan was eliminated, the standard deduction that all taxpayers can claim was increased by 240 percent,” said Lewis in an interview.  “So all taxpayers benefit, instead of the very, very small percentage that were taking advantage of the North Carolina 529.”

Yet the number of 529 accounts opened in North Carolina dropped dramatically in the first two months 2014, according to Shera Hube, vice president for marketing for the College Foundation, Inc., North Carolina's 529 plan.

New accounts established in January and February of 2013, the last year the deduction was in place, totaled 2,475, Hube said, while the 2014 total for the same two months was just 1,517. And last year, “rollouts,” or people taking their money out of 529s and rolling them into other kinds of college savings plans was 161 in January and February of 2013, but rose to 412 for the first two months of this year.