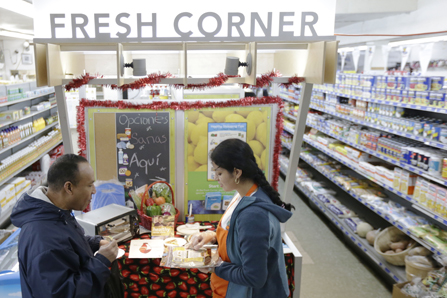 A customer considers buying whole grain tortillas at the Indiana Food Market in Philadelphia, Penn. Some convenience stores in disadvantaged areas of the city are participating in an effort to help residents eat healthier. Many states are taking steps, such as expanding access to healthy food, to eliminate health disparities between different populations. (AP)

African-Americans are more likely to suffer heart disease and diabetes than whites. The cancer death rate for men is a good deal higher than it is for women. American Indians and Alaska Natives are more likely to smoke tobacco than Hispanics, blacks or whites. And Native Hawaiian adults are less likely to exercise than other ethnic groups.

These differences are called “health disparities,” and in the last two decades, the federal government and the states have focused on eliminating them.

How do health officials identify disparities?

Data, of course. The U.S. Centers for Disease Control and Prevention (CDC) compiles lots of statistics on health outcomes and access to health care services and then breaks down the results by age, gender, race, etc. What is the infant mortality rate based on the race of the mother? How do education levels relate to hypertension? What region of the country has the highest rate of suicide? Many states collect their own data to break results into smaller geographic units, such as county or even zip code.

When it comes to health disparities, data is all important. “The solutions are only as good as the data going in,” said Robert Like, director of the Center for Healthy Families and Cultural Diversity at the Robert Wood Johnson Medical School at Rutgers University.

So once they have the data, then what?

Once the disparity is known, the challenge is coming up with a strategy to reduce it. Sometimes the best way to attack a health disparity is to take a broad approach. Low-income people are less healthy than wealthier ones, in part because many of them lack health insurance. The Affordable Care Act tries to tackle this disparity by expanding Medicaid eligibility and providing subsidies for low-income people to purchase insurance on the health exchanges.

Sometimes a disease or condition is especially pronounced in a geographic area. Asthma is more common and more severe among children, women, African- Americans and Puerto Ricans.  But the main factor appears to be where you live, not who you are:  Many of the people who have asthma live in poor, inner-city communities. The way to tackle the problem, therefore, is to educate all the people and practitioners in urban neighborhoods about preventing and treating the disease, rather than focusing on a particular race, age group or gender.

What about disparities that affect specific groups?

In those cases, cities and states can take a much narrower approach. For example, after Maryland discovered that the residents of a home for seniors in Annapolis used a hospital emergency department at an unusually high rate, the state declared the residence a “health enterprise zone” and opened medical offices in the first floor. The expectation is that the residents will use those offices to meet most of their medical needs and the rate of emergency room visits will plummet.

When a particular ethnic group is prone to a disease, the challenge is finding an approach to education, prevention and treatment that will resonate with that group. At the most basic level, that might mean creating and distributing educational materials in a specific language.  A more sophisticated approach might be to boost providers' “cultural competency.”

Many health systems recognize the need to have interpreters on hand to help non-English speaking patients. Cultural competency is a step beyond that. It means ensuring that health care workers are well-versed in the culture of a specific community, familiar with its customs, behaviors, and religion. The idea is that medical providers who understand the culture in which they work are more likely to be effective.

For example, a doctor who is familiar with the dietary customs of a patient's ethnic group will be better equipped to suggest healthier eating habits. Being aware of male-female social norms can help doctors and nurses avoid offending patients during examinations. And in end-of-life medical situations, it's important for health care providers to be familiar with the rituals and beliefs of the patient's particular faith.

The concept is now so widely accepted that many states have adopted requirements that medical practitioners take cultural competency courses as part of their medical education or as a requirement for relicensing. Many states also have adopted programs to entice medical providers of certain ethnic and racial groups to work in communities with similar characteristics.

Surely there is more to it than language and cultural training for doctors and nurses?

Much more, and that's why the fight against health disparities is stretching into areas once deemed far outside the health realm. “Eliminating health disparities is not just about clinical intervention,” said Mildred Thompson, director of the PolicyLink Center for Health Equity and Place, a research and advocacy group that focuses on the issue. “We also have to look at changing the environment, and that has to do with everything from crumbling infrastructure, housing, transportation, and access to healthy foods.”

To remain healthy, people need housing that is free of lead paint, asbestos and dust mites. Transportation is crucial to access to health care. And people without easy access to fresh fruit and vegetables are more likely to be obese or have heart disease or diabetes.

Many experts also point to crime as a cause of health disparities, and not only because disproportionately high numbers of minorities are victims of violence. A dangerous atmosphere in a neighborhood deters people from spending time outside or exercising. Similarly, the amount of green space in a community has a direct bearing on the health of nearby residents. Factors such as these are called the “social determinants of health.”

Increasingly, policy makers are realizing that to improve public health, they must address social determinants such as infrastructure, transportation, crime, and housing. “It is complicated, absolutely,” said Jeffrey Sanchez, a Democratic state representative in Massachusetts who has worked in the area of health disparities for 10 years. “You can sit 15 PhDs in a room and none of them will have an answer.”

What are states doing to address health disparities?

A lot. According to Melissa Hansen, a specialist in minority health and Medicaid at the National Conference of State Legislatures, 21 states this year are considering measures related to health disparities. For example:

Aren't these kinds of initiatives expensive?

Actually, eliminating disparities reduces overall health costs, by keeping people healthy and out of the hospitals. The Joint Center for Political and Economic Studies at Johns Hopkins University estimated that eliminating health disparities for minorities would have reduced direct medical care expenditures by $229.4 billion for the years 2003-2006. The Office of Minority Health in Maryland estimated that health disparities between blacks and whites in 2011 resulted in $767 million additional hospital costs.