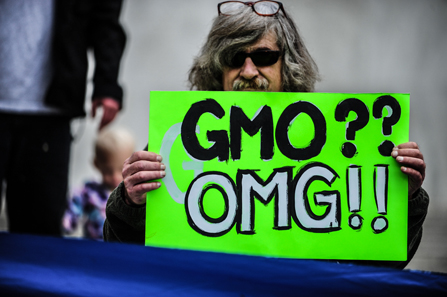 This year, at least half the states may consider requiring special labels on food that has been genetically modified to grow better.

The question of whether to require labels on food with genetically modified organisms (GMOs) pits activists and consumers who favor the labels against big agribusinesses and farmers who generally don't. An estimated 80 percent of food eaten in the U.S. contains GMOs.

The fight has some state attorneys general worried about whether labeling laws would survive court challenges mounted by food producers. Win or lose, it might cost millions of dollars to defend them.

“States are getting somewhat gun-shy about being the lead state that's going to have to pay the attorney fees should there be a successful lawsuit attacking the statute,” Vermont Attorney General Bill Sorrell said at a recent gathering of attorneys general in Washington, D.C.

“It's coming to a number of your states,” Sorrell said. “The politics are huge. Good luck.”

Some consumer and environmental groups disparage GMOs as “Frankenfood.” They contend GMO crops, which include corn, cotton and soybeans, pose unknown health and environmental risks. About half of the 169 million acres of U.S. crop land grew genetically engineered crops in 2013, the U.S Department of Agriculture said in a new report. GMOs are in most cereals, frozen foods, meat, milk, canned soup and even baby formula.

The first genetically engineered plant was a tomato plant developed in 1982, but commercial use of GMO crops didn't begin in the U.S. until 1996.  Large agribusinesses, including Monsanto and DuPont, argue the newest GMO technology is safe, and allows them to produce more food while using less water and pesticides. Labeling could increase the costs to consumers, they say.

The cost of labeling itself would be “a tiny fraction of the costs” of complying with a labeling law, according to a 2013 report by the Washington Academy of Sciences. The real costs would come from having to separate genetically engineered ingredients from other foods, although the report didn't give a precise dollar figure. Those extra expenses would then likely be passed on to consumers. Washington's state budget office estimated it would cost $3.4 million over six years for the state to enforce and administer the labeling requirement that voters considered, and rejected, last year.

The European Union has required GMO labeling since April 2004, although critics say producers are using loopholes in the law to avoid using the labels. Americans overwhelmingly support labeling GMO foods, according to a 2013 poll by The New York Times, which found that 93 percent of respondents favored the labels.

“This is a national movement,” Hawaii Attorney General David Louie said at the recent gathering of attorneys general in Washington. “Don't think that it's not coming to you.” In Hawaii, the issue has been hot at both the state and local levels. Two measures were considered but died in the state's legislature this year, but a new ordinance approved last year on the “Big Island” of Hawaii bans new genetically engineered crops, though it exempts those that are already being grown there, most notably the Rainbow Papaya. Last fall, the Kauai County Council adopted a measure that limits biotech crop and pesticide use on the island of Kauai.

Earlier this year, the New Hampshire House rejected a GMO labeling bill 185 to 162.

So far this year, 67 GMO labeling bills have been introduced in 25 states. In a dozen states, at least one legislative committee has approved a GMO bill. They include Colorado, Illinois, New York, Utah and Vermont, according to Scott Hendrick, who tracks GMO legislation for the National Conference of State Legislatures. Last year, 110 GMO bills were introduced in 32 states, Hendrick said.

Other states with pending legislation on GMO labeling include California, Missouri, Minnesota and Rhode Island. In Arizona, Colorado, Florida, Hawaii and Oregon efforts are underway to put the question on the ballot.

But labeling efforts at the state level elsewhere have faltered. As Stateline has reported, voters in Washington state last year rejected a ballot measure to require GMO labeling in what became the most expensive ballot-question effort ever waged in the state. Food activists and big agribusiness interests spent $40 million on the campaign. California voters in 2012 likewise turned down a labeling initiative.

Costly for States to Defend

The labeling measures could come with a big price tag for states that have to defend them in court.

Before Maine acted, state Attorney General Janet Mills said she warned lawmakers in a 10-page memo that the GMO bill would certainly face significant legal challenges if enacted and that defending it would be costly.  “Without even reading my memo, they went into the back room, caucused 10 minutes and came back out and unanimously passed it. That is how effective I am in my legislature,” she said.

Connecticut Attorney General George Jepsen cautioned that he had to be careful what he said because he might be defending his state's labeling law enacted last year. “I will defend its constitutionality with every effort. But let me put it this way: The year before (it was passed) there was very, very healthy, strong opposition to the bill,” he said.

Referring to last year's effort that pushed the labeling measure through, Jepsen said, “In all my years in politics seldom have I seen a grass-roots movement that was so thorough and so effective in changing the status quo.” Jepsen served 16 years in the statehouse, including six years as Senate majority leader.

Legislation also is moving in Vermont this year. “It might well be that Sorrell who ‘loses the big cases before the U.S. Supreme Court' is going to be there again on this,” Vermont's attorney general said, referring to himself.

In other cases before the U.S. Supreme Court, Vermont has spent up to $5 million in attorney fees. “In a state with a population of 620,000, that's real money,” Sorrell said.  On the labeling front, the state has not had good luck in court: Vermont had a law requiring the labeling of bovine growth hormones, but it was struck down in federal court in 1996.

Critics and proponents of GMO labeling are asking Congress to act, but they are pressing for very different legislation.

A campaign spearheaded by the Grocery Manufacturers Association and the Coalition for Safe Affordable Food, which is comprised of that group and other food producers, supports a federal labeling requirement, but only if the U.S. Food and Drug Administration determines there is a health or safety risk to GMOs.

“That approach will eliminate consumer confusion, avoid an unnecessary and confusing 50-state patchwork of GMO labeling laws and provide consumers with confidence in the safety of the food supply,” said Brian Kennedy, a spokesman for the Grocery Manufacturers Association.

But consumer and advocacy groups deride what they say is the industry's effort to undermine state and federal legislation meant to grant consumers the right to know and avoid GMO foods.

“Attacking state labeling laws does nothing to address the increasing call from consumers for transparent (genetically engineered) food labeling,” the Center for Food Safety said in a statement. The center and other food safety advocates support legislation that would require nationwide, mandatory labeling of GMO products.

The U.S. House added a provision to the federal farm bill that would have overridden state GMO labeling efforts, but the measure was dropped from the final version of the legislation.

Meanwhile, some companies are addressing the GMO issue on their own. Whole Foods Market has announced that by 2018, all products sold in its stores in the U.S. and Canada would have to disclose whether they contain genetically modified ingredients. Cheerios touts that its cereal is without GMOs. And two of the largest supermarket chains in the U.S., Kroger and Safeway, have made commitments not to sell GMO salmon.