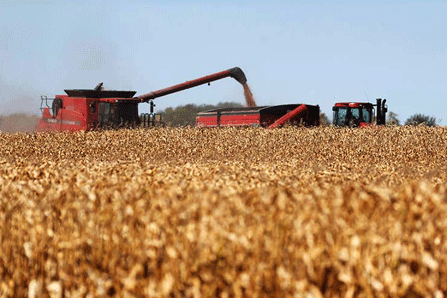 Corn flows from a combine into a grain wagon as harvest workers move through a cornfield on a farm in Aberdeen, S.D. last year. Many South Dakota corn farmers produced a record crop last year, but slow rail service has made it difficult to get grain to market. (AP)

The North Dakota oil boom is creating major headaches for the region's farmers, as both the oil and grain industries put huge strains on rail service on the Great Plains.

The energy and agricultural industries both set production records last year, driving up demand for freight trains at the same time the region's main railroad was rehabilitating its tracks and Mother Nature snarled service with a ferocious winter.

The area's farmers and grain elevator operators have been coping with slow rail service since the big harvest last fall. With no reliable way to ship their products to ports in the Pacific Northwest, elevator operators are heaping millions of bushels of grain in piles on the ground and refusing to buy more from farmers.

With no solution in sight, farmers and grain elevator operators are still worrying about last year's crop even as they prepare for this year's planting season.

“It's very major,” said Todd Yeaton, the manager of the Gavilon grain elevator in Kimball, S.D. In late February, Yeaton said a 110-car train full of grain was still stuck in South Dakota nine days after he loaded it. Normally, that would be enough time for the grain to reach the West Coast. “It's hurting the industry. It really, truly is.”

Burlington Northern Santa Fe (BNSF), the dominant railroad in the region, says it is working aggressively to clear up the delays. But managers at grain elevators are preparing for backlogs that could last until the next harvest season.

The backups are disrupting Amtrak trains and ethanol shipments, as well.

“(BNSF is) acutely aware, and I think, frankly, embarrassed, by their service quality to shippers in that region,” said Joseph Szabo, the federal railroad administrator, who said he has talked with the railroad's CEO about the problem. But Szabo noted that BNSF is in the middle of “intensive” efforts to expand its capacity in the area.

People in the region hope the pain is only temporary.

“I don't think this is anything close to a permanent reality. Like it has done for centuries, business will be flexible and meet the needs that are out there,” said Nathan Sanderson, a policy advisor to South Dakota Gov. Dennis Daugaard, a Republican.

“The good news,” said Amy Casas, a BNSF spokeswoman, “is that there is nothing systemically wrong with the system that cannot be corrected.”

In many areas of South Dakota, last year's harvest was one for the record books. Farmers have increasingly been growing more corn — rather than wheat — which has boosted the productivity of their land. Nationally, American farmers produced more corn than ever last year, beating the previous record set in 2009 by nearly 7 percent. They also produced the third-highest soy bean harvest ever.

But agriculture was not alone in its big boom. North Dakota is now pumping more oil than any other state but Texas. In fact, major railroads carried 96 percent more cars of crude oil in the first three quarters of 2013 than they did during the same period in 2012, according to the Association of American Railroads.

Coal production was also higher than BNSF anticipated. The high demand hit as the railroad was busy working on its tracks to increase capacity in the long run. But in the short run, the construction added to the delays.

Just as things got a little better, winter hit. The extremely cold weather caused even more problems for the railroad. BNSF had to run shorter trains — 4,500 feet long, instead of the normal 7,000-foot length — to make sure the air brakes still worked. Crews had to manually clear frozen switches and had to spend more time indoors. Trains could not travel as fast.

The spring thaw, though, poses its own problems, especially because so much grain is sitting outside waiting for shipment to the Pacific Northwest.

“It's not crisis proportions yet, but it can't sit there indefinitely,” said Bruce Lindholm, from the South Dakota Department of Transportation. The crops could deteriorate in quality or rot.

“It's going to get to a wetter season, and then you'll have moisture and heat, which is a terrible combination for grain,” said Tom Bright, director of merchandising for South Dakota Wheat Growers, a cooperative of 5,400 grain farmers in the region.

Farmers are anxious to bring their crop to the elevators, before rules take effect that limit the weights of trucks on the road during the spring thaw. But elevators are either refusing new shipments or offering such low prices that they discourage farmers from selling.

“We don't stand out due to a lower cost of production. We stand out due to a more optimal transportation system,” he said. “So when you start seeing things like more and more of our rail infrastructure being devoted to other products, that runs the risk of impugning that reputation.”

Steenhoek said Congress could encourage railroads and grain handlers to build more track by passing investment tax credits. The railroads pushed for the incentives several years ago, but shelved those plans in recent years as congressional interest waned.

“We've got an investment problem in this country. We don't have a regulation problem,” Steenhoek said. “We want to do things to encourage greater investment in rural America.”

BNSF says it is already working to improve capacity in the region. It plans to spend $900 million on expansion and maintenance in its northern corridor. That includes 66 miles of second main track in busy stretches, so that trains can pass each other or travel in opposite directions at the same time.

In the meantime, BNSF is sending more locomotives to the area to help reduce delays. It is also hiring more workers and sending more of them to the region, Casas said.

Bright, from the wheat growers organization, said the backlog's effects will continue through this year's harvest. Farmers and grain elevator operators had lots of open storage before last fall, but storage will be in short supply this year. That will add to the demand for freight trains, he said.

Plus, Bright said, it will take the railroad a while before it can get trains back to normal.

“If you're driving down the road and there's an accident, and it backs up traffic for five miles, just because they clear that traffic, that five miles doesn't just all of a sudden start moving,” he said.