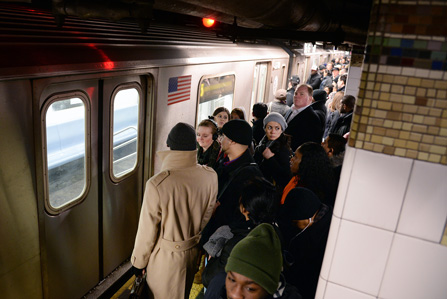 Public transit ridership in the United States last year hit its highest level since 1956, in what transit officials say is a sign of how much Americans' everyday travel habits have changed.

Americans took 10.6 billion trips on transit in 2013, according to data released Monday by the American Public Transportation Association (APTA). That is a 1 percent increase from the previous year, with especially strong growth on rail systems.

It is the highest level since 1956, the year President Dwight Eisenhower signed the law that created the interstate highway system, fuelinga car culture that sapped transit ridership.

The growth last year was the result of an improving economy and expanded services offered by many transit systems, said APTA president Michael Melaniphy.

“The start of the economic downturn and rising fuel prices drove a lot of people to try transit. When they tried it, they found it was really good, and they're staying,” he said.

Public transit ridership over the last two decades has increased by 37 percent, Melaniphy said, while the population has grown 20 percent. The increase in transit use also comes at a time when the number of miles driven by Americans has leveled off, he noted.

Bus ridership, which accounts for more than half of all transit trips, decreased by 0.1 percent.

The surge was led by the New York City subway system, by far the nation's biggest. The 4 percent uptick in subway ridership translated into an increase of 106 million rides. The city's bus system also saw an increase of nearly 2 percent.

The Los Angeles transit system is going through a construction spree right now, because of a sales tax increase voters there approved in 2008. The Los Angeles County Metropolitan Transportation Authority is in the middle of building three rail lines now; by next year it will be working on five.

“It's unprecedented for Los Angeles, the car capital of the world, to experience this transit boom,” said Marc Littman, a spokesman for the county transit agency. He predicted a “quantum leap in ridership” in the next few years, as more of the new lines open.

Fares on the rail system are “a bargain” compared to those in other cities, with a base rate of $1.50 a ride. The costs of taking transit are often lower than what drivers pay to take a car into work, he said.

Bus ridership in the Los Angeles area also saw a slight increase last year, but Littman said the rail service appealed to people who can choose between commuting by car or commuting by train.

“If you go on the Gold Line (a light rail line running from Pasadena to East Los Angeles) in the morning, you will see a lot of commuters there, people in suits, many of them discovering transit for the first time,” Littman said.

A similar dynamic is playing out in Utah, said Michael Allegra, general manager for the Utah Transit Authority, which serves 85 percent of the state's population. The authority has built 140 miles of track in the last 14 years, and ridership during that period has doubled.

Transit would attract even more riders if the authority can offer more frequent service, but it has focused only on peak hours because of budget constraints, Allegra added.

The Fort Myers area was hit hard in the Great Recession, with the unemployment rate climbing to 13 percent, but ridership has jumped over the last three years, said Joann Haley, marketing manager for Lee County Transit.

The agency overhauled most of its routes in 2011, to make sure it was spending its money efficiently. It broke a long, confusing route into two simpler ones. It also increased service to bring residents of a bedroom community to their jobs and secured federal money to upgrade its bus fleet.

Melaniphy, the president of the national transit group, said the increase in ridership supported APTA's calls for more transit money in the federal transportation funding bill Congress hopes to pass this year.

“By making investments now in transportation and public transit… we're assuring this country has a good, consistent, dependable, reliable flow of goods, commerce and people throughout our communities,” he said.

“When you give them choices, the whole system works better. If we get people off the roadways, there's more room to run the trucks and commerce that would otherwise be stuck in congestion and slowing our economy down,” he added.